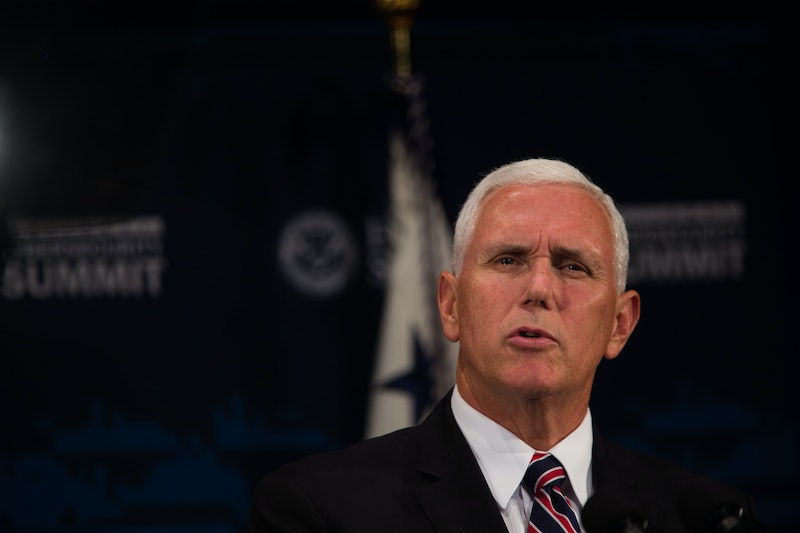 It would be unprecedented for the vice president to suggest his boss be kicked out of the White House, to say the least. But two decades-old articles recently uncovered by CNN shed light on the current VP's apparently strong views on that process. Mike Pence's quotes about impeachment reveal that he believes lying about extramarital affairs translates to an inability to lead the country.

In the 1990s, while former President Bill Clinton was in the throes of the Monica Lewinsky scandal, Pence wrote two columns asserting that Clinton should be impeached for his behavior.

"Further, the President's repeated lies to the American people in this matter compound the case against him as they demonstrate his failure to protect the institution of the presidency as the 'inspiring supreme symbol of all that is highest in our American ideals'. Leaders affect the lives of families far beyond their own 'private life,'" Pence wrote in an column titled "Why Clinton Must Resign or Be Impeached," according to CNN. He goes on to say:

"In a day when reckless extramarital sexual activity is manifesting itself in our staggering rates of illegitimacy and divorce, now more than ever, America needs to be able to look to her First Family as role models of all that we have been and can be again."

In another article from the '90s titled "Two Schools of Thought on Clinton," Pence asserts that Clinton's affair with Lewinsky wasn't a private matter. He cites the fact that she was an intern working at the White House, and that Clinton "may have used the power of his PUBLIC office to cover up the whole sordid matter." He argues that only an affair between the president and a White House outsider could be "truly private" — and even then, only if the president didn't use the powers of the Oval Office to grant his partner any favors or cover up the relationship.

It's impossible to ignore the connection between Pence's words and President Trump's alleged actions today. The current president would pass the VP's first test, as his alleged affairs took place before he moved to Washington.

But someone working as a Trump campaign surrogate did work to sweep at least one of the president's alleged affairs under the rug. Michael Cohen paid adult film star Stormy Daniels $130,000 to keep her account of sleeping with Trump in 2006 to herself ahead of the 2016 election. Trump's 2018 financial disclosure later acknowledged that he reimbursed Cohen for that full amount, although the president maintains that the tryst with Daniels never happened.

A recently published audio recording also revealed Trump and Cohen talking about buying the rights to Playboy model Karen McDougal's story about her own alleged affair with Trump (he denies this one, too). Although there's no evidence that the Trump campaign bought McDougal's story, the tape raised suspicions that it may have coordinated with American Media Inc., which bought her story for $150,000.

Pence made it clear two decades ago that he believes the president should be held to a higher moral standard than the average American. As he put it in one of the columns CNN unearthed:

"If you and I fall into bad moral habits, we can harm our families, our employers and our friends. The President of the United States can incinerate the planet. Seriously, the very idea that we ought to have at or less than the same moral demands placed on the Chief Executive that we place on our next door neighbor is ludicrous and dangerous."

By The Washington Post's count, Trump had made 4,229 false or misleading claims since taking office as of last week. In fact, the number of falsehoods he makes per day has increased in 2018, according to the Post.

"Throughout our history, we have seen the presidency as the repository of all of our highest hopes and ideals and values," Pence wrote in the '90s. "To demand less is to do an injustice to the blood that bought our freedoms."