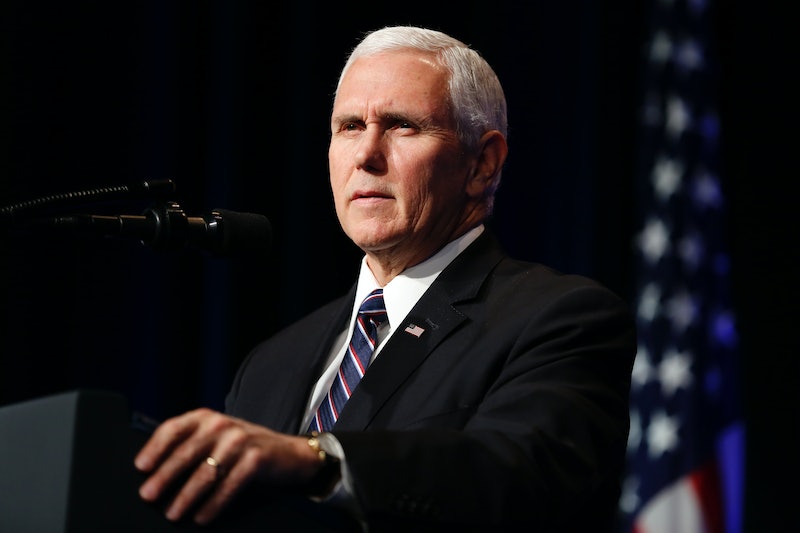 On Face The Nation on Sunday, Vice President Mike Pence used a Martin Luther King Jr. quote to defend Trump's insistence on a border wall — the same insistence that has led to the longest government shutdown in history. Pence's appearance was a part of his effort to support the president's latest proposition to Democratic lawmakers, which offered temporary relief to DACA and TPS recipients.

This weekend was especially important for Americans, Pence told host Margaret Brennan. "You know, the hearts and minds of the American people today are thinking a lot about it being the weekend where we remember the life and work of the Rev. Dr. Martin Luther King Jr. One of my favorite quotes from Dr. King was, 'Now is the time to make real the promises of democracy,'" he said.

Pence said King "inspired" Americans to work together, and then went on to compare his and Trump's efforts. He told Brennan,

You think of how he changed America. He inspired us to change through the legislative process to become a more perfect union. That's exactly what President Trump is calling on the Congress to do. Come to the table in a spirit of good faith.

A "broader discussion about immigration reform" could be possible after re-opening the government, the vice president continued. "We'll secure our border, we'll reopen the government, and we'll move our nation forward as the president has said yesterday to even a broader discussion about immigration reform in the months ahead," Pence said.

The "broader discussion" included Trump's latest proposal, which offered temporary relief for certain undocumented immigrants in exchange for billions to fund the border wall, according to CNN. "What the president presented yesterday really is an effort to bring together ideas from both political parties," Pence said. "I think it is an act of statesmanship on the president’s part to say, 'Here's what I'm for. It includes my priorities.'"

House Majority Leader Nancy Pelosi called Trump's proposal a "non-starter" on Saturday, according to The Hill. "Unfortunately, initial reports make clear that his proposal is a compilation of several previously rejected initiatives, each of which is unacceptable and in total, do not represent a good faith effort to restore certainty to people's lives," Pelosi said in a statement, The Hill reported. "It is unlikely that any one of these provisions alone would pass the House, and taken together, they are a non-starter."

Pence's comments drew scorn from lawmakers and activists. The NAACP tweeted a link to an article about Pence's interview, writing, "This is an insult to Dr. King's Legacy."

Moms Demand Action founder Shannon Watts tweeted that she didn't believe Pence's interview. "I'm not sure which I believe less: That Donald Trump is acting exactly like Martin Luther King in demanding a border wall, or that Mike Pence has a favorite MLK quote (which he has to read verbatim while quoting)," Watts wrote.

California Democrat Jackie Speier tweeted on Sunday that Trump "is no MLK!" in response to Pence's interview. "To equate the legacy of one of America's finest statesmen and champions of civil rights with a vanity project built on racist ideology and hatred is beyond disgraceful," Speier tweeted.