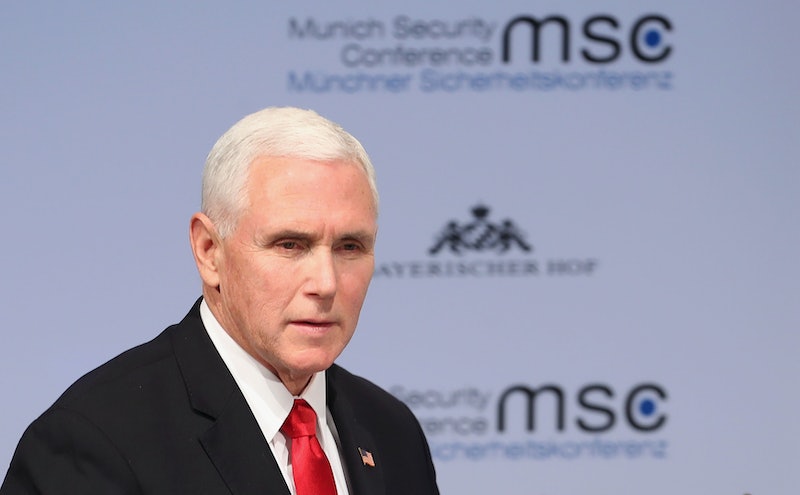 Vice President Mike Pence had an awkward time last week in Europe, when he delivered a couple speeches and literally no one clapped for key lines. Both in Poland and Germany, the vice president gave speeches that seemed geared more for Trump country rather than international security conferences. And then when Pence's Warsaw and Munich speeches didn't receive applause, he seemed visually stunned.

The total silence during his Munich speech on Saturday seemed like a gauge on the popularity of President Donald Trump in the room. Pence acknowledged that he was sent by a "great champion of freedom and of a strong national defense" who has worked with Congress to strengthen "America's military might" and the "leadership of the free world."

Then came the climax of the intro, clearly thought to bring applause. "I bring greetings from the 45th President of the United States of America, President Donald Trump," Pence said. Instead of clapping there was total silence. Pence looked down at his notes and almost appeared as though he were biting his lip to manage how awkward the moment was. Five seconds later, he continued on.

USA Today reported that a copy of the speech that was provided to them by the White House contained a line for applause right there. No one in the audience was having it, though.

This was the second such awkward pause in about as many days. On Thursday, Pence gave another speech in Warsaw, focusing primarily on the Trump administration's efforts to reinstate sanctions on Iran — something European allies have balked at, claiming that the sanctions are working.

"The time has come for our European partners to withdraw from the Iran nuclear deal and join with us as we bring the economic and diplomatic pressure necessary to give the Iranian people, the region, and the world, the peace, security, and freedom they deserve," Pence told the crowd.

When he finished, he paused for some sort of reaction. There was none. And then he visibly shook — kind of like a shiver but just from the neck up — perhaps in shock from the lack of audible support.

Pence was not involved in all the awkward moments caught on tape at the two conferences. There was also a moment when German Chancellor Angela Merkel addressed the Trump administration calling European cars a national security threat.

"Look, we’re proud of our cars and we should be allowed to be," Merkel told the audience. "And these cars are built in the U.S. The biggest BMW factory is in South Carolina, not in Bavaria."

The audience — who liked Merkel's speech generally — gave her a huge round of applause, with the exception of one high profile guest. German public TV Deutsche Welle panned to where Ivanka Trump was sitting, listening to the speech through translation. She did not clap — despite the raucous applause all around her.

Generally, Merkel and Pence's speeches were at odds in content, with Pence calling for increased spending from NATO countries on defense, and Merkel saying if "we're serious about the transatlantic partnership" that attacks like the car national security threat comment are hard to stomach.