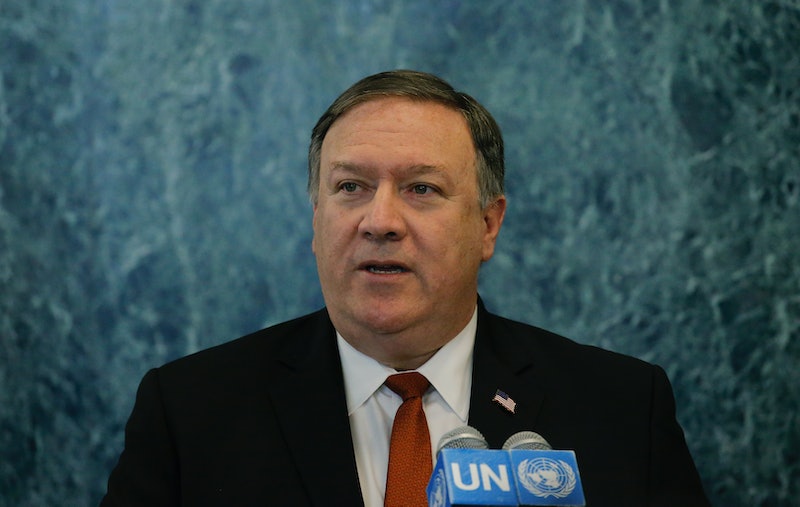 In a letter that laid out the importance of the Bureau of Population, Refugees, and Migration (PRM), dozens of former government officials and humanitarian organization leaders Monday called on the secretary of state to keep the bureau in his department, according to Politico. Many fear that Mike Pompeo might nix the U.S. refugee office, which could have profound implications for asylum seekers and America's international relations.

Pompeo is reportedly approaching a decision soon about the future of the bureau, according to Politico. The signatures of 43 former government official and humanitarian organization leaders were at the bottom of the letter sent to Pompeo and several leaders of Congress.

"We're very concerned that one of the options will be the elimination of the bureau and we're very concerned for two reasons: The symbolic message that is sent when you eliminate a bureau that has refugees in its name. And No. 2 the fact that those authorities under the direct control of the secretary of state give the secretary enormous leverage of political issues of conflict and humanitarian aid," said a former unnamed U.S. official who had signed the letter, according to Politico.

The State Department’s Bureau of Population, Refugees, and Migration oversees the government's refugee program, which has been regarded as a crucial bargaining chip in U.S. diplomacy, according to Foreign Policy. If current 2018 trends hold, as Foreign Policy reported, the United States will have taken in the lowest number of refugees since 1980 — roughly 20,000 to 23,000, an intake that's far less than the historic average and much lower than the 45,000 maximum set by the White House.

Refugees International, an independent refugee and human rights organization, posted the letter to its website. The group's president was one of the signees of the letter.

The same idea to cut the bureau was on the table last year, but former Secretary of State Rex Tillerson refrained after humanitarian organizations and bipartisan legislators argued against it.

The bureau has a budget of about $3.4 billion, and critics argue that pushing the bureau out of the State Department would erode America’s international influence while cementing overseas notions that the United States no longer prioritizes helping refugees escaping war or persecution. The bureau, acting as leverage, "intentionally empowers the secretary of state to set policy and pledge humanitarian assistance in crises" acts as leverage, Foreign Policy explained.

Critics from humanitarian organizations have charged that the gutting of the bureau could be another way to hinder the admission of refugees to the United States. The number of those being accepted into the country, according to Foreign Policy, has slowed to a crawl over the past six months.

"We are convinced that the elimination of PRM’s assistance functions would have profound and negative implications for the Secretary of State’s capacity to influence policy issues of key concern to the United States," the letter to Pompeo reads. "It would also be ironic, as this is one of the bureaus at State that has enjoyed strong bipartisan support over many years."

"It is PRM that has the staffing infrastructure and the expertise to identify refugee groups in need of protection or resettlement, and to understand the diplomatic consequences or opportunities to leverage resettlement for U.S. foreign policy interests," the letter reads toward the end.

The White House has already chipped away at the refugee protections system with a recent ruling that now prevents domestic abuse and fear of gang violence as reasons for claiming asylum. With this potential bureau elimination, the refugee program could be further relegated down the list of the Trump administration's priorities.