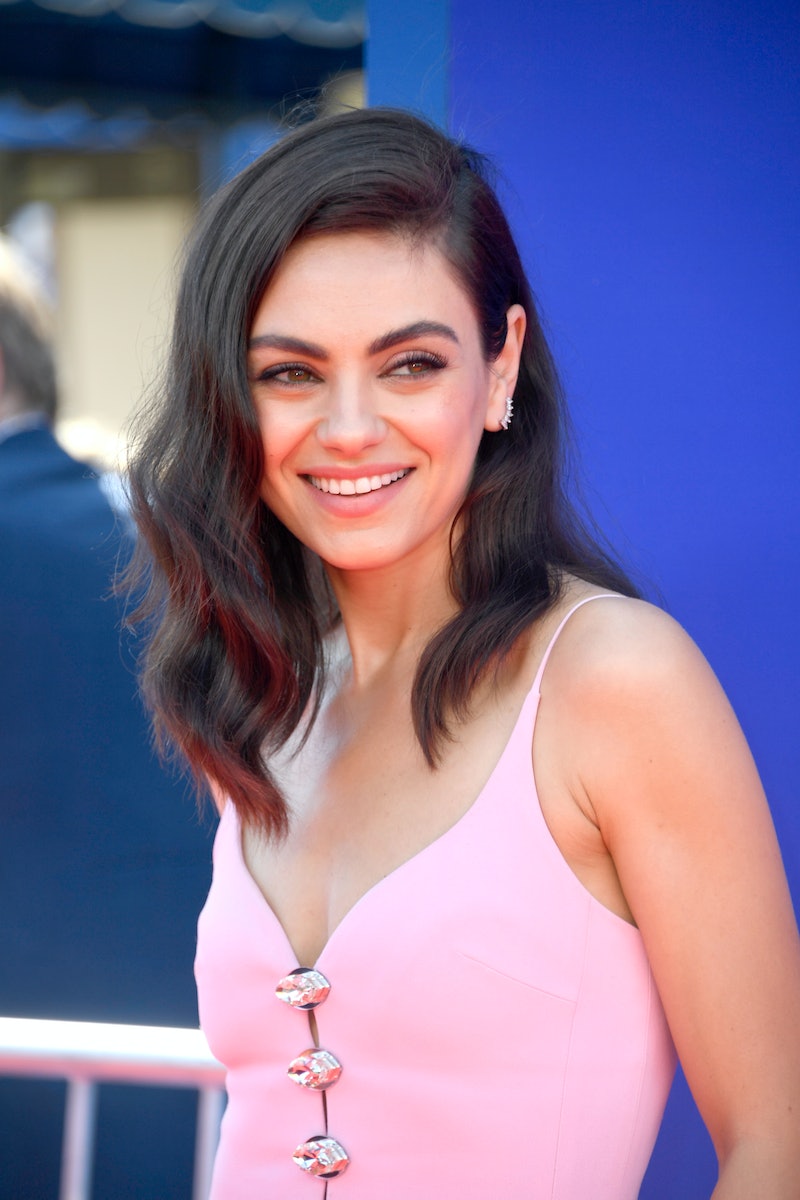 In case you weren't already aware, Mila Kunis and Ashton Kutcher are two of the biggest Bachelor fans out there. And a recent Instagram video from the couple only serves to prove that fact. As E! News noted, Mila Kunis' impression of Bachelor in Paradise's John Paul Jones is so funny that it'll have you reliving the silly reality TV moment all over again.

Days after the Aug. 27 episode, Kutcher took to Instagram on Aug. 29 to post a clip containing the Black Swan's actor's spot-on impression of one of most humorous moments from BiP's latest outing. Naturally, the star had her own take on JPJ and Derek Peth's little argument at Chris Randone and Krystal Nielson's wedding. Although, she almost couldn't even put on that classic JPJ voice, as she was laughing so much at the beginning of the clip. "I can't do it 'cause now I'm laughing," she can be heard telling her husband, who's filming the moment.

She does manage to pull herself together to say one of the most memorable lines from the Aug. 27 episode, as she puts on her best JPJ to say, "Don't question my intelligence, Derek!" Yep, as if JPJ and Derek's drama wasn't silly enough, Kunis' fun impression definitely puts another fun spin on the reality show moment.

While JPJ has yet to comment on Kunis' near spot-on impression of him, his arch nemesis, Derek, did take to the comments section of the post to share his thoughts. In response to the actor's joking plea to not question her intelligence, Derek responded with, "I would never!"

Derek wasn't the only one who was loving Kunis' impression, as Bachelorette and Paradise alum Tanner Tolbert responded to the video with a simple and to-the-point laughing emoji.

Paradise's resident bartender, Wells Adams, was also super into the star's tribute to the BiP fight, as he wrote, "This makes me very happy."

Kunis and Kutcher have been longtime fans of The Bachelor and its associated spin-offs. In fact, back in 2017 during Rachel Lindsay's season of The Bachelorette, the couple even appeared on the series to help out with a group date that contained a “husband material obstacle course."

Prior to their time in front of the screen on the ABC staple, Kunis told Extra in 2016 that she and her husband have bonded over their love of the reality show. When asked about what her guilty pleasure is, she told the publication, "I lay on the couch and watch really bad television which rarely happens but when it does, it feels amazing.” She continued to reveal that the Bachelor shows are amongst her favorites,

"When my husband is home, I can't watch any of these shows, so when he's not home, it's Botched, which is banned from the house or any bad reality shows, so it’s Beverly Hills Housewives, Botched something that you literally don’t think about… But if my husband's home, then we watch The Bachelorette and The Bachelor.”

So, just in case you weren't already aware of Kunis and Kutcher's love of the classic ABC series, their latest BiP-themed Instagram video proves, once and for all, that they're the ultimate Bachelor Nation fans.