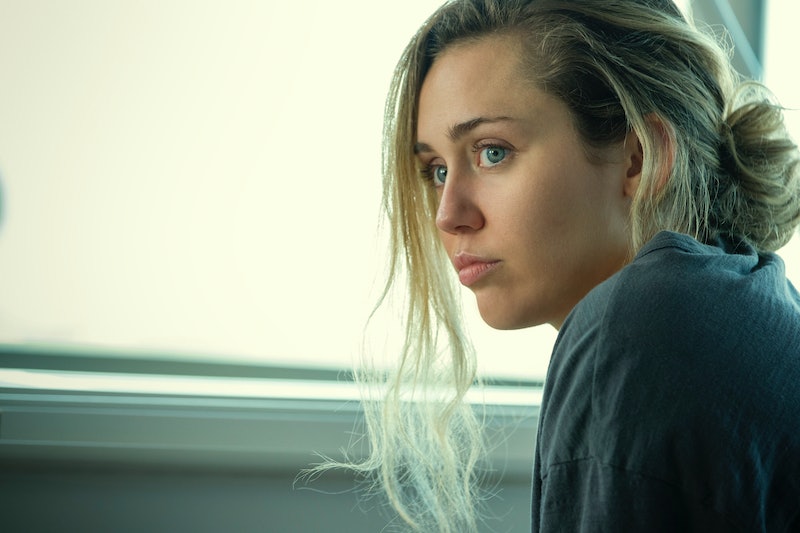 Netflix knows what their viewers want and it's more Ashley O. For all those who watched Miley Cyrus' episode of Black Mirror just for the music, Netflix and Cyrus just dropped the music video for Ashley O's "On A Roll" so you can be as stoked on ambition and verve as this fake pop star who's so good, you'll wish she was real.

In the Black Mirror Season 5 episode “Rachel, Jack and Ashley Too," Cyrus played a pop star struggling for autonomy thanks to her aunt/manager who thinks it's OK to download her personality into an Alexa-like device for fans. While Ashley wants to get a little dark, she's forced to keep making the same corporate pop that sells records. But, if fans thought that Ashley O's pop music sounded oddly familiar, they'd be right.

Ashley O's "On A Roll" is actually an interpolated take on Nine Inch Nails' "Head Like A Hole." With a slight revision, Black Mirror turned the hard edged track into a tongue-in-cheek female empowerment anthem for a pop star with little ownership over own personality, let alone her career.

The video for Ashley O's "On A Roll," which Netflix touted as a "world premiere" when it went live on Thursday (June 13), is the full length clip of the Ashley O video fans only got a glimpse of throughout the episode. In it, a pink-wigged all-white wearing Cyrus prances around singing about "achieving her goals," but those who watched the show know these aren't actually her goals at all. They're her aunt's. But no matter whose goals inspired this song, it's damn catchy.

Fans can thank Black Mirror creator Charlie Brooker for that. He wrote new lyrics for the episode, which featured multiple NiN songs, including "Right Where It Belongs." According to Den Of Geek, Brooker told reporters at a Black Mirror screening in London, that he “got to rewrite [Trent Reznor’s] lyrics in a chirpy way." He added, "I’m not the best lyricist in the world and she’s singing ‘I’m stoked on ambition and verve’ instead of ‘you’re going to get what you deserve.’”

Don't worry, Reznor totally approved of these changes. Black Mirror co-creator and executive producer Annabel Jones told reporters, according to Den Of Geek, that Reznor “thought it was very funny.... There are lots of dark concepts in the film and we just enjoy that sort of childish subversion of them.”

Like most Black Mirror episodes, “Rachel, Jack and Ashley Too" is dark, offering a glimpse of the sinister side of the pop star industrial complex. It's only fitting then that the series picked an industrial band like Nine Inch Nails as inspiration for Ashley O's music.

It's also fitting that Black Mirror chose Cyrus to play Ashley O, who told The Guardian, “There is a part of Ashley O that is not a character. I worked closely with Anne [Sewitsky], the director and the show creators to share some of my personal experiences and help craft the episode.”

That comment from Cyrus is as horrifying as anything in the episode, which ends happily for Ashley O, who gets to embrace her goth side just as she always wanted to. This song's right, Ashley really is on a roll. And, really, so is Cyrus.