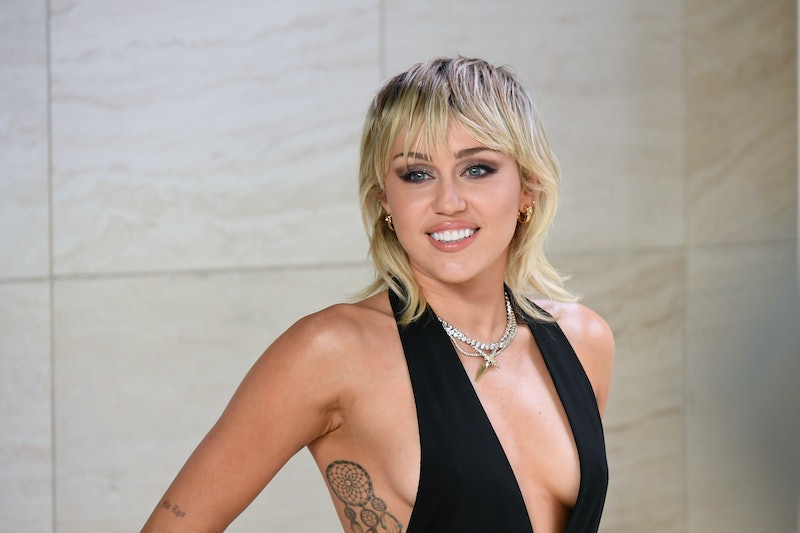 Just a few weeks after chopping her own bangs, Miley Cyrus' pixie mullet made its debut. The cut, done by her mom, takes the singer's existing style up several inches, adds in even more choppy layers, and keeps her Tiger King bangs.

In an Instagram post, Cyrus' hairstylist Sally Hershberger revealed the Bright Minded host's new look, writing, "I trained Tish well!" with a scissor emoji. Hershberger walked Cyrus' mom through the whole cut via FaceTime, according to an interview with InStyle.

The stylist went on to explain the inspiration for the 'do, telling the outlet that Cyrus sent over a photo, and that ultimately the look was collaborative and "completely different" from the original concept. For Hershberger, that's what makes Cyrus a great client. "That’s why I love working with Miley," she told InStyle. "She’s a creative, we work really well together to bring visions to life."

Cyrus' mullet has been through multiple iterations guided by Hershberger. She originally debuted the cut in November, when her mom gave her an at-home chop — which Hershberger later re-did with her own take. Then, in January, the hairstylist added even more shaggy layers and embraced Cyrus' natural waves.

More like this
Blake Lively Debuts Red Hair For The 'It Ends With Us' Film Adaptation
By Olivia Rose Rushing
The Best Beauty Looks Spotted At Paris Couture Week 2023
By Audrey Noble
Hailey Bieber's New Bob Is Short Haircut Goals
By Olivia Rose Rushing
Pamela Anderson's Most Iconic Makeup & Hairstyle Moments
By Olivia Rose Rushing
Get Even More From Bustle — Sign Up For The Newsletter
From hair trends to relationship advice, our daily newsletter has everything you need to sound like a person who’s on TikTok, even if you aren’t.