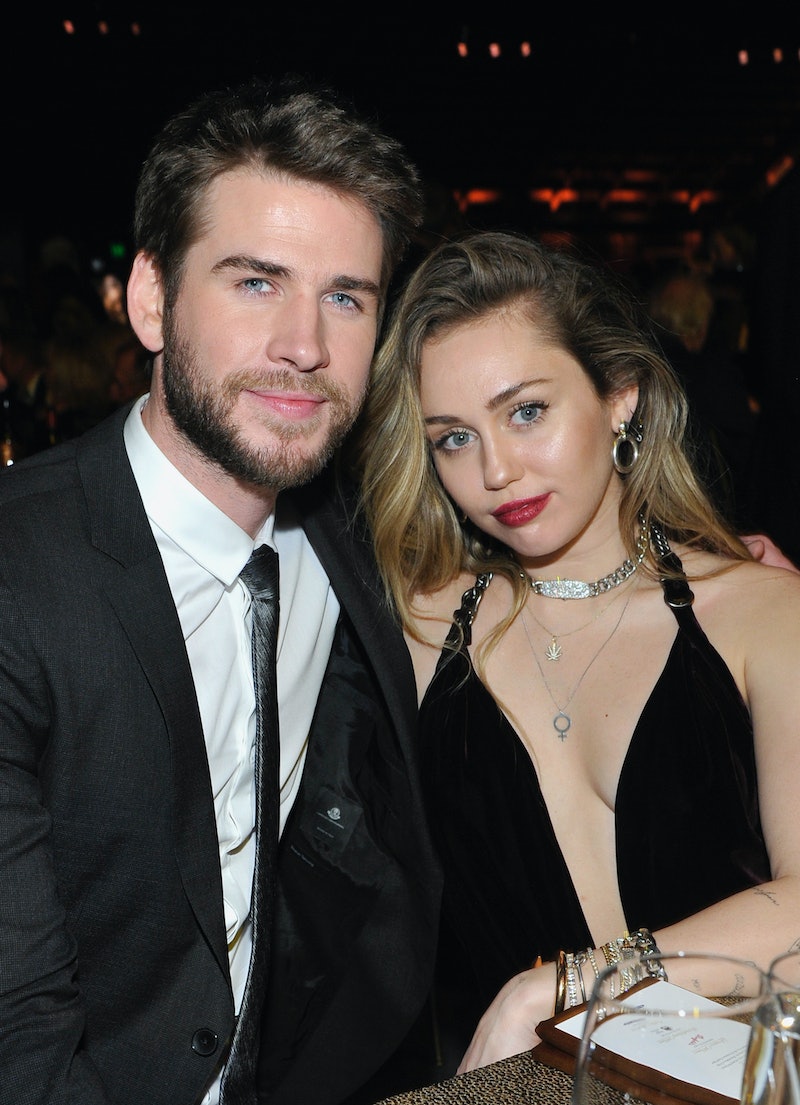 Ever since Miley Cyrus and Liam Hemsworth tied the knot in December, more and more intel about their nuptials just keep trickling out, making it seem like an even more special day than it already did. On Sunday, Cyrus shared new wedding photos and details about her big day, and not only does it seem like she and her family had a blast, but it also seems like it was truly a day filled with all of her favorite things.

First things first: Puppies. Cyrus has always been outspoken about how important animals are to her — in particular, her animals. In fact, last year, when she was on The Tonight Show Starring Jimmy Fallon, she listed their family as including seven dogs, four cats, horses, and pigs, all of which she and Hemsworth managed to rescue from the California wildfires when they reached their Malibu home, which is seriously impressive. So of course, it's not surprising at all that in Cyrus' latest wedding update, her dogs were invited to her wedding, too.

"You can always find me barefoot on the floor playin w my puppies ... even at my own wedding," Cyrus wrote in one tweet, along with photos of herself in her wedding dress, snuggling her pup.

It's so sweet that Cyrus has these memories (and photos) involving her pup from her wedding day. She'll probably look back on these pictures and cherish them forever, because honestly, the only thing that could possibly make a wedding day more epic — you know, besides the fact that it's the day you agreed to spend the rest of your life with the person you love in front of your friends and family — is puppies.

Her other wedding tweet involved food, which is almost as important as puppies are. In the photo, Cyrus is sitting between her sisters Noah Cyrus and Brandi Cyrus, chowing down on wedding food straight out of the chafing dishes on the buffet line.

Anyone who's ever been to a wedding knows how torturous a long buffet line can be at the reception, so clearly, Cyrus fully took advantage of not having to wait. Or, apparently, even having to use a plate.

And speaking of Cyrus' family? She also shared a sweet photo with her mom, Tish, posing with her bouquet... while listing out all of the things that her mom told her not to do with her bouquet as a bride:

And earlier in the week, she had shared a photo of herself with her bouquet doing all of those things, so... there's proof that she didn't listen to any of her mom's advice. But since Cyrus was the bride, she was also allowed to do whatever she wanted with her bouquet.

The more they share about their day, the clearer it becomes that Cyrus and Hemsworth's wedding was all about love — and all of the things (and animals... and people) they love. And when it comes to saying your vows to the love of your life, isn't that what matters most?