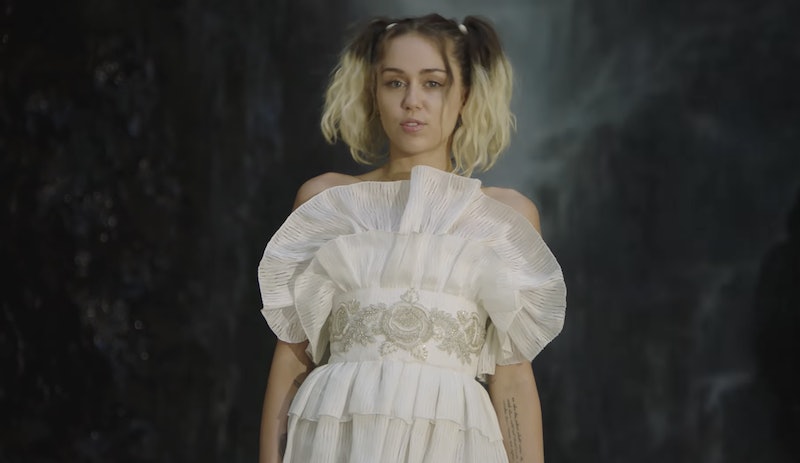 Since rekindling their romance, Miley Cyrus and Liam Hemsworth have been giving us all hope that true love does exist after all. And now that Cyrus' new song "Malibu" is out, we have proof that the couple are stronger than ever. Basically, the "Malibu" lyrics about Liam Hemsworth are the perfect tribute to the life they have together — but we should have seen that coming. On their break-up and subsequent reunion, the singer told Billboard in May 2017, "We had to re-fall for each other." It's more than a little exciting to get so much extra detail about the couple's love story throughout her new song.

Billboard highlighted the importance of the song's title, which refers to the place she calls home with Hemsworth. The magazine wrote, "In Malibu, when she’s not making music or doing two hours of Ashtanga yoga daily, Cyrus says she likes nothing better than walking her dogs or grocery shopping, where she’s generally unbothered." The song is the perfect tribute to her relationship with Hemsworth and the house they share together, which apparently includes "seven dogs, two pigs, two miniature horses" and the famous couple.

As well as referring to the couple's break-up and subsequent reunion, "Malibu" paints a picture of the tranquil life that Hemsworth and Cyrus live together.

"Malibu" is all about discovery for the singer. Hemsworth introduces her to new experiences and places, and she thanks him for for bringing her to Malibu, which they now call home.

I never came to the beach, or stood by the ocean

I never sat by the shore, under the sun with my feet in the sand

But you brought me here and I'm happy that you did

'Cause now I'm as free as birds catching the wind

Her new single tells such a personal story, about the growth and transformation that's taken place in her life thanks to Hemsworth. When there are things in life that she can't comprehend, he is there to reassure her.

I always thought I would sink, so I never swam

I never went boatin', don't get how they are floatin'

And sometimes I get so scared of what I can't understand

The simple chorus is super romantic, and it feels as though there is nowhere Cyrus would rather be.

But here I am, next to you

The sky's more blue in Malibu

Next to you in Malibu

As "Malibu" continues, it becomes clear that she savors every moment of her unexpected second chance with Hemsworth. The fact that she would "spend the rest of my life standing here talking" with him shows just how deep their connection runs.

We watched the sun go down as we were walking

I'd spend the rest of my life standing here talking

You would explain the current, as I try to smile

Hoping I just stay the same, and nothing will change

And it'll be us, just for a while

In their Malibu home, Cyrus and Hemsworth have found their own private sanctuary. By asking "Do we even exist?," she draws attention to just how magical she finds their relationship and the place they live.

Do we even exist?

That's when I make the wish, to swim away with the fish

Is it supposed to be this hot all summer long?

In the most romantic lyrics of the entire song, Cyrus is stunned by the fact that she has fallen back in love with Hemsworth. She didn't believe a reunion was possible, but now she's writing about it. It's totally meta, and adorable.

I'd be here writing this song

The song ends in the most perfect way, with her thanking him for every time he's ever saved her. Clearly, his love and support has changed her life immeasurably, and it's beyond beautiful that she decided to share these feelings with her fans. Their life together in Malibu sounds picturesque.

We are just like the waves that flow back and forth

And you're there to save me

And I wanna thank you with all of my heart

It's a brand new start

A dream come true in Malibu

Her newest single takes her music in a brand new direction that fans are sure to love. The way she's embraced her new life and her love of Hemsworth is totally adorable and should make everyone excited for her new album.