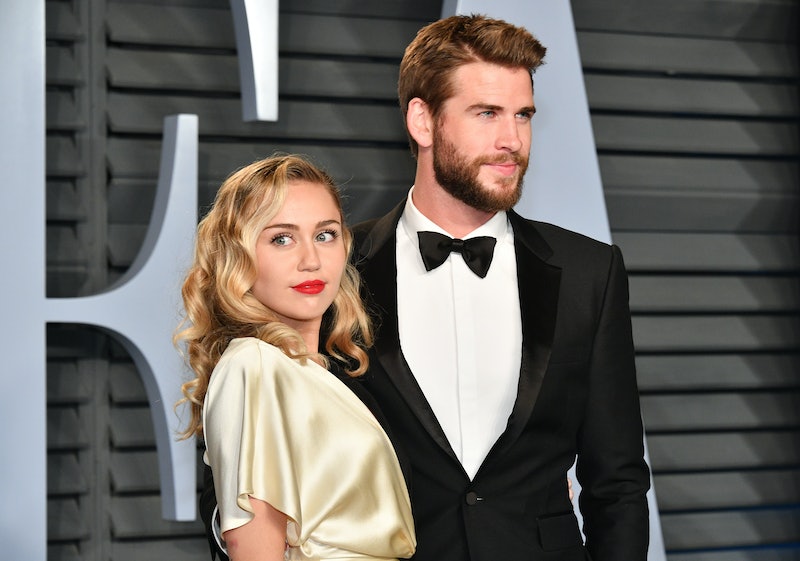 Her marriage to Liam Hemsworth isn't a traditional one, so much so that Miley Cyrus is redefining what it means to be a wife. As ELLE's August cover star, Cyrus opened up about how she doesn't feel forced into a "stereotypical" wife role. The 26-year-old refuses to hide her true self nor will she allow society to tell her how she must act, especially when it comes to being married to Hemsworth.

While discussing their marriage (they tied the knot in December 2018 after a decade together), Cyrus admitted her relationship with Hemsworth is vastly different than most. Actually, because they don't have the typical marriage, Cyrus prefers to keep their personal life as private as possible and mainly because she doesn't feel like the world right now will understand. She explained,

“I think it’s very confusing to people that I’m married. But my relationship is unique. And I don’t know that I would ever publicly allow people in there because it’s so complex, and modern, and new that I don’t think we’re in a place where people would get it."

Cyrus is queer and is also sexually attracted to women, despite being in an opposite sex marriage.

All of this might be hard for people to understand. But, like Cyrus told ELLE, even though her marriage to Hemsworth isn't the so-called traditional type, it works for them. She said,

"I mean, do people really think that I’m at home in a f*cking apron cooking dinner? I’m in a hetero [sic] relationship, but I still am very sexually attracted to women. I made a partner decision. This is the person I feel has my back the most. I definitely don’t fit into a stereotypical wife role. I don’t even like that word."

In February, the "Mother's Daughter" singer admitted to Vanity Fair that she and Hemsworth didn't get married for an "old-fashioned" reason. She views their relationship as "New Age." Cyrus discussed with the publication what it's like for them to redefine "what it looks like for someone that’s a queer person like myself to be in a hetero [sic] relationship." Cyrus continued,

"A big part of my pride and my identity is being a queer person. What I preach is: People fall in love with people, not gender, not looks, not whatever. What I’m in love with exists on almost a spiritual level. It has nothing to do with sexuality. Relationships and partnerships in a new generation — I don’t think they have so much to do with sexuality or gender. Sex is actually a small part, and gender is a very small, almost irrelevant part of relationships."

Even when it comes to Cyrus' new album, She Is Miley Cyrus, the musician is sending a message about gender. "My record is called She Is Miley Cyrus. 'She' does not represent a gender," she explained to ELLE. "She is not just a woman. 'She' doesn’t refer to a vagina. She is a force of nature. She is power. She can be anything you want to be, therefore, she is everything. She is the super she. She is the she-ro. She is the She-E-O."

Cyrus has always marched to the beat of her own drum. She embraces her true self and won't allow any outside negative influences to change who she is or how she views being Hemsworth's wife.

So for those who aren't entirely clear on Cyrus and Hemsworth's marriage, all anyone needs to know is that they are two individuals who love and support one another. They have what sounds like a strong partnership that will never fall under a certain category. All that matters is Cyrus' marriage to Hemsworth works and they don't need to be the stereotypical wife or husband in order to have a happy life.

More like this
5 Wild Theories About Miley Cyrus’ “Flowers” Music Video
By Jake Viswanath
"Lavender Haze" Star Laith Ashley Breaks Down Filming With Taylor Swift
By Jake Viswanath
9 Photos Of Celebrity Couples & Unexpected Duos At The 2023 Grammys
By Jake Viswanath
Bennifer's Relationship Timeline Now Includes A Grammy Date Night
By Jake Viswanath
Get Even More From Bustle — Sign Up For The Newsletter
From hair trends to relationship advice, our daily newsletter has everything you need to sound like a person who’s on TikTok, even if you aren’t.