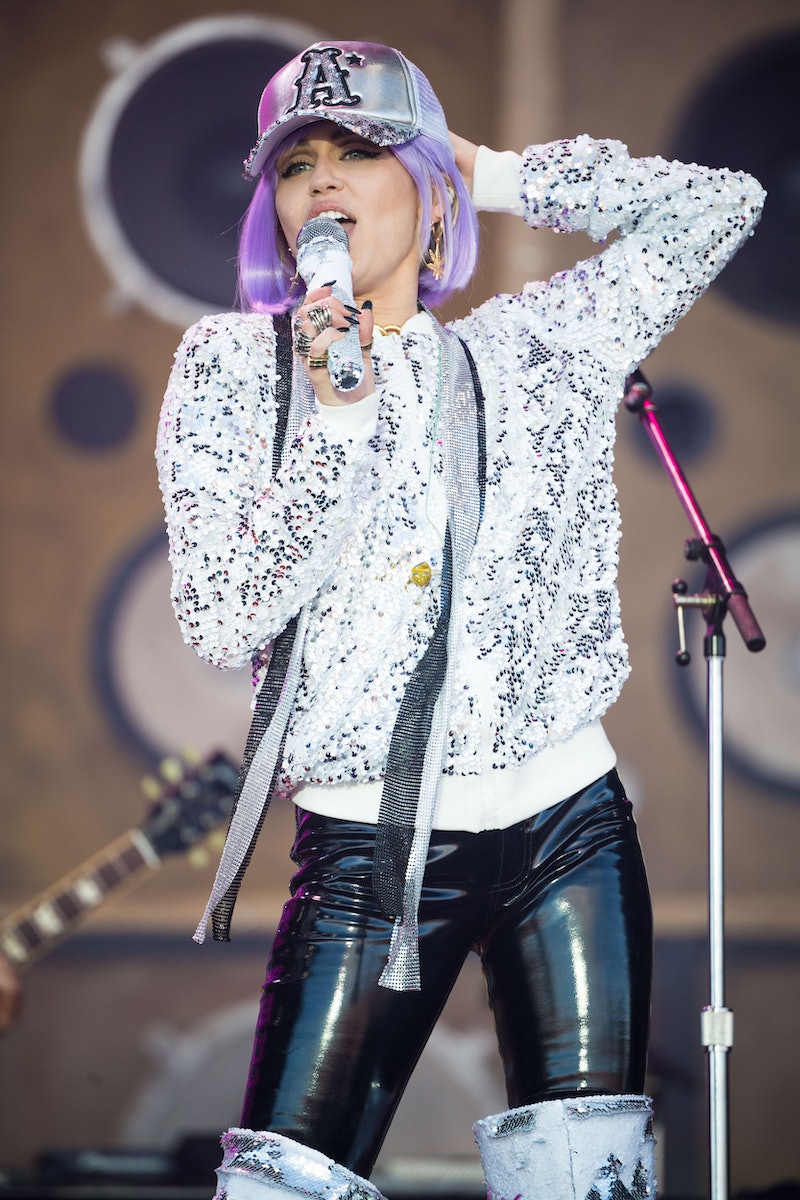 The internet's favorite popstar right now just might be Ashley O. No, she's not technically a real person, but her song "On A Roll" is a certified pop jam that has spawned an endless amount of memes, and Miley Cyrus isn't letting her die anytime soon. During her set at the 2019 Glastonbury Festival, Miley Cyrus performed as Ashley O, her now infamous Black Mirror persona, and fans couldn't get enough of the fictional pop sensation.

Cyrus had a few surprises up her sleeve for her highly anticipated Glastonbury performance on the Pyramid Stage on Sunday, June 30, but perhaps none were more important than the real-life revival of Ashley O. Toward the end of her set, Cyrus strutted onto the stage decked out in a glittering hoodie with a matching cap and thigh-high boots, with Ashley's now-iconic lavender wig on her head, to belt out the hilarious and uber-catchy lyrics of "On A Roll."

The song is a reworked version of the Nine Inch Nails hit "Head Like A Hole," and appears in Cyrus' recently released Black Mirror episode "Rachel, Jack, and Ashley Too." And although it looked like she was having a blast performing the song live for the first time, in typical Miley fashion, the singer followed up the live debut of "On A Roll" by ditching her sparkling ensemble and covering the actual NIN song. The crowd couldn't get enough of Ashley O's unexpected guest appearance, with some fans in the distance even spotted wearing the wig themselves.

Spoiler alert: the happy-go-lucky performance was a stark contrast to the Ashley O that viewers saw on Netflix's Black Mirror. On the show, Cyrus played a famous pop star who wants to go into a new creative direction, but is drugged into a coma by her aunt-slash-manager, who intends to substitute her with a hologram to keep Ashley's public image alive. Talk about dark.

"We were discussing the rise of holographic versions of artists — Prince and Whitney Houston and Amy Winehouse," Black Mirror producer Charlie Booker told Entertainment Weekly about the inspirations of Ashley O. "It’s notable these people often pass away in extremely tragic circumstances. They’ve been chewed up by the fame industry and now they’re being resurrected. It’s extremely ghoulish. And we were thinking of A.I. too — what if you could program something that could write like John Lennon?"

Despite Ashley O stealing the spotlight, Cyrus also shined at Glastonbury as herself. The singer delivered a few crowd-pleasing surprises, singing a touching cover of Amy Winehouse's "Back to Black" alongside Mark Ronson, and in an unexpected but thrilling moment, bringing out her dad Billy Ray and newly out rapper Lil Nas X to perform their number one smash hit, "Old Town Road," which has officially taken over the entire world at this point.

The only thing that would've captured the zeitgeist more than Miley, Billy Ray, and Lil Nas X rocking out to "Old Town Road" together was if Ashley O was on that stage performing with them. A mash-up performance of "On A Roll" and "Old Town Road" is what the world deserves.

More like this
5 Wild Theories About Miley Cyrus’ “Flowers” Music Video
By Jake Viswanath
Twitter Is Roasting Liam Hemsworth Thanks To Miley Cyrus' New Song “Flowers”
By Jake Viswanath
Ariana Grande & Kristin Chenoweth Sing A Wizard Of Oz Classic On TikTok
By Alyssa Lapid
Beyoncé & Blue Ivy Performed A "Brown Skin Girl" Duet At Her Private Dubai Concert
By Brad Witter
Get Even More From Bustle — Sign Up For The Newsletter
From hair trends to relationship advice, our daily newsletter has everything you need to sound like a person who’s on TikTok, even if you aren’t.