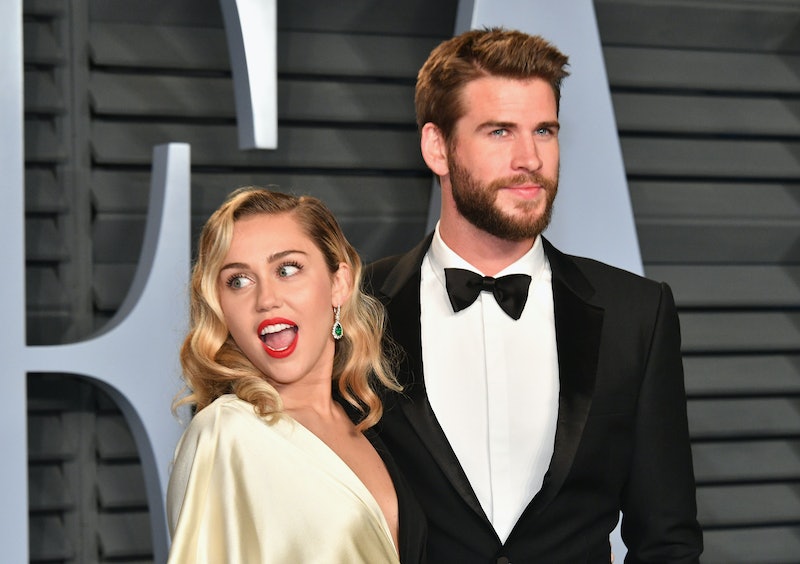 After tabloids reported — again — that she was expecting a baby with husband Liam Hemsworth, Miley Cyrus shut down pregnancy rumors with a bit of pop culture humor. Let's just say, it didn't go over easy (get it?).

The Daily Mail initially latched on to the rumor, tweeting out a photo of Cyrus wearing a loose top and quoting an unnamed source who claimed she was pregnant. In response, Cyrus photoshopped a picture of the infamous @world_record_egg egg — the one with the most-liked photo on Instagram — over her supposedly pregnant belly, adding her signature tongue-sticking-out mouth over the egg.

"I’m not 'Egg-xpecting' but it’s 'Egg-celent' to hear everyone is so 'Happy For Us' .... we’re happy for us too! 'Egg-cited' for this next chapter in our lives.... Now , can everyone leave me alone and go back to staring at an egg," she wrote on Twitter.

Given her celebrity status, it's probably not too surprising that Cyrus is frequently the subject of tabloid pregnancy speculation. In October, she made headlines after she was seen shopping for baby clothes, and in 2017 celebrity gossip cites deemed her pregnant for posing with her hand on her stomach. "RUDE!!!" she tweeted at the time, "Not pregnant just eating a s*** ton of tufurkey (sic)".

The world-famous egg Cyrus invoked has become something of a cultural phenomenon since its account hatched on Instagram earlier this month. To date, it has a single post, an unassuming stock photo of a brown egg with a simple goal: "Let’s set a world record together and get the most liked post on Instagram," its caption reads.

Previously, the title of most-liked photo on Instagram was held by Kylie Jenner, who in February posted a photo of her newborn baby Stormi, which garnered upwards of 18 million likes. The @world_record_egg egg account posted its one brown egg on Jan. 4, and as of Wednesday has nearly 47 million likes. Also joining in the meme, Jenner posted a video of herself cracking a brown egg onto some asphalt shortly after she lost her title. "Take that little egg," she wrote in the caption.

As basically pointless viral memes go, this one brown egg is definitely not the first of its kind. Twitter's half an onion set out two years ago simply to get more followers than the president, a goal which, unlike the egg, it has not achieved. "You just remember who paved the way for you, egg," @HalfOnionInABag tweeted after @world_record_egg achieved its goal.

Nonetheless, @world_record_egg has gotten plenty of celebrity attention in the last few weeks, including Cyrus'. In addition to using it to dispel pregnancy rumors, she posted another photoshopped photo on Wednesday, this time to promote her latest music collaboration with Mark Ronson. Co-opting the song's title, "Nothing Breaks Like A Heart," she posted a photo on Twitter from her Vogue Easter photoshoot, featuring her standing with Easter basket in front of a giant golden egg. "Nothing Breaks Like an EGG!" she wrote.