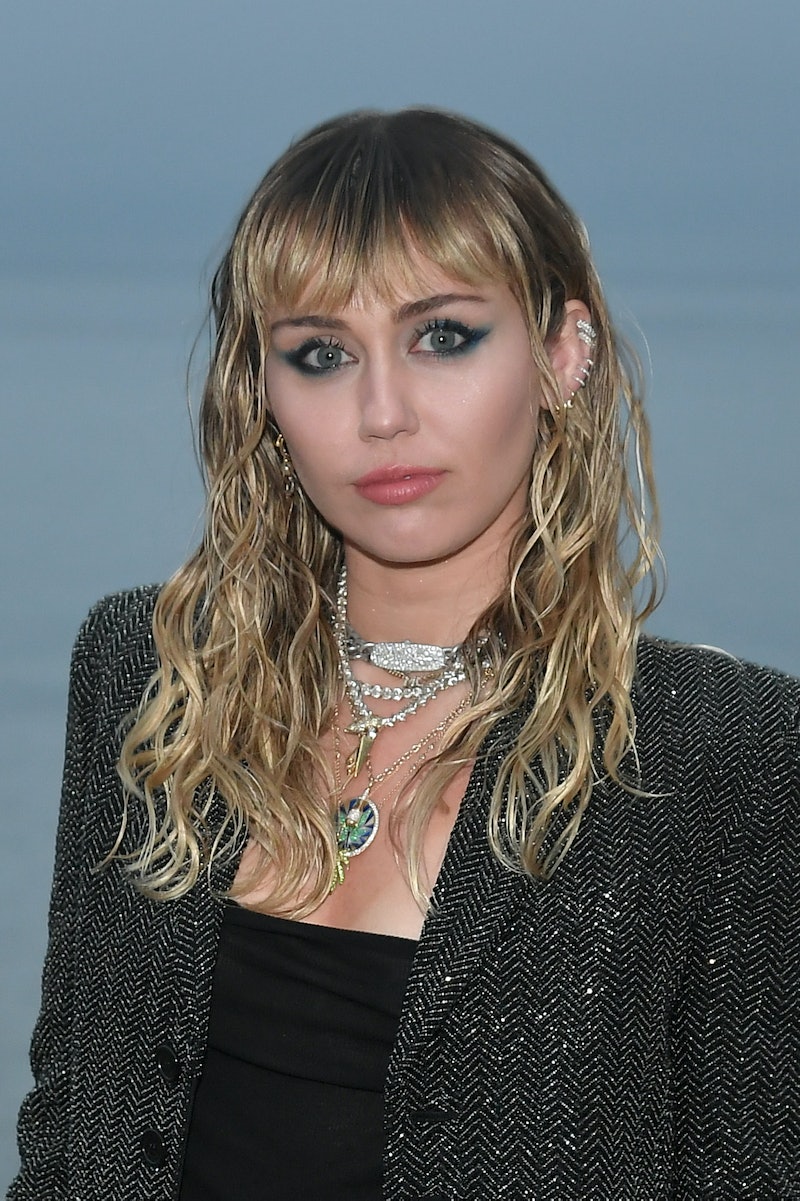 As a longtime LGBTQ+ advocate, who once said, "A big part of my pride and my identity is being a queer person," Miley Cyrus' latest comments about sexuality are sparking backlash for implying being gay is a choice. On Sunday, Cyrus did an Instagram Live with Cody Simpson, who she began dating earlier this month, and claimed her "hardcore feminist vibes" prevented her from letting anyone get close in past relationships — yikes.

UPDATE: On Monday afternoon following the backlash, Cyrus clarified her original comments in an Instagram Story. The singer wrote:

"I was talking sh*t about sucky guys, but let me be clear, YOU don't CHOOSE your sexuality. You are born as you are. It has always been my priority to protect the LGBTQ community I am a part of. Happy Monday!"

EARLIER: Cyrus attempted to rationalize her comment by saying that she now realizes that women "don't have to be gay" and "you gotta find a dick that's not a dick." For the cherry on top, Cyrus said, "I always thought I had to be gay because I just thought all guys were evil," noting Simpson was an exception to that rule. "There are good people out there that just happen to have dicks. I've only ever met one and he's on this Live," she said, referring to Simpson who was in the room.

These regressive comments have caused people on Twitter to call out Cyrus for making it seem like people are queer simply because they decided, to use her words, to "give up" on men. One user noted that the notion people "choose "to be gay is misguided and only perpetuates stereotypes, while someone else stated the singer's seemingly anti-feminist, homophobic comment lets down many of her followers. (Bustle reached out to Cyrus' rep for comment on this backlash, but didn't receive an immediate response.)

Some fans believe, however, that the "Slide Away" singer was just joking. One person defended Cyrus by pointing out her LGBTQ+ advocacy, writing, "she has an entire foundation for homeless LGBTQ teens. It was awkwardly phrased, but she meant no harm." Another fan claimed that since Cyrus identifies as pansexual, she was "kinda making fun of herself." But even if it was a joke, another fan may have summed it up best, writing, "she shouldn't have said it regardless."

In the past, Cyrus has spoken out about how queer identity is valid, regardless of anyone's relationship status. "People fall in love with people, not gender, not looks, not whatever. What I’m in love with exists on almost a spiritual level. It has nothing to do with sexuality," she told Vanity Fair in February. At the time she was still married to Liam Hemsworth and explained, "We’re redefining, to be f*cking frank, what it looks like for someone that’s a queer person like myself to be in a hetero relationship."

In August, after Cyrus and Hemsworth split and she was first spotted with now-ex Kaitlynn Carter, a Twitter user blamed the breakup on Cyrus' sexuality in a since-deleted post. Fellow singer Halsey hopped in to defend her, writing in part, "Stop being afraid of women who aren’t afraid to do what pleases them and not other people."

While sexuality exists on a spectrum and only Cyrus knows how she identifies, her new comments perpetuate harmful stereotypes regardless. And as someone who's been such an advocate in the past, including starting a charity dedicated to fighting injustices facing LGBTQ+ youth, Cyrus has led her fans to expect better.

More like this
Twitter Is Roasting Liam Hemsworth Thanks To Miley Cyrus' New Song “Flowers”
By Jake Viswanath
5 Wild Theories About Miley Cyrus’ “Flowers” Music Video
By Jake Viswanath
Breaking Down Miley Cyrus' Full "Flowers" Workout Routine
By Carolyn Steber
Taylor Lautner Thought Taylor Swift's 2009 VMAs Interruption Was A "Skit"
By Alyssa Lapid
Get Even More From Bustle — Sign Up For The Newsletter
From hair trends to relationship advice, our daily newsletter has everything you need to sound like a person who’s on TikTok, even if you aren’t.