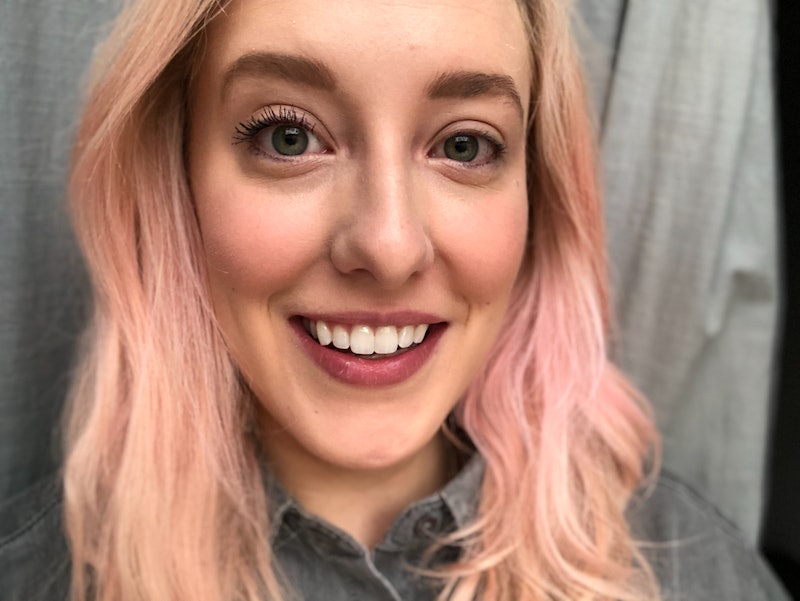 CBD oil is having a bit of a moment in the beauty world, finding its way into everything from bath bombs to moisturizer to fragrance —and now, Milk Makeup's Kush Mascara, which hit shelves on 4/20 (natch). While people often say the ingredient relieves minor aches and pain, the New York Times reported about CBD oil's hydrating properties in January, which is exactly why Milk loves the stuff for a mascara formula. According to the brand, the cannabis oil conditions the lashes, which helps prevent breakage. Plus, the oil really locks on to the fibers in the formula to create a lengthening and volumizing effect. Bonus for animal lovers: CBD replaces the beeswax found in a lot of natural-leaning mascaras, making this one completely vegan, just like the rest of Milk's products.

In addition to the conditioning CBD oil, the Kush Mascara has unique heart-shaped fibers (check 'em out in the video below). The brand claims they fuse better to the oil than traditional tube-shaped fibers, so you won't get that midday fallout so common with other fiber-based formulas. Plus, the brand claims that the heart shape helps the fibers lock on to each other, which creates the appearance of even more volume on your lashes.

As someone with blonde, shortish lashes, I was eager to test out a mascara that promised "one hit for high volume." One detail I didn't think I'd care about at all, but noticed immediately: The silver packaging Kush comes in is pretty heavy for a mascara, which made it feel extra fancy in my hands (it costs $24, putting it in the mid-range makeup price point).

The "tree-shaped Puff Puff" brush appears to be a pretty standard volumizing brush, with lots of medium-stiff bristles that help separate and lift lashes while depositing lots of the inky black mascara formula. A less standard aspect is the scent: At the press launch event for Kush earlier in April, a brand rep explained to me that because this mascara has no chemicals or animal by-products, you don't get that distinct... mascara-y scent that most traditional formulas come with.

I won't say this has the most incredible fragrance I've ever put near my nose — nor, as a person who doesn't have any sort of scent sensitivity, is this something I particular care about when it comes to eye makeup. However, if you are looking for mascara with a light, fresh fragrance, Kush is probably going to make you happy.

While the pleasant smell and weighty packaging are all well and good, I've tested enough mascaras with big promises to know looks are far from everything. I was especially wary of a product that seemed like it was doing an over-the-top bit about CBD culture. In fact, after just one swipe, I wasn't totally convinced that I'd ever use the metal business card that came with the press kit and promised I could text my "dealer" anytime I needed more Kush delivered to my desk. The formula is very light-weight; one coat separates and lengthens your lashes, but it didn't give me the immediate volume I thought I was getting myself into.

However, after three layers of the stuff, I was completely enamored. I like a mascara that builds well on itself, instead of delivering loads of product on the very first swipe or making my lashes clump together with each layer. I'm calling the final look Dramatic Natural: No one would confuse my real lashes for falsies, but it gives plenty of volume for a day at the office.

Here I am wearing the Kush mascara on one eye (A), feeling thoroughly thrilled with the results.

My eyes usually start to water uncontrollably at the mere mention of any type of eye makeup, but although Milk doesn't advertise this as being specifically good for people with sensitive eyes, I didn't feel any sort of itchiness, burning, or other irritation all day. Perhaps all that CBD oil helped my eyeballs mellow out a little bit.

Since Milk claims their heart-shaped fibers prevent fallout, I snapped a photo at the end of the day to document how well the formula had held up. After nine hours at the office and two more out to dinner, a few flakes gathered underneath my right eye, but overall I was impressed with how well the mascara gripped to my lashes.

A mascara that holds up so well all day can often be a nightmare to take off, but not this one. I was able to completely remove Kush with a gentle micellar water — and didn't experience any stinging during that process, either.

So it's official: I'm convinced CBD oil isn't just a buzzy gimmick (even if releasing your CBD oil product on 4/20 totally is) and I've found a vegan mascara that works just as well (if not better) than my usual stuff. Guess I'll be texting Milk's dealer after all.