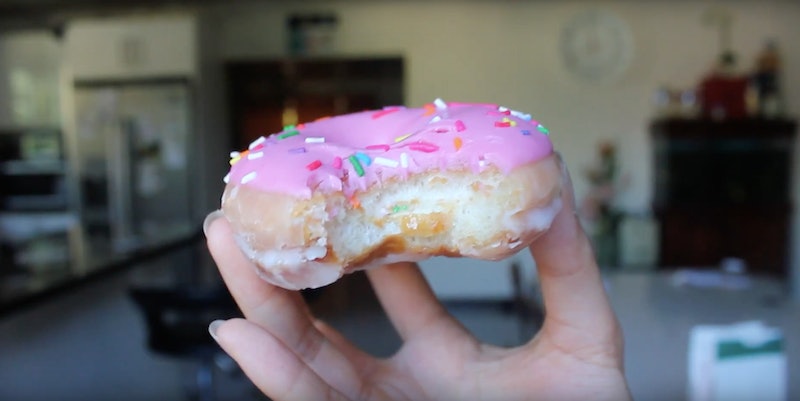 Homer Simpson was way ahead of the millennial pink trend. He's been noshing on millennial-pink doughnuts since 1989, but the pastry world is finally catching up with him. Millennial pink Krispy Kreme doughnuts are a thing, and they're straight out of The Simpsons — but there's just one catch. These precious pink treats are only available in Australia. D'oh!

"Taking inspiration from Homer Simpson’s favorite snack of all time is our newest creation — The Simpsons D’ohnut," Krispy Kreme Australia noted on its website. "It’s everything that the iconic doughnut is. Only, it’s real and oh so delicious!"

Though it's totally Instagram worthy, the picture really doesn't capture how mouth watering these millennial-pink Simpson D'ohnuts sound. They're "hand dipped in white-choc truffle with strawberry flavor with a smattering of rainbow sprinkles." Got a trip down under on the books? You can grab yourself one of these delicious doughnuts every single day of your trip at Krispy Kreme or 7-Eleven. If you're not in the know, Homer Simpson's love of doughnuts is pretty legendary, with the website Simpsons Wikia noting that Homer even sold his soul for his favorite pastry during one episode. Because, mmm, doughnuts.

What's more, Vix reported that The Simpsons creator Matt Groening named the character after his father, who also had an insatiable hankering for doughnuts, though he didn't elaborate on whether or not his dad's favorite doughnut color is pink. For Homer, there's no such thing as too many pink-frosted doughnuts. "In the 1993 "Treehouse of Horror" episode, devil Ned Flanders sends Homer to hell for eating a doughnut, and his punishment there is to be eternally force-fed more of them," Gael Fashingbauer Cooper wrote for Cnet.

"The twist, of course — this is like throwing Br'er Rabbit in the brier patch. Steel-stomached Homer finds this hell to be a true heaven." If your FOMO is out of control, you can get "The Simpsons Donut" limited-edition soundtrack from the 2007 movie that is not only shaped like a doughnut, but it smells like one too. Listen to it while whipping up your own millennial pink Homer Simpson inspired doughnuts from an online recipe. Hey, just because you don't live in Australia doesn't mean you should miss out on Homer's fave snack.

People love doughnuts so much that Fact Retriever reported that more than 10 billion doughnuts are made in the U.S. each year. Even more bananas is the fact that old Hollywood created an exclusive club dedicated to their favorite frosted pastry. "During the 1940s, stars such as Johnny Carson, Pearl Buck, Red Skelton, Jimmy Durante, and Martha Graham were members of the National Dunking Association for doughnuts. The association even provided membership cards."

OK, someone needs to bring this club back ASAP. What's more, before handing out candy on Halloween was a thing, people bobbed for doughnuts on a string, which actually sounds a lot more fun that going door to door begging for free treats like some kind of sugar fiend. Fact Retriever also noted that one man set a record for eating the most doughnuts when he smashed 29 of them in under six minutes in 1989. If Homer Simpson were a real dude, there's no question he could easily beat that time.

The fact that Homer gravitates exclusively toward millennial-pink doughnuts might have something to do with the color being associated with inducing feelings of calm. Basically, eating pink doughnuts is Homer's version of meditation. When asked about their love of the color pink, one respondent on Very Well Mind said: "[Pink is] a familiar friendly place deep within everyone's heart where there are no worries, you are never lonely, you have everything in life that you ever wanted. You are loved and accepted by everyone. You feel as if you'll never get old." That pretty much says it all. Pink plus doughnuts equals love. Maybe if we pester them enough Krispy Kreme will bring their pink doughnuts to the U.S. for National Doughnut Day in June. Hey, it never hurts to ask.