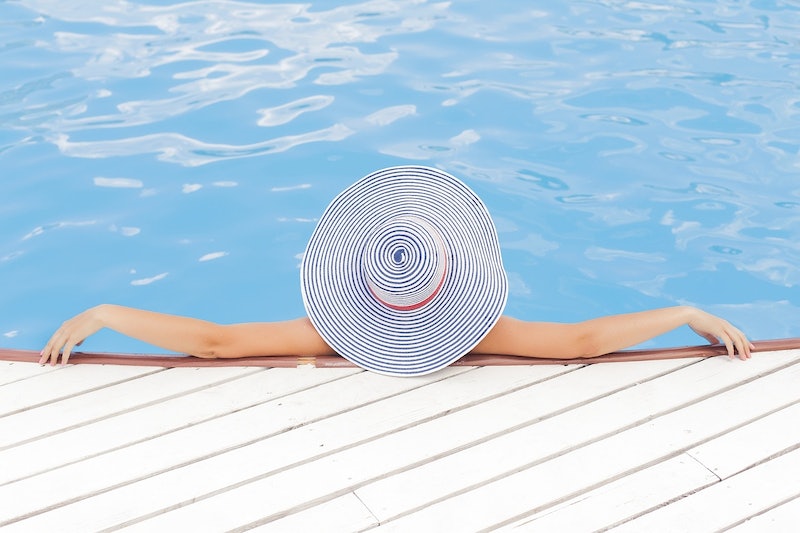 As a millennial, you take a lot of heat for doing crazy things like enjoying life, and taking care of yourself. You can officially stop feeling bad about this because the concept of self care is not new, and millennials are taking better care of themselves than any other generation. You've likely heard the the phrase "secure your own oxygen mask before helping others." This is the idea behind self care, which has been around since ancient Greece. The concept is simple: You're no good to anyone else if you aren't first good to yourself.

I'm not sure why this notion of taking care of yourself is being seen as novel, and, more importantly, unfavorable when caring for yourself is not something to be ashamed of. It's actually a sign of emotional intelligence — the ability to identify and manage your own emotions and the emotions of others.

According to Psychology Today, emotional intelligence generally includes these skills: Emotional awareness, the ability to harness emotions and apply them to tasks like thinking; and problem solving, the ability to manage emotions, which includes regulating your own emotions, and cheering up or calming down other people."

Imagine trying to do this for others if you haven't first applied the skills to yourself. Millennials seem to intuitively understand that one cannot exist without the other.

Self Care Is Making Millennials Happier

NPR reported that "more millennials reported making personal improvement commitments than any generation before them. They spend twice as much as boomers on self-care essentials such as workout regimens, diet plans, life coaching, therapy, and apps to improve their personal well-being."

And while some people, like millionaire and mogul Tim Gurner, mock you for spending your money on things you want (like avocado toast) instead of things society tells you you're supposed to want (like a white picket fence), you're not buying into the hype. And, this is a good thing.

If you're to follow the Baby Boomer generation's guide to happiness then you should pinch your pennies and save for a home. You should work 40-plus hours a week in the same job for your entire career. You should have kids, take one vacation a year, and stop complaining that there is no time or money left over to take care of yourself. But, guess what? The Pew Research Center reported that Baby Boomers are the unhappiest generation. Clearly their recipe for success isn't even making them happy, and you do not have to follow it.

Personally, I really don't have any interest in owning a home. I don't want to be responsible for the maintenance and upkeep, and I want to have the freedom to travel, and to live wherever I want whenever I want. The first time I took two trips in one year my mom was aghast.

"No one takes two vacations in one year," she told me. "Who made that rule?" I'd asked as I packed my bags for Mardi Gras. Since she wasn't paying for the trips, and I had lived on my own for a few years by then, I was confused by her resistance to my adventures.

Research clearly shows that people who spend their money on experiences instead of things tend to be happier. And, I'd rather spend my time and money exploring the world instead of getting the latest home gadget or making sure my grass is the perfect shade of green. So, why are the generations so divided on the topic of self care? Some researchers say the internet may play a role.

"In a way ... having that affordable free access to information increases awareness to these areas we didn't know from schooling or families," Hyepin Im, the president and CEO of Korean Churches for Community Development and an expert on mental health and digital literacy, told NPR. "Once you're aware, these new tools and apps equip us ... to actually make that investment."

How Millennials Are Slaying At Self Care

For all of its faults, the internet has started a global conversation that was not possible in previous generations. This has led to a decrease in stigmas surrounding formerly taboo topics like mental health.

"Maybe in the past, you thought someone was crazy or lazy, but now we've learned more," Im told NPR. "It's a continuum. A lot of those things [like increased internet access] allow you to become more sensitive to others."

While the internet has played a role, yoga teacher, retreat leader, and self care mentor Gracy Obuchowicz said there is more to it than that.

"Our generation has seen enough," she told NPR. "People are really hungry for knowledge. It's a relatively new idea in our culture that we would be paying attention to how we feel and using that as a kind of intelligence. It's something that's really waking up in our culture and our generation."

This new awakening has led to younger generations becoming more aware of the importance of taking care of both their minds and their bodies. Millennials are focused on health and fitness, caring for their mental health, treating themselves to new experiences, and rejecting a one-size-fits-all approach to life.

While critics may all you a "snowflake" that's not necessarily an insult. Every person is unique, and therefore has individual physical, mental, and emotional needs. Let's stop pretending that's not true.

And, while it may seem like you're constantly being criticized for questioning the way things have always been done, asking questions is the first step to changing something that doesn't make sense. Life is fluid, and it's constantly evolving and changing. You have the freedom to chart your own course, and, if that includes Reiki treatments and spending two weeks exploring Asia, that's your prerogative.

And, you can still be grateful for the inroads previous generations made without adopting them as your own. "What our mothers did in comparison to our grandmothers was epic," Obuchowicz told NPR. "[But] this is our revolution."

The bottom line? Go take care of yourself, unapologetically — on purpose, with purpose.