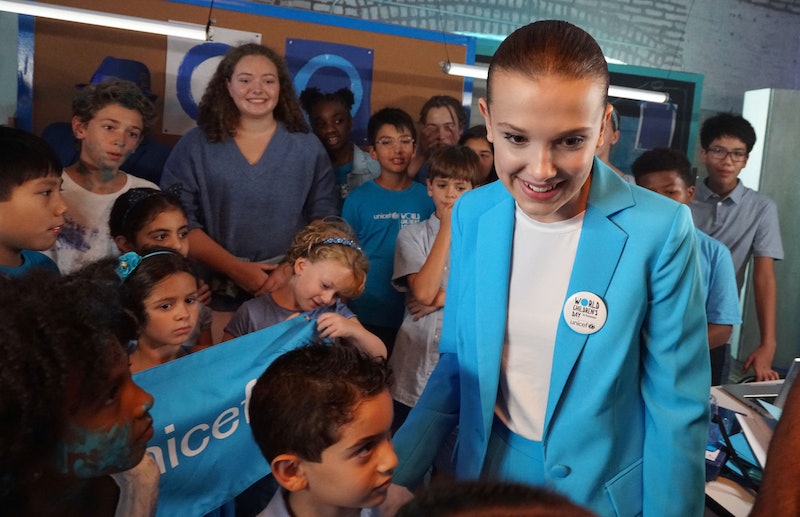 This really shouldn't come as a surprise, because she's so talented and inspiring, but Millie Bobby Brown was named UNICEF's youngest Goodwill Ambassador ever at just 14 years old. The Stranger Things star's honor was appropriately announced on Nov. 20, World Children's Day, which raises awareness for disadvantaged children who are unschooled, unprotected, and uprooted. The day is also described as a global call of action "for children, by children." Understandably, Brown couldn't be more honored or proud of her official UNICEF role.

"It’s a dream come true to become a UNICEF Goodwill Ambassador," Brown said in a statement. "It’s a huge honor to join such an impressive list of people who have supported UNICEF over the years. I am looking forward to meeting as many children and young people as I can, hearing their stories, and speaking out on their behalf."

As a Goodwill Ambassador for the United Nations International Children's Emergency Fund, Brown will help spread the word about children's rights and issues affecting young individuals, including "lack of education, safe places to play and learn, and the impact of violence, bullying, and poverty."

The Emmy-nominated actor is already taking her role seriously, as she filmed a short video for UNICEF promoting World Children's Day. In the clip, which you can watch below, Brown reaches out to fellow famous Goodwill Ambassadors (Liam Neeson, Lilly Singh, and Orlando Bloom) for help in "going blue" in support of the special day and children's rights. Singer Dua Lipa and the Blue Man Group also make appearances in the video.

Speaking of going blue, Brown even changed her name in her Instagram bio to "Millie Bobby Blue." This new role definitely means a lot to her.

Brown also shared a video on Instagram on Tuesday, where she revealed her thrilling news to all of her followers. "This is a role that has actually been one of my biggest dreams, and I'm so excited to tell you guys about it." She later said, "This is such an honor and I'm so excited to share this with you guys."

Accompanying the video, Brown also shared the following caption: "A dream come true! It’s a huge honour to become @UNICEF’s newest and youngest ever Goodwill Ambassador to help defend children’s rights across the world. I can’t wait to get started!"

This isn't the first time she's supported UNICEF. In 2016, the Netflix star co-hosted its 70th anniversary celebrations at the United Nations. She also advocated for World Children's Day in 2017.

Helping others and impacting the world has always been part of Brown's plan. As she told Dazed magazine in November 2016,

"At the end of the day, I just do my job, I love my art. But I genuinely want to change the world. I’m very generous and I really want people to see that I am — that’s really it."

Now that she's been named the youngest-ever Goodwill Ambassador for UNICEF, Brown's certainly taken the right steps to influence other young lives and to change the world for the better.