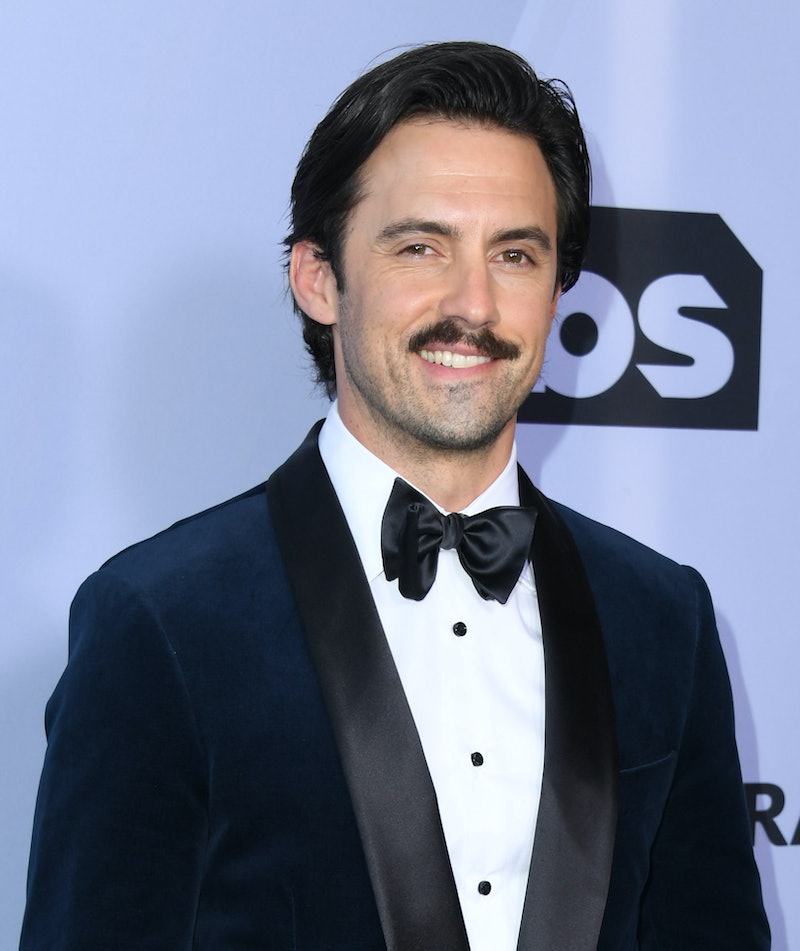 He may have yet to win an Emmy for his portrayal of Jack Pearson, aka one of the best male characters currently on television, but Milo Ventimiglia is the 2019 Hasty Pudding Man of the Year. Hey, at least he's being recognized with some kind of award, right? And, yes, Ventimiglia couldn't be happier to be honored by Harvard University's Hasty Pudding Theatricals for a celebrity roast on Feb. 8.

On Jan. 30, the This Is Us star tweeted, "More than excited to be roasted by the some of the smartest kids in America @HarvardMagazine. See ya there @TheHastyPudding MV."

Hasty Pudding first became a tradition in the late 18th century and honored its first Man of the Year in 1963. The oldest theatrical organization in the U.S. is overjoyed that Ventimiglia will soon be in Cambridge, Massachusetts. Grace Ramsey, the Hasty Pudding president, said in a statement about selecting the former Gilmore Girls actor, "We've loved his performances in This is Us, Heroes, and Gilmore Girls, but more importantly, he is the childhood crush of our two esteemed producers, Elizabeth [Mann] and Mariana [Sanchez-Medina]."

Plus, the 41-year-old talent has made "significant impressions on television and film," which put him at the top of the list for Hasty Pudding Man of the Year. There's no doubt he's impacted the small and big screen in amazing ways.

On Tuesday, Bryce Dallas Howard was named the 2019 Hasty Pudding Woman of the Year. She'll officially be recognized on Thursday, Jan. 31, with a celebratory roast, like Ventimiglia. According to The Harvard Gazette, this particular award for women, which was first established in 1951, is "bestowed annually on performers who have made lasting and impressive contributions to entertainment."

Howard was selected to receive the honor for her esteemed work in front of and behind the camera. She has a long line of well-known work including her most recent role in Jurassic World: Fallen Kingdom. She'll also soon be seen in the May 31 Elton John biopic, Rocketman.

“We are thrilled to honor Bryce Dallas Howard as our 68th Woman of the Year and for her to witness the groundbreaking first performance with our wonderful cast, featuring six talented Harvard women," co-producer Mann said in a statement.

Following their pudding pot awards, Ventimiglia and Howard will both have the chance to attend Hasty Pudding's production of France France Revolution, which is making major history this year. After 80 years of theatrical productions starring all-male casts, this will be the first time the show will include women in the onstage cast.

Who knows how they'll express excitement on Feb. 8 when Ventimiglia is on campus, but they'll probably just pass out tissues because he's very good at making people cry as Jack Pearson.

This is definitely an exciting time for both Ventimiglia and Howard. Here's hoping they share moments from the celebrations on social media, especially for those who can't attend the event in person.