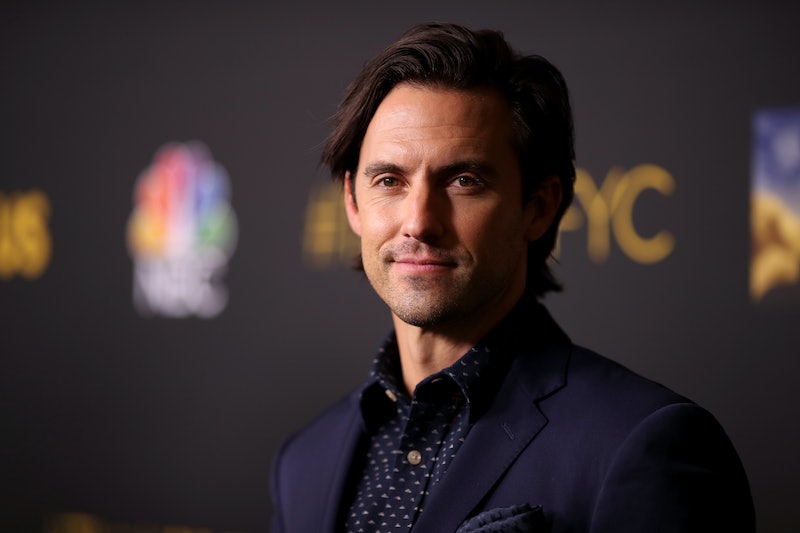 This Is Us may have a tendency to make its fans cry on a weekly basis, but that's only because its characters are so gosh darn lovable. And at the center of it all is Jack Pearson, who has easily put all other men to shame with his romantic gestures and sensitive nature. And while none of us have completely gotten over the tragic details surrounding his death, his real-life counterpart Milo Ventimiglia shared one fact about the This Is Us fire during a recent interview with Entertainment Weekly that makes it all the more impressive. It turns out, Milo Ventimiglia filmed his This Is Us death at the same time as Second Act, his new romantic comedy.

The actor is set to star as Jennifer Lopez's love interest in the upcoming romantic comedy titled Second Act, had a pretty jam-packed schedule during the latter part of filming This Is Us Season 2. In fact, Ventimiglia was hard pressed to find time to fly to New York from Los Angeles in order to film the movie. And while he was obviously able to make it work, shifting gears from the dark content on This Is Us to the light-hearted vibe of Second Act proved to be somewhat difficult for the actor. It was a challenge made even more taxing by the fact that Ventimiglia was filming Second Act at the same time as the Pearson family fire, which, as we now know, ultimately led to Jack's demise.

“I filmed [Second Act] the course of a month and I kind of went back and forth from L.A. to New York when I could between the show,” Ventimiglia explained to EW. “While I was burning down the Pearson house, I was also arm-in-arm with Jennifer.”

Talk about switching gears. It's weird, and more than a little impressive, to think that during the same time Ventimiglia was fighting flames and being an overall hero as Jack, he was also spending half his time cuddling up to J. Lo. (Does Rebecca know about this?!) But apparently, he was Lopez's number one choice to star as her leading man because of his role on the NBC drama. According to the actor, Lopez just loved his work on This Is Us.

“I got a phone call that said, ‘Hey, Jen’s doing this movie and she really wants you. And she doesn’t want anybody else. She wants you.’ So I was like, okay!” Ventimiglia recalled during the same EW interview. "She was the coolest, most hard-working, most naturally gifted partner out there. We enjoyed ourselves. It was really fun.”

Ventimiglia has already proven to have amazing chemistry with many of his female costars, including but not limited to Alexis Bledel on Gilmore Girls and Mandy Moore on This Is Us, so it's not surprising that Lopez had her eye on him right from the start. Having him as a love interest is basically like winning the lottery, let's be honest.

So the next time you decide to sit down and put yourself through unnecessary pain by rewatching that soul-crushing episode about Jack's death, just know that at least Ventimiglia was able to break up some of those tense moments by jetting off to NYC to hang out with J. Lo. It may just save you a few tears in the long run. (OK, probably not, but hey, you never know.)