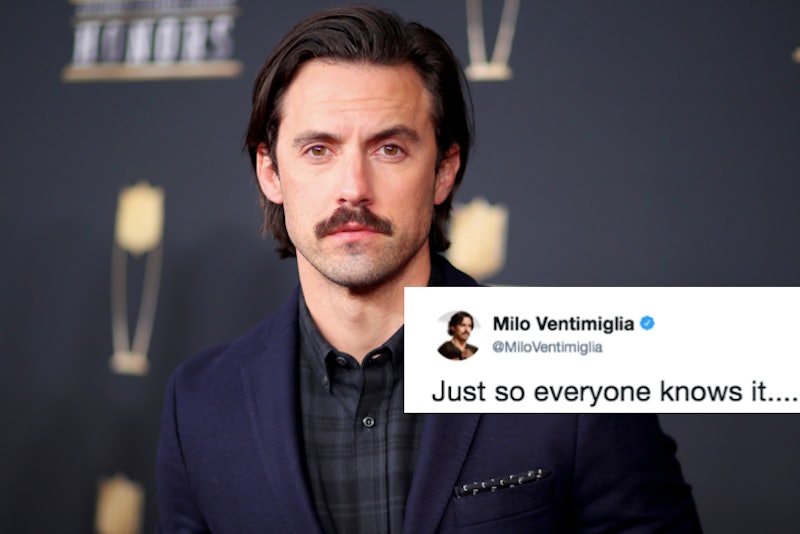 Major spoilers ahead for the Super Bowl episode of This Is Us (series writing: Kay Oyegun). It's the time. It's the day. It's all happening, finally. Jack's finally died on This Is Us. This isn't celebratory, mind you — it's just the culmination of everything that the show has worked to over the course of its one-and-a-half seasons. Jack is dead, and everything hurts. He died from "catastrophic" cardiac arrest after getting himself and his whole family (even the dog) out of a house fire. Remarkably calm, though, is Milo Ventimiglia, who plays Jack on the show. Milo Ventimiglia's reactions to Jack's death on This Is Us are just what Jack would have wanted. He's the guiding light for distraught fans right now.

Seeing Jack's death wasn't easy for fans. But, Ventimiglia knew that, hence his kind, gentle tweeting. Ventimiglia started his dad-like reassurance tour before Jack's death even aired. He wanted to manage expectations, I guess, or prepare everyone watching for the heartbreaking scenes that they were about to see. Of Jack's death, Ventimiglia told Entertainment Weekly, "It’s just an absolute soul-crushing event. Once you figure out the moment where it’s going to happen, you may get some hope — and then it’s all going to go away.” Don't sugarcoat it for us, Milo! He continued, “I think the best thing I can say — or the worst thing I can say — is: It’s going to be f*cking painful.” There's no need to surgically attach those handkerchiefs yet, though, because Jack isn't really going anywhere. Ventimiglia said:

“When [viewers] learn what happened to Jack, I think people are going to find themselves surprised with their own emotion. I really think people are going to have a hard time accepting it, but what they should know is that even when we do find out Jack’s death, it doesn’t mean that Jack goes away. That’s a good thing to remind people of — I’m not going away from the show, Jack is still around. There is still so much story to mine in this world of This Is Us.”

It's good that Jack won't be going anywhere, but damn, if it wasn't hard to watch the Pearson family patriarch perish after escaping a pile of flames. The night of the Super Bowl episode, Ventimiglia retweeted this clip from NBC describing in one word the episode, and all of the words were right. Specifically, though, his was the best — f*ck:

Yeah, that's pretty much what most fans said when they saw how Jack died. One moment, he was fine, and Rebecca was getting a candy bar (which I will never be able to eat again, by the way), and then the next moment, the doctor was telling Rebecca that Jack had suffered a heart attack and was dead. She was gone for like three minutes! I'm clearly not over it, and nearly are the fans. Luckily, Ventimiglia stepped in after the episode to, ever in his dad-like grace, reassure This Is Us fans that it's going to be OK.

While we all have been told that Jack isn't leaving, that he's within the spirit of the whole show, hearing it on a night like tonight is important. It's almost as if Milo Ventimiglia is the patriarch of the entire This Is Us viewership, and we all need him to tell us that everything is going to be alright. While we're here, though, can I get a tuck-in and a glass of water before I go to bed? This Is Us has been emotionally exhausting as of late, and I'm thinking that This Is Us fans like myself need a little more TLC than usual.