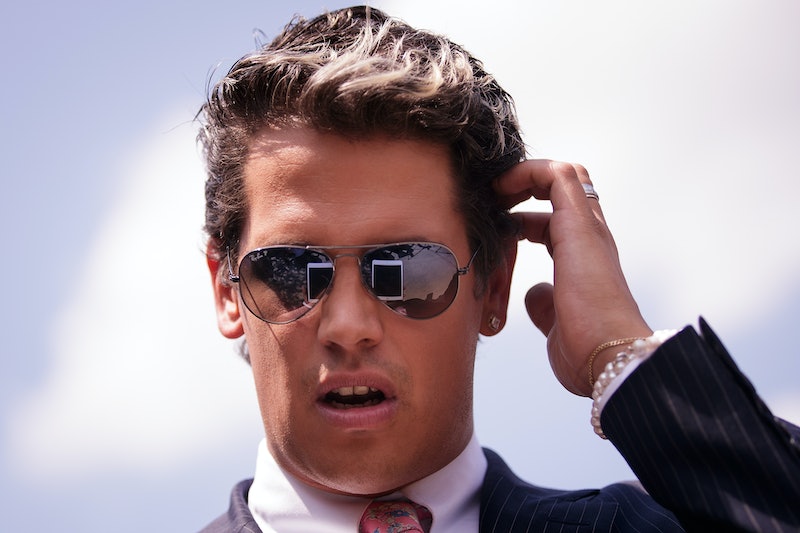 Milo Yiannopoulos, whose antagonistic hate-mongering (specifically targeted at actress Leslie Jones) got him permanently banned from Twitter earlier this year, has now landed a book deal with Threshold Books, an imprint of Simon & Schuster. Though no financial details have been released, sources with knowledge of the deal say his advance hovers around $250,000.

"They said banning me from Twitter would finish me off. Just as I predicted, the opposite has happened," said Yiannopoulos in a recent interview with The Hollywood Reporter. "Did it hurt Madonna being banned from MTV in the 1990s? Did all that negative press hurt Donald Trump's chances of winning the election?"

An idol of the so-called "alt-right" movement (though he considers himself a "sympathizer" rather than an outright member of the white nationalist group), Yiannopoulos began his rise to fame in 2011, when he founded tech blog The Kernel, in an attempt to "fix European technology journalism." In 2014, The Daily Dot acquired the The Kernel; later that year, Yiannopoulos became an outspoken voice throughout Gamergate, declaring that "feminist bullies are tearing the video game industry apart." In 2015, he became a tech editor at Breitbart News. You know, the far right media company that, up until very recently, was run by Steve Bannon, Trump's chief strategist and Senior Counsel?

Threshold Books, the imprint publishing Yiannopoulos' book, has cultivated an arsenal of conservative pundits - some of their new releases include work by Glenn Beck, Donald Trump, Rush Limbaugh, Dick Cheney and Bobby Jindal, as well as a biography of Chris Christie - so it's no surprise that they jumped at the chance to work with a self-described "cultural libertarian" and "free speech fundamentalist."

Though neither a timeline nor details regarding the subject matter have been released, there's no doubt Milo Yiannopoulos will be hanging around media spaces for a while longer. If we thought perhaps 2017 would bring about an end to digital bullying, I have a feeling we were very wrong. "I'm more powerful, more influential, and more fabulous than ever before and this book is the moment Milo goes mainstream. Social justice warriors should be scared - very scared."

More like this
Romance Authors Are Mobilizing For Reproductive Rights
By Natalia Perez-Gonzalez
The Most Anticipated Books Of October 2022
By K.W. Colyard
10 New Must-Read Books Out This Week
By K.W. Colyard
What Is A "Hot Girl Book" & Why Is Everyone Talking About Them?
By Samantha Leach
Get Even More From Bustle — Sign Up For The Newsletter