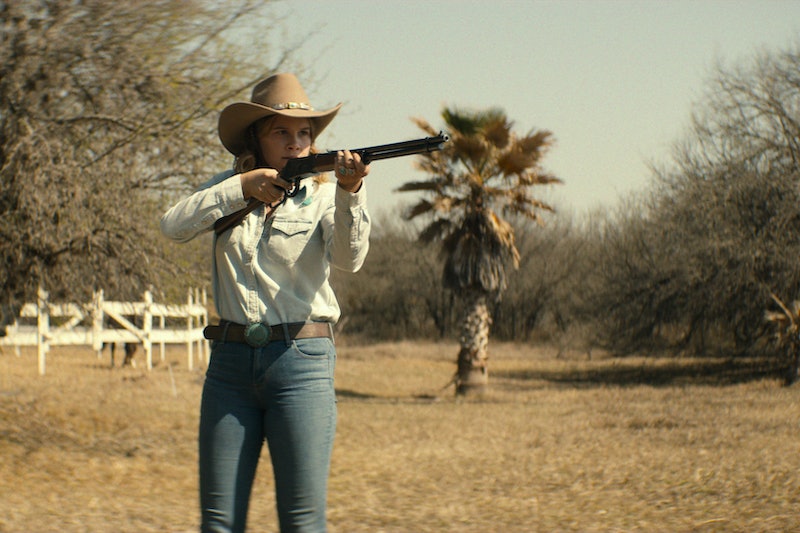 According to actor Sosie Bacon, Narcos: Mexico Season 2 is partly a love story. Bacon — yes, who is the daughter of Kevin Bacon and Kyra Sedgwick — plays Mimi Webb Miller, described in the New York Times as a "debutante from a prominent Texas family" and a niece of a former U.S. senator. Sosie Bacon's Narcos: Mexico character Mimi is indeed an actual person, and back in the 1980s, Mimi Webb Miller dated one of Mexico's most notorious drug lords, Juárez Cartel's Pablo Acosta (played by Gerardo Taracena in the show).

"To me I think it's just a beautifully written love story between these two people from completely different worlds," Bacon explained to AfterBuzz TV at the Narcos: Mexico Season 2 premiere. "Mimi's goal is to keep her boyfriend around because she's so in love, so she starts to meddle in some things and get other people involved, and it causes friction."

Undeniably the show will add some flourishes to their relationship, but Miller's love story with Acosta really did happen. The real life Miller now lives in Venice, California where she works as a casting director for commercials. Occasionally though, she leads horseback tours from Presidio, Texas to Ojinaga, Mexico, which is what she did decades ago back when she first met and fell in love with Acosta, according to a 2014 New York Times profile by Rachel Monroe.

Miller moved to the Big Bend area of Texas in the 1970s, and she eventually bought a ranch in a remote area of Mexico with a man she had a common law marriage with at the time. Miller was a popular guide for American tourists, since she knew the land and understood firsthand the effects that the illegal drug trade was having on the area.

In the 1980s, one of Miller's neighbors became Pablo Acosta, who by that time was controlling the drug smuggling trade along the border where Miller lived. Though Miller was aware Acosta was linked to the drug trade and several murders, Miller told Monroe that she found Acosta "kind and conscientious," and the two eventually became friends, with Acosta even giving her horseback tours permission to freely cross the border.

Eventually, Miller's relationship with her husband fell apart, and she started dating Acosta. “He was kind of like Kissinger,” Miller explained to Monroe. “Not the handsomest man I’d ever met, but a strong guy, with a lot of charisma.”

She was actually still dating Acosta when he was killed in a helicopter shootout with Mexican federal police in 1987. After his death, Miller fled to California.

It's not yet clear how much of a role Bacon's Mimi will have to play in Narcos: Mexico, but one of the Season 2 trailers shows a brief glimpse of Mimi sitting at the table with all the other drug lords, a gun in her hand pointed at everyone else under the table. With Season 2's trailers seeming to promise a rise of women into power, fans will have to tune in to see just how much Narcos: Mexico decides to interpret Mimi Webb Miller's character, and how much it will be a case of fact versus fiction.

More like this
Where Is The Bling Ring’s Rachel Lee Now?
By Arya Roshanian
Lori Vallow’s Son Was Arrested For Sexual Assault Days Before 'Sins Of Our Mother' Premiered
By Brad Witter
Lori Vallow Faces The Death Penalty For Allegedly Murdering 2 Of Her Children
By Brad Witter
Mike Flanagan Teases 'The Midnight Club' In This Exclusive, Creepy Clip
By Grace Wehniainen
Get Even More From Bustle — Sign Up For The Newsletter