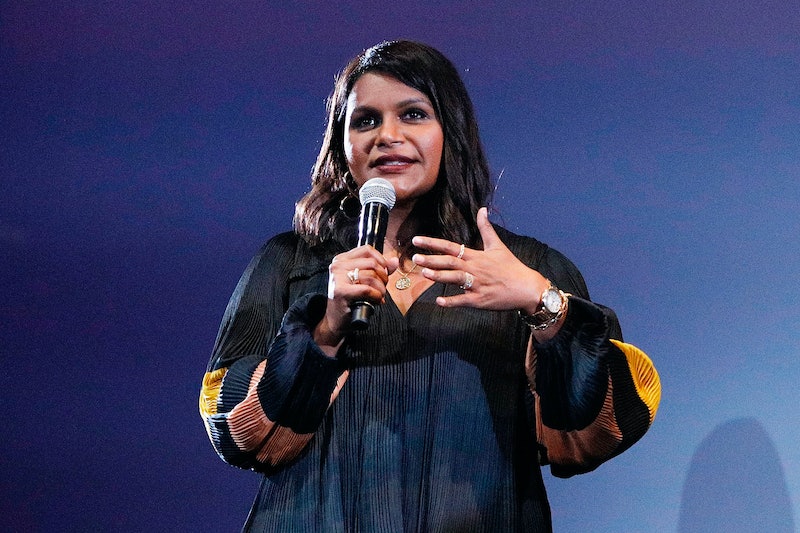 She was golden from head to toe. Mindy Kaling went platinum blonde at the 2019 Met Gala and the actor's flowing and mermaid-like locks matched her golden Moschino dress. Kaling served up quite a stunning and expertly coordinated monochromatic lewk, since her accessories and all of the accompanying details were golden, as well.

Kaling was totally self-referential with her bleach blonde look for the event, the theme of which was "Camp: Notes on Fashion." Back on April Fool's Day, Kaling posted an Instagram photo showing off white hot, platinum blonde strands. She joked in the caption of the image that the haters would chalk it up to Photoshop. It turned out that she didn't really go golden, but she still looked terrific with lightened locks. Perhaps that's the reason that Kaling decided to bring back the shade to complete her absolutely gorgeous Met Gala look. She kills it as a blonde — and she knows it.

Kaling wore her strands, which fell to her hips in soft, loose waves, in a deep side part. Her locks sat on one shoulder, while a major bow was perched on the other. The color absolutely popped against her skin and mauve lips.

However, since Kaling was rocking her signature brown hair hue as recently as yesterday on her personal Instagram, it's very likely that the Met Gala 'do was the work of a wig.

Update: Celebrity stylist Marc Mena confirmed that Kaling was rocking a wig. "This year’s look was centered around the hair," Mena said in press materials received by Bustle. "She really considered the theme and wanted to take it to the next level with a stunning platinum wig that made all of our goddess dreams come true."

As for Kaling's dress, the material mimicked liquid gold. But matching her molten and metallic gown to her strands wasn't the only dramatic move that defined her Met Gala 2019 presentation.

Check out those golden nails and the statement earrings that dusted her shoulders. Kaling's manicure and jewelry were incredibly matchy matchy but they never drifted into overkill territory. As if! Rather, her look was totally camp and fell fully in line with the theme of the evening.

Kaling also wore a statement gold ring. You'll notice that her heels were gold, too. Basically, she was 24 karats from beginning to end and it worked so well for her.

Kaling strutted her stuff on the pink carpet, giving off the palpable vibe that she loved both her coif and her gown. This is the second time she has "gone blonde" this year so she has been flirting with a major follicle change. She totally pulls it off and maybe she will actually make the commitment and go blonde for real in the future.

Here's a throwback to Kaling's epic look at the 2018 Met Gala. She opted for contrast, pairing her wedding dress-like white gown with blue, over-the-elbow gloves and a crown. Clearly, Kaling is all about accessories when creating her Met Gala looks.

Kaling was all about textured fabric with her 2017 Met Gala gown. The sapphire blue dress mixed sequins with fringe. The contrast between the two halves of the gown was wonderful and the off-the-shoulder style was so, so pretty.

Mindy Kaling was going for the gold at the Met Gala — and we won't be able to stop admiring her luminous look for a while.