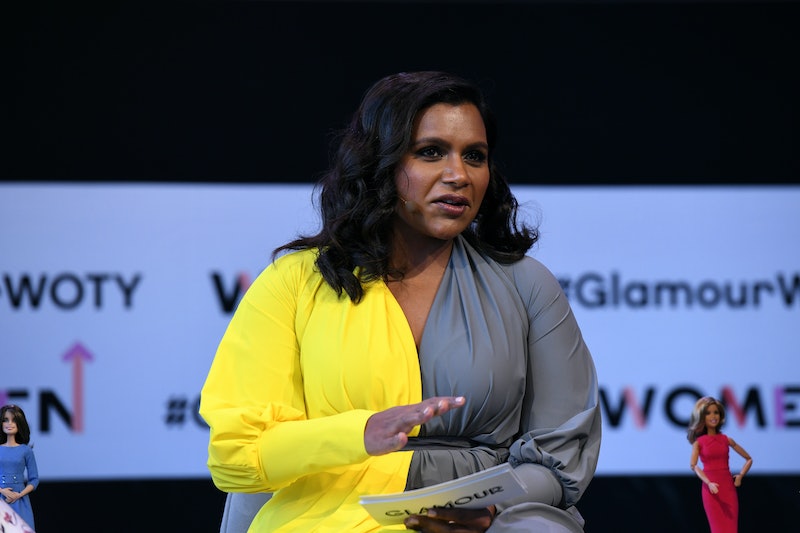 If you have a new baby and know nothing about baby books, A Wrinkle in Time star Mindy Kaling has you covered. In a recent Instagram story, Mindy Kaling shared reading advice for new moms, and handed out oodles of book recommendations for parents struggling to find something good — read: not mind-numbingly boring — to read to their kids.

Back in Dec. 2017, the then-38-year-old Mindy Kaling welcomed her first child, Katherine Swati Kaling, into the world. In her Instagram story, posted Monday, Kaling said: "Every day I try to read my daughter Katherine three to five books, and what's great are board books, because three to five books of regular books would be interminable, but they're like really short and really fun."

In her Instagram post announcing the story, Kaling posed with a number of board books, including Brown Bear, Brown Bear, What Do You See? by Eric Carle, The Going-to-Bed Book by Sandra Boynton, and There's a Wocket in My Pocket by Dr. Seuss. In addition to being short and sweet, board books hold another draw for Kaling. From the Instagram story: "Board books... get covered with spit. This entire book is 90 percent my daughter's saliva, and so that's kind of, I think, why they are board books, so that they can chew on them, because she's teething."

Parents concerned about their babies' propensity to gnaw on board books may be interested in Workman Publishing's Indestructibles: a line of Tyvek books that are touted as being "Rip Proof. Chew Proof. 100% Washable."

In addition to the books mentioned above, Kaling repped a few more titles in her Instagram story. Noting that her daughter loved Sandra Boynton's Moo, Baa, La La La!, Kaling said: "I think she really likes the illustrations, which are incredibly friendly, and even though they are simple, they have so much emotion." Kaling also listed Karen Katz's lift-the-flap book Peek-a-Baby as one of Katherine's favorites.

Another of Mindy Kaling's favorite books to read to her daughter.

According to Romper, Katherine Kaling has a very special book angel in her life. Mom Mindy's Wrinkle in Time co-star, Oprah Winfrey, gave the Kalings 100 essential children's books, delivered "with a hand-carved bookcase" in a U-Haul. I, personally, would be catatonic if Oprah decided to give my child any present at all, but Kaling managed to play it off as NBD, telling People: "I held my baby up to it and I said, 'Did you see what Miss Winfrey did for you?'"

Mindy Kaling's next project is Late Night, an independent film that she wrote, produced, and starred in, opposite Emma Thompson, about a late-night talk show host who hires her first female staff writer. Directed by Transparent director/producer Nisha Ganatra, Mindy Kaling's new movie will premiere at this year's Sundance Film Festival.