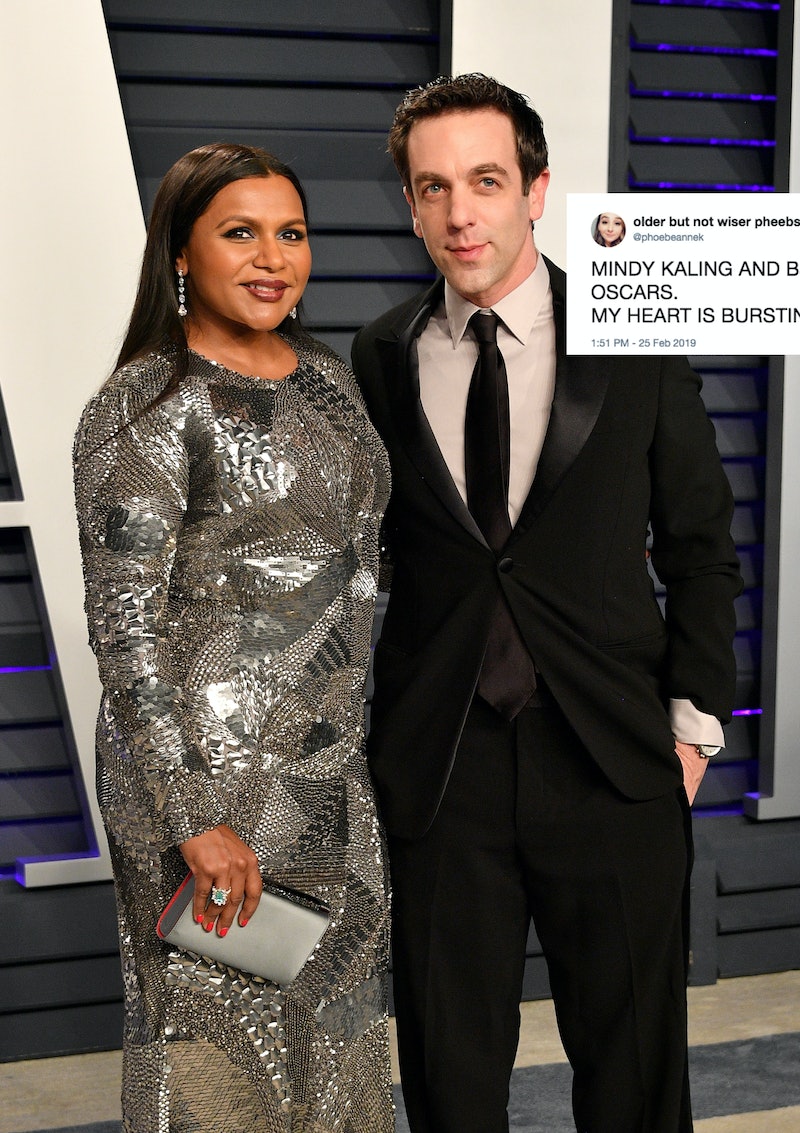 There have been plenty of The Office reunions over the years, but this one was just as exciting for fans. On Sunday, Mindy Kaling took B.J. Novak to an Oscars afterparty, and the night out showed their friendship is still going strong. The former costars attended theVanity Fair viewing party together for the second year in a row, according to People. It appeared that the former couple and longtime pals were having plenty of fun, posting video and photo updates on social media from the glamorous event.

On the way to the event, Kaling posted a video with Novak on Instagram, where the two can be seen joking around. "Happy Oscars everyone! I’m in the car on the way to one of several parties tonight with my good friend,” she said, panning over to show Novak. "I thought this was Grammy's stuff," Novak replied. "It's not the Grammys, why would we be going to the Grammys?" Kaling asked, to which Novak responded, "I don’t know, why am I going to the Oscars?”

Despite the jokes, the two did end up at the correct event and continued to share funny videos as the evening went on.

At the party, Kaling shared yet another video, this time seated at a table with Novak. "We're broadcasting live from the Vanity Fair viewing party dinner," she said. "I just want to say that nobody else at this party is on their phone," Novak said. "We're taking a big risk for your fans."

The Oceans 8 star went on to note that she ordered a chicken burger and fries for dinner, while Novak ordered broccoli but ended up eating most of her meal. The post was captioned, "The night is going so well #Oscars" with an eye-roll emoji.

The videos weren't the only update the two stars shared on Instagram. Kaling also posted a photo posing with Novak, writing in the caption: "We like a party #Oscars." Novak shared a set of photobooth pictures in which both actors can be seen laughing and making silly faces.

In the past, Kaling and Novak dated while working on The Office — she played Kelly Kapoor and he played Ryan Howard, and their characters had an on-again/off-again relationship on-screen as well. This latest night out had fans wondering if they were once again dating. One fan was loving the two being together again, tweeting, "MINDY KALING AND BJ NOVAK AT THE OSCARS. MY HEART IS BURSTING." Another user was convinced the two were together, writing, "The Oscars means Mindy and BJ are together" with heart emojis.

Of course, odds are these two are still just BFFS. In 2015, Kaling addressed their unusually close friendship in an interview with InStyle. "I will freely admit: My relationship with B.J. Novak is weird as hell. He is not my boyfriend, but he is not my best friend," Kaling told the publication. "I guess you could describe our relationship as a 'romantically charged camaraderie with loud arguments,' but I don't think Facebook would accept this as a new status."

It's unlikely these two are anything more than best pals, but fans who have been following their relationship since The Office clearly still want Kelly and Ryan to get together. Kaling and Novak seem to be making Oscar parties a tradition, so at the very least, fans can at least look forward to more funny award show videos in the future. However, Novak should do the right thing and skip the broccoli next year.