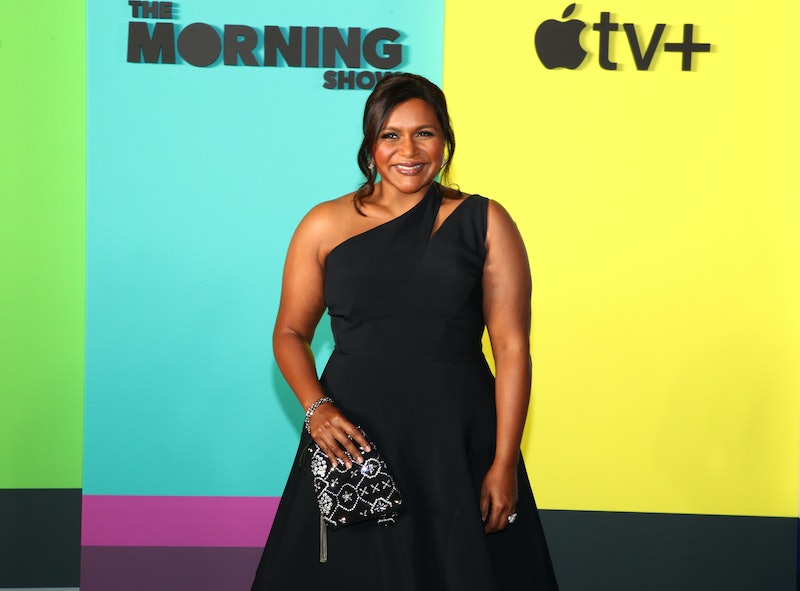 Spoilers ahead for Episodes 1-3 of The Morning Show Season 1. Viewers are first introduced to Mindy Kaling's The Morning Show character, Audra, in Episode 2, when she attends Alex Levy's (Jennifer Aniston) Leadership in Journalism award ceremony. She works for a morning show at YDA, while Alex is an anchor at UBA, making them professional rivals. They seem to keep things cordial in person, but it's clear there's bad blood between the two women.

"Even though our shows are ratings rivals, I mean, when it comes to supporting women in this business, we are all in the same boat," Audra says while speaking to a reporter at the gala, feigning sincerity. Then, she goes for the jugular. "What happened to her was humiliating. I could never show up at an event like this. I mean, to work with a sexual predator? Augh, I don't know what I would do. Thank god that's not me."

On this particular night, Alex is under a great deal of stress, and has no time for industry niceties. When the two anchors later bump into each other in the bathroom, she doesn't bother putting up a facade. "Why, Audra? I didn't f*ck anyone!" she dryly retorts when Audra says how sorry she is about Mitch Kessler (Steve Carrell), Alex's co-anchor who's just been fired after a sexual misconduct investigation.

The show doesn't explain the women's history, or how they arrived at such a hostile point in their relationship, but based on Alex's interactions with Bradley, it seems to be largely because they work in an industry insistent on pitting women against each other. Alex has fought hard to get to where she is now and sees any potential disruption to that as a threat. It's not unjustified: the network execs have been secretly plotting to replace her, and Cory (Billy Crudup) takes an interest in Bradley specifically because she'll get under Alex's skin.

"Alex has existed in a system that barely made space for her, and she felt lucky to be the only woman in that space," Reese Witherspoon, who plays Bradley, said at a recent press conference, per Parade. "My character comes in and says, 'Hold on! Just one woman isn't enough. There needs to be more.'"

However, it's one thing to know that and another to live it. During their first on-camera interview, Alex and Bradley trade compliments that double as subtle insults — mirroring the tense, fake-nice dynamic Alex seems to have with Audra.

After Alex announces Bradley as her new co-anchor, though, the two do start to soften to each other. Alex even holds Bradley's hand before their first day on air together — which seems out of character, to say the least. She is, of course, still wary of her new coworker's motivations, but the seeds of a potential friendship — or at least professional partnership — are there. Perhaps one day, the same will be able to be said of Audra.