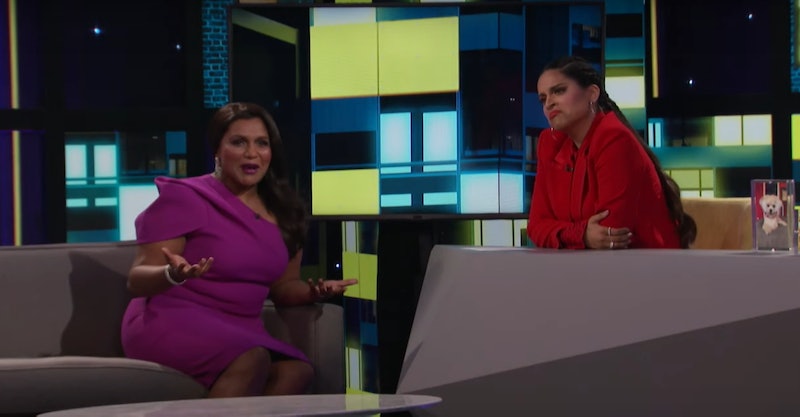 A Little Late With Lilly Singh/YouTube

It's not uncommon for celebrities to want to shield their children from the spotlight. In this particular case, though, one star was forced to conceal her child's identity by law. Well, kind of. OK, not really, but it still makes for a pretty good story. During a recent appearance on A Little Late With Lilly Singh, Mindy Kaling explained why she hides her daughter's face in photos. The star joked that it all boiled down to a very specific, legally related reason that would be totally terrifying if it were actually true.

On Sept. 13, Kaling sat down to chat with Singh for the very first episode of A Little Late. At one point in their conversation, the topic turned to Kaling's 18-month-old daughter, Kit, who only appears in pics with her mom while her back is facing the camera.

"You're a busy person," Singh told Kaling. "You're conquering the world of entertainment, you also are a new mom, OK, to 2-year-old Kit, who is adorable ... We actually have some pictures," the host revealed, after which a photo of Kaling and her daughter in matching pajamas appeared on the screen.

"Look how adorable Kit's face is," Singh joked, as the shot only showed the toddler from behind. She then flashed another pic of the star and child, and yet again, you could only see Kit from behind. "Those eyes," Singh said while Kaling laughed. "Are they hazel? Are those hazel eyes?"

After Singh showed a third and final photo of Kaling and Kit — and no, you couldn't see Kit's face in that one either — the actor finally fessed up about why she's so concerned with privacy. "She's in the witness protection program," she kidded. "She witnessed a crime, and she can't show her face."

Now, obviously, Kaling wasn't for real about Kit being in the witness protection program. She has been adamant about concealing her daughter's face from day one, though, and revealed the *actual* reason for doing that while speaking with Glamour earlier this summer.

Back in June, Kaling explained,

"I’m on social media and like sharing with people what my interests are and how my day’s going and all of that, but I do feel entitled to have privacy about my daughter and my relationships. It’s really essential to my life that there be something not everybody knows about. That’s a boundary, but it’s a very small boundary. Everything else I really don’t have any issue sharing."

Yeah, that makes sense — way more sense than a toddler being in the witness protection program. Kit is the one thing in Kaling's life that she wants to keep for herself. Fair enough. Luckily for fans, though, the star has been willing to share the occasional pic of her and her daughter — always with Kit's face out of view, of course — and they're always incredibly adorable. Their matching pajama game is especially strong and truly a treat to see.

Maybe one day Kaling will show the world Kit's cute face. Maybe not, though, and that's OK too. More matching sleep set pics will definitely suffice.

More like this
Ashton Kutcher Wants Danny Masterson “To Be Found Innocent” In Rape Retrial
By Jake Viswanath
'Wednesday' Star Emma Myers Thinks A Wenclair Storyline Is “Possible” In Season 2
By Alyssa Lapid
'The Queen’s Gambit' Season 2 Tweet Wasn’t From Anya Taylor-Joy
By Mary Kate McGrath, Jack Irvin and Grace Wehniainen
Austin Butler Recalls Lisa Marie Presley Showing Him Elvis’ Bedroom
By Jake Viswanath
Get Even More From Bustle — Sign Up For The Newsletter
From hair trends to relationship advice, our daily newsletter has everything you need to sound like a person who’s on TikTok, even if you aren’t.