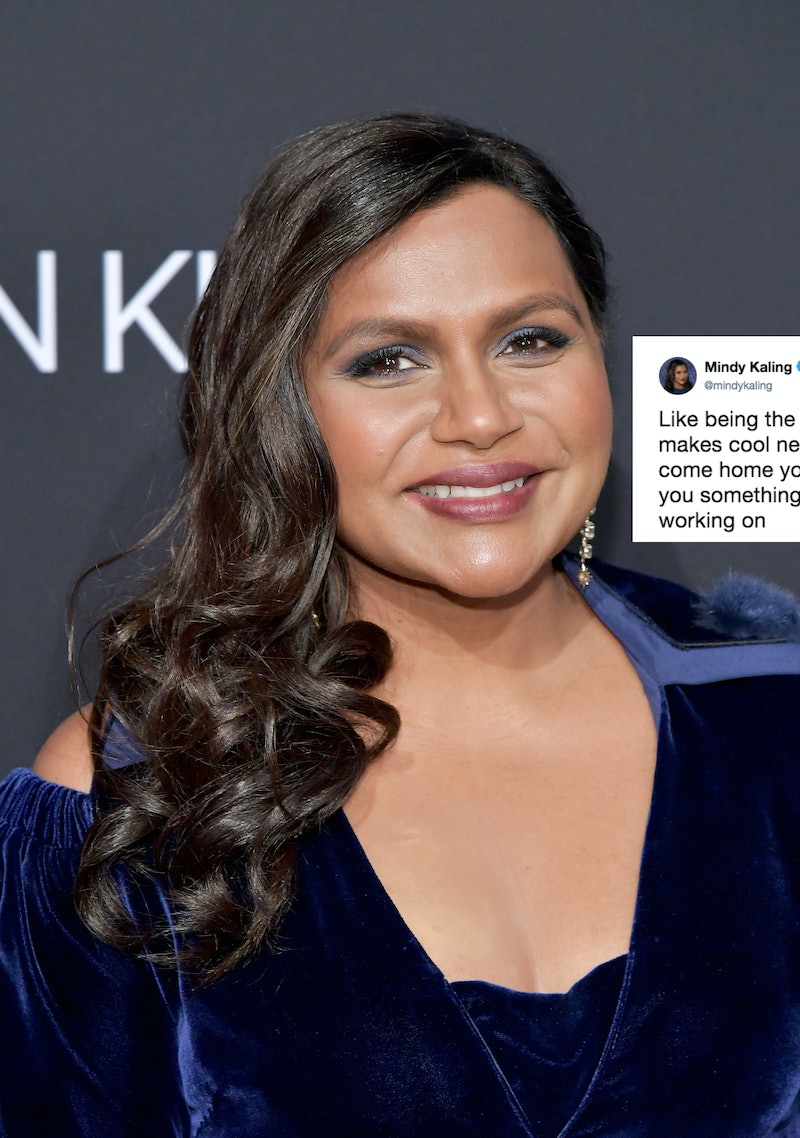 Since she became a mother for the first time last year, Mindy Kaling has dropped her gems of wisdom here and there. And now, her latest comment on what parenthood has been like so far is very sweet. On Monday, Kaling answered questions on Twitter during a spur of the moment Q&A session she held while she was dealing with some particularly rough jet lag, and one fan asked her about her experience raising daughter Katherine so far, she had the perfect analogy ready.

"What's it like to be a mother?" the question said, to which Kaling responded:

"Like being the head of a company that makes cool new tech and every time you come home your favorite employee shows you something really cool they’ve been working on."

Being that Katherine is still just under a year old, it's obvious that Kaling has probably seen her go through so many changes. Babies learn and grow so quickly, even with each passing day, so of course she has all kinds of new tricks. There are tons of milestones in that first year, like rolling over and sitting up for the first time, and some will even walk and talk before they turn one. Katherine has definitely been working on some pretty cool stuff, and Kaling sounds excited to get to see it all happen.

This wasn't her only tweet about parenting, either. When someone asked her how much parents should clean up after their messy children when they go out to eat, Kaling had an answer ready for that, too: "Great question. I say, as much as you can with all available napkins and then a huge tip!" she said.

Considering not all parents have this philosophy, good for Kaling on this one. Someone also asked her about what her plans were for her daughter's first birthday. "I’m in London for it! Would love some tips! Birthday party in Hyde park? It’s probably too cold but would love to take her to the Princess Diana fountain!" she said.

Katherine wasn't the only topic at hand, though. She also doled out advice for coping with heartbreak with a sentence that will resonate with anyone who's had to go through a painful breakup and lived to tell the tale: "Remember that the horribleness you feel now will one day make you roll your eyes. Good luck, friend."

So far, Kaling has kept many things about her personal life private, including her love life and anything that has to do with Katherine, but it's cool that she's willing to dispense a little intel and advice from her experience in both areas.

And on Halloween, she shared the first photo of her daughter... who was technically in a Halloween costume with her back to the camera, but still completely adorable.

From everything that Kaling has shared about her life as a mom so far, it sounds like she and Katherine are so lucky to have each other. Cross your fingers that more Q&As like this one are on the way — Kaling seems like someone who has a lot of wisdom to share, doesn't she?