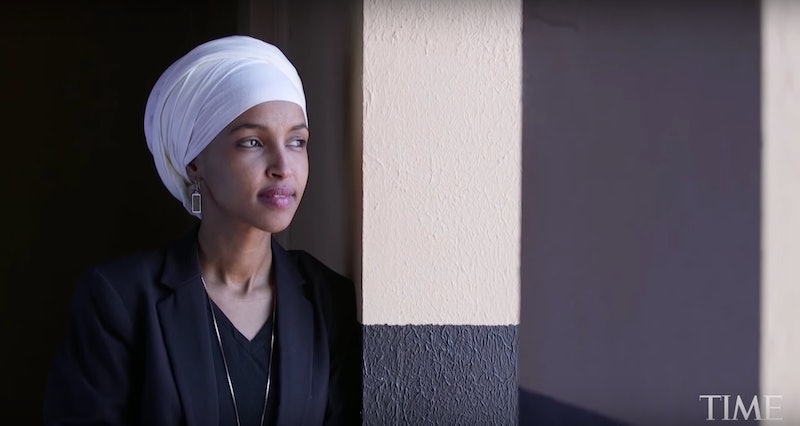 After clenching the Democratic victory for U.S. House District 5 with over 48 percent of the vote, Minnesota's Ilhan Omar is on track to become one of the first Muslim congresswomen in history. She could also become the first Somali-American in Congress, if she wins her state's midterm election. And as it turns out, that's a pretty likely outcome: Omar is running for a seat that's considered to be a safe Democratic seat, making her the favorite for November.

Of her history-making victory, Omar tweeted, "We started this campaign to prove people are ready and willing to fight for an America that works for all of us. To every staff member, volunteer, donor, and voter, this win is just as much yours as it is mine. Together, we will move our district, state and nation forward."

In Omar's primary victory announcement, her campaign manager, Joelle Stangler, said, “The positive response we received on the phone and at the doors was so inspiring. People want to see Ilhan in Congress because she is the bold.progressive voice we need. She has the hope and resolve to win the tough fights we face.”

Omar and Michigan Democraitic nominee Rashida Tlaib are both looking to become the first Muslim-American women to serve in Congress, pending the results in the general election. Omar will now be running against Republican nominee Jennifer Zielinski for the seat in Minnesota's 5th congressional district.

The potential midterm election of two congressional Muslim-American female nominees is a pretty big milestone. What's more, it might indicate a cultural response the general sense of unease that Muslim-Americans have felt since Trump took office, according to Eugene Scott of The Washington Post.

Muslim Americans, in particular, found themselves politicized like never before after a presidential campaign that produced what critics called some of the most anti-Muslim language in history. After years of peddling rumors about Barack Obama’s birthplace that seemed rooted in Islamophobia, Trump called for a 'total and complete shutdown of Muslims entering the United States until our country’s representatives can figure out what is going on' in December 2015, a few months after launching his White House bid.

Of course, it's not necessarily a direct correlation, but it doesn't seem accidental that this year has yielded a record number of people running for office from traditionally disenfranchised demographics, including women, people of color, and people of the LGBTQ community.

Omar's biography is far from being just another notch mark for a statistic, though. Per TIME, Omar fled Somalia at eight years old, living in a refugee camp in Kenya during her teenage years before immigrating to the United States. She reportedly learned English by watching television.

Of her bid for election, Omar said to the Twin Cities after registering to run, “I know what it feels like to be a young family looking for opportunity in the United States. I am excited to go and be a voice for the voiceless at the Capitol.”