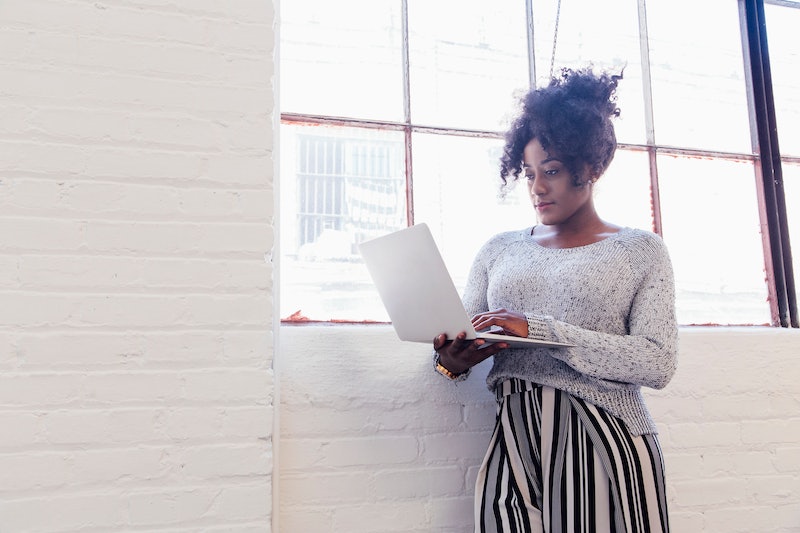 Men who spew violent anger toward women should be condemned in the same way as white supremacists, according to a new report from the Anti-Defamation League (ADL) linking misogyny and extremism. While this type of hatred can certainly manifest in real life, it's often fueled by the anonymity provided by the internet and social media — and there's a lot more tech companies could be doing to eradicate the hate speech.

"We want people to be really cognizant of the fact that social media can be an echo chamber, and if you’re expressing these really vile points of view and/or even advocating for violence against women — and that being retweeted, and commented upon, and distributed worldwide — there’s a real potential for 'real life violence,'" Jessica Reaves, the ADL report’s author, tells Bustle. "But there’s also the issue of creating a toxic environment online where women don’t feel safe communicating with each other [or] communicating their opinions."

Not only does the ADL's report assert that combatting misogyny should be taken just as seriously as fighting white supremacy, it also says "the two ideologies are powerfully intertwined," as "a deep-seated loathing of women acts as a connective tissue between many white supremacists."

And Heidi Beirich, director of the Southern Poverty Law Center's (SPLC) Intelligence Project, adds that many white supremacist leaders got their start during #GamerGate, a misogynistic harassment campaign that targeted women in the video game industry.

Most of the report's policy recommendations for battling misogynist hate involve the internet — from educating law enforcement about "the real dangers misogynist extremist groups pose to public safety," to ensuring social media platforms update their Terms of Service to strictly prohibit content that reflects extremist ideologies.

"The unfortunate downside of the internet revolution is that people can just get online, meet other people who share their heinous views, and put their bigotry and hatred out in the world without having to actually show who they are," Beirich says. "People would not walk around town saying the kinds of things they’re willing to say online through the shield of anonymity."

One man's misogynist comments online did turn into real life violence in April when a member of the "incel" movement (which stands for involuntary celibates) killed 10 people by driving a van onto a crowded Toronto sidewalk. Most of the victims were women. Incels "luxuriate in their hatred of women," according to the SPLC's website, typically finding other men who blame women for their celibacy online.

Although Reddit banned the /incel subreddit last year, incels and other misogynists still interact within that community from behind a computer screen. Reaves' report calls for tech platforms to explicitly take a stance against misogynist behavior in their Terms of Service — and to actually enforce those rules. However, simply removing hateful content isn't necessarily the answer, according to the ADL, as it may not get to the root of the problem or hold misogynists accountable.

For some tech companies, the answer may be placing hateful content in a kind of permanent lockdown to preserve timestamps, retweets, or other type of information that researchers and law enforcement could need to later analyze the activity. "Just suspending accounts can interfere with that type of work and be counterproductive," Brittan Heller, the ADL's director of technology and society, tells Bustle.

Just as users have called on social media platforms to suspend white supremacists' accounts, the ADL says there's room for improvement when it comes to adequately dealing with misogynist comments. The report describes misogyny as a "dangerous and underestimated component of extremism" — a component that targets half the population.