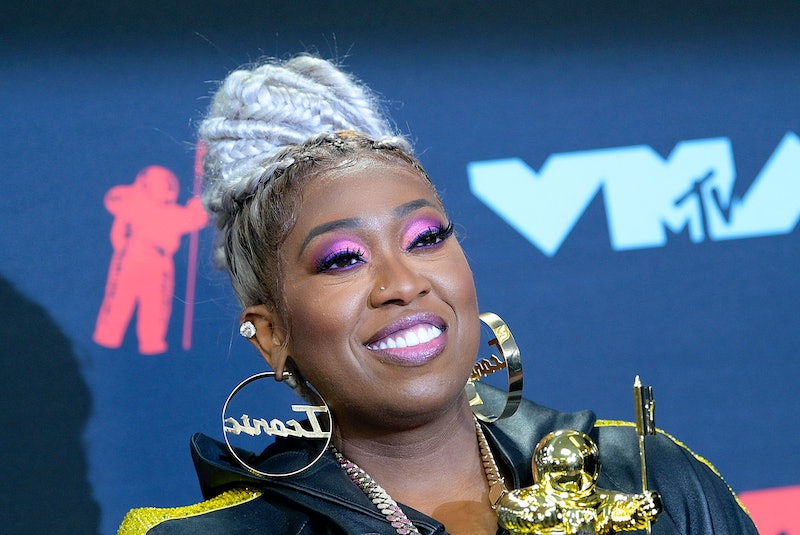 It's been a banner week for Missy Elliott. At the 2019 VMAs on Aug. 26, the rapper and icon received MTV's Video Vanguard Award in recognition of her significant contributions to art, fashion, and culture. But during the celebration, Missy Elliott lost a diamond necklace at the VMAs, which was held at the Prudential Center in Newark, N.J. The lost jewelry appears to be the one blight on an otherwise amazing week for the Supa Dupa star.

Elliot took to her personal Instagram story on Aug. 28 to let the world know that her necklace was MIA and that she was seeking fans, friends, and followers' help in securing its safe return. She posted a shot of the jewelry and shared additional details about its size, alongside the prayer emoji. Elliott also stated that she is offering a reward to whoever finds and returns the piece. She did not share the exact amount of the reward, nor did she reveal if the necklace fell off while she was performing or if it somehow got misplaced backstage. Whatever the case, the necklace obviously holds special meaning to the "Get Ur Freak On" singer since she is going to great lengths to get it back.

Bustle reached out to Elliott's reps for additional information about the lost necklace. As of press time, the rapper has not posted anything further on her socials to indicate that the bling has been located.

Jewelry has always been a massive part of Elliott's unique street style. She took accessorizing to a whole other level in the early and mid-'00s. During her heyday and through the present, Elliott often rocked huge gold earrings, layers of thick chains, epic pendants, and stacks of chunky rings with her signature sweatsuits and fashion forward sneakers. Both her statement jewelry and her apparel usually displayed some strong personal connection — like that time she wore a Cancer emblem that represented her astrological sign in 2013 or when she wore a jacket featuring an image of her good friend, the late singer Aaliyah, to the 2001 VMAs.

When Elliott took the stage at the VMAs on Monday to perform a medley of her hits, she brought back some of her most memorable looks from her beloved videos, like the glossy and puffy black suit from "Supa Dupa Fly."

Meanwhile, her Video Vanguard acceptance speech outfit was typically Missy, consisting of a customized black leather sweatsuit with gold and glittery lettering and trim. She added piles of jewelry, including an "Iconic" necklace and "Iconic" hoop earrings that were self-referential and a nod to her new Iconology EP. The ensemble was proof that no one did or does heavily accessorized athleisure better than Missy Elliott.

Fans and fellow artists have been enjoyed Elliot's fabulous and fashionable return to the spotlight. She had famously stepped away from the scene in the mid-'00s to deal with health issues but has slowly and steadily mounted her comeback. Here's to hoping that more music, more iconic looks, and generally more Missy Elliott is in our future.