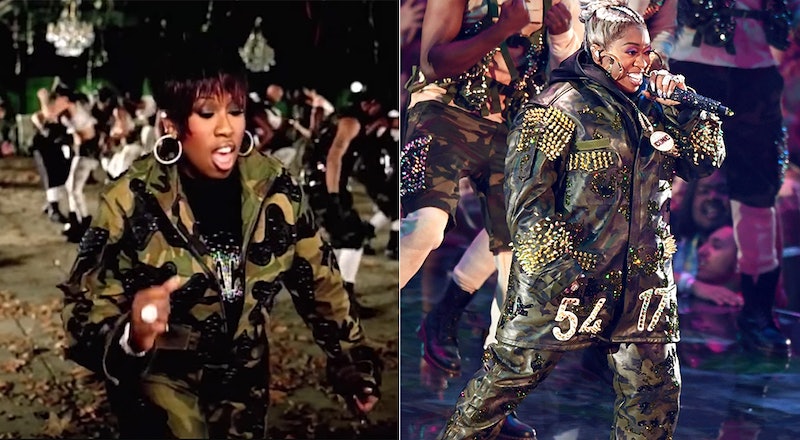 Considering Missy “Misdemeanor” Elliott is 2019’s Video Vanguard Award recipient (and the first female rapper to be honored for it) no one should be surprised that she came for everyone’s neck. On the stage, Elliott referenced a bunch of her most iconic videos in her outfits including "Get Your Freak On," "Work It," "Pass That Dutch," "Lose Control," and her new single from her latest album Iconology, "Throw It Back." The hip hop icon's 2019 versions of her music video outfits prove that she's keep up with today's trends, but it’s like her style never really changed.

Not only did Elliott’s outfits kill the VMA stage, but her hair, makeup, and accessories also came to slay. Wearing her hair in a braided updo in a grayish-white color and hoop earrings, the rapper turned out a sick look for her performance.

Missy Elliott has always been a trailblazer for putting together dynamic visuals for videos and the outfits to match. One of the entertainer's most iconic music video costumes was the large blow up suit she wore in the production for "The Rain (Supa Dupa Fly)" video.

Elliott "threw it back" during her performance and wore the iconic outfit for her Video Vanguard performance.

Elliott set the record straight on Twitter earlier this year that her original costume wasn't actually a garbage bag, despite what many fans presumed:

In 2017, for her Elle cover story, Elliott revealed exactly why she wore the whimsical outfit in the first place.

“To me, the outfit was a way to mask my shyness behind all the chaos of the look," Elliott said. "Although I am shy, I was never afraid to be a provocative woman. The outfit was a symbol of power ... I knew I could have on a blow-up suit and still have people talking. It was bold and different."

In addition to the iconic suit, Elliott also brought back the scarecrow look from "Pass That Dutch"...

No one can forget that Missy was also an important figure for plus size representation in fashion, streetwear, Hollywood, and hip hop overall. The video vanguard had been sporting a lot of tracksuits in her music videos including "Work It" and "Gossip Folks." And who could forget this velour Adidas track suit she wore to the Grammy's that millennials might still fangirl over nowadays.

Missy Elliott can pull through with the jaw-dropping, strange and unusual outfits any day of the week. It's her biggest supporters who will be copping the looks for themselves soon after while chanting "Beep Beep, who's got the keys to the Jeep?"