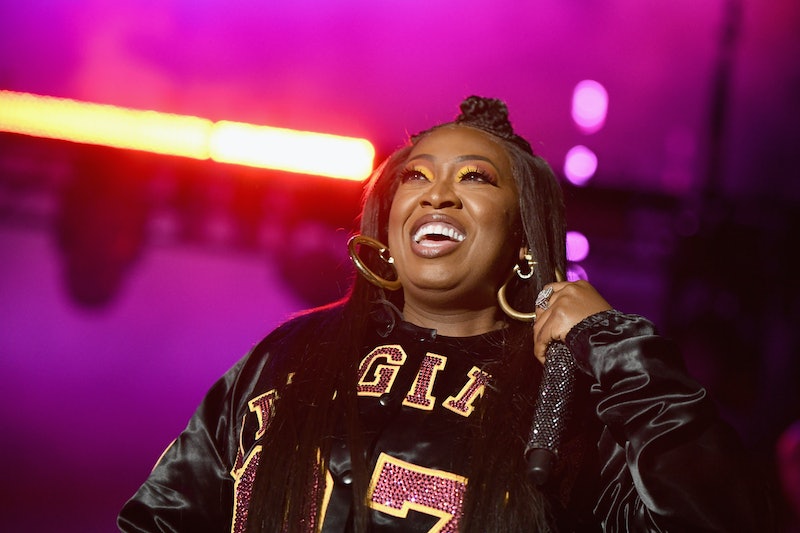 Missy Elliot hasn't had a new album in 14 years, but the 22-Grammy nominated artist just announced that she is dropping new music at midnight on Aug. 22. And she announced the news in the most iconic way. Missy Elliott's hair on the Iconology cover spells out "Missy," marking that the queen is back.

Elliott announced the news on Instagram and Twitter, just a half a day before the album was slated to drop. "At midnight tonight I’m dropping a collection of new songs! Let’s #ThrowItBack to a time when music just felt good and made us want to dance!" the artist announced on Twitter.

Elliott has been talking about her upcoming collection of songs for quite some time, and back in July she gave Marie Claire a closer glimpse at what fans could expect. According to Marie Claire, Elliot wants to make "street dudes dance again," like during the era of Soul Train. “It’s okay,” Elliott told the magazine. “It’s not corny.”

The Iconology cover puts Elliott in the spotlight, featuring the artist wearing a brocade black dress and large silver hoops. Her nails mimic the same silver color, and each finger has a stack of rings. Elliot's eyes are closed to reveal silver shadow, and her hair is set into braids that fall down into an impossibly long ponytail. But the ponytail doesn't lay flat down her back. Instead it spells out the word "Missy" in cursive.

Elliott elaborated more about the surprise music drop on her Instagram. Posting the same epic cover photo, Elliott wrote, "This year has been a tremendous year for me…I am humbled and grateful. THANK YOU for allowing me to smell the roses. You, my fans, and God are the reason I am here and have celebrated every milestone with me! So, I have a SURPRISE for you... let’s continue the celebration at midnight tonight…I’m dropping a collection of new songs!"

While Elliott's name-proclaiming hairstyle is impressive, one can suspect this won't be the only iconic look that Iconology will produce. On Aug. 13, Elliott shared another promo picture on Instagram, and her beauty style was just as epic.

Wearing her hair color in a navy ombre style, half her hairstyle was fashioned into curls that formed into a triangle. The other side of her hair was slicked back to create a contrast. To play up the blue hair color, Elliott wore bright purple lipstick.

Of course, Elliott is known as the master of avant garde hair and makeup. All you need to do is look back at the artist's 2017 single "I'm Better" for proof. In the opening scenes of the video, Elliott is rocking an asymmetrical black bowl cut that dramatically hides her eyes. In order to compliment the edgy look, Elliott's lips are done up in a matte black — but there is a reflective black cut-out in the middle to catch the light.

Her next look rocks the reverse, and Elliott is seen wearing a platinum wig with bright silver lipstick.

The icon is officially back, so get ready for a lot more avant garde and boundary pushing looks this year. The beauty community has been waiting for Elliott's epic return.