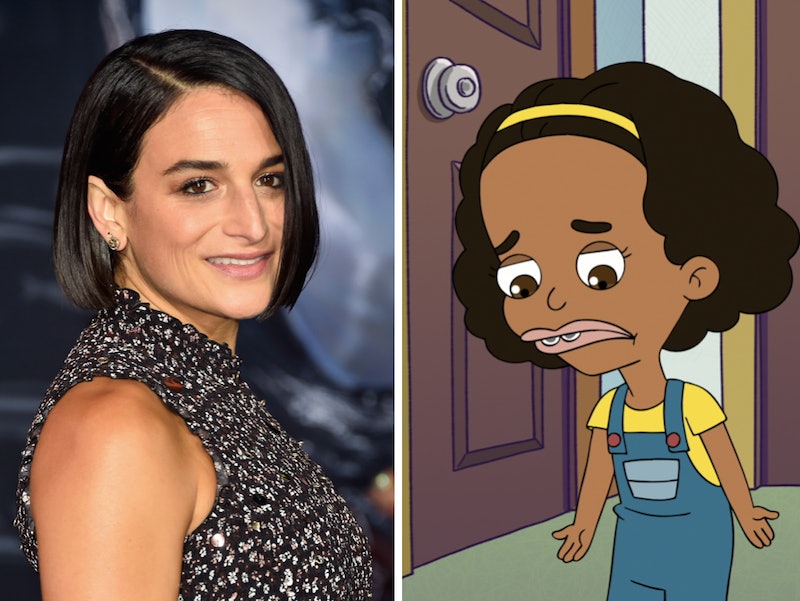 Spoilers for Big Mouth Season 2 ahead. Out of all of Big Mouth's endearing characters, of which there are a lot, there's one lovable weirdo who stands out. Missy (Jenny Slate) is Big Mouth Season 2's most optimistic character. She does things like join an online community called "Girls Are Perfect And There's Not A Thing Wrong With Any One Of Them And Anyone Who Would Tell You Otherwise Is Actually Just Afraid Of Your Power" and gush about her favorite actor, Nathan Fillion. That's why it's so heartbreaking when Missy becomes ashamed of her lack of curves once Gina Alvarez (Gina Rodriguez) gets boobs. She's always marched to the beat of her own drum, so it's both gutting and realistic that she, too, succumbs to body insecurity.

"I think for Missy, she starts [out] not knowing that there's anything that would ever be quote unquote 'wrong' with her body, and then feels it, and then deeply internalizes it," Slate tells Bustle. "She's a very confident... sweet-hearted young woman, and she still gets into that insecurity thing immediately. It eats her up right away, and on one hand, that's kind of a tragedy. On the other hand, it's totally normal. And I think that that will happen many times in her life because she stays vulnerable." In other words, Missy's malleability is something to be treasured. "I bet she would say something like, 'Vulnerability is a great strength,'" Slate says of her Big Mouth character.

Missy's conversations with Mirror Missy, who is far meaner than her counterpart and says things like, "News flash: nobody wants to see that bummer of a body!" prompt the poor, sweet middle schooler to throw on a baggy hoodie to hide her offending body parts.

This critical inner dialogue is one that many women are all too familiar with, and Slate is no exception. Not only was the comedian a late bloomer, but she recalls being bullied in school. "I think I relate to Missy because she's a lot more like me now," she says. "I'm confident like her now, but I wasn't when I was a kid. And I feel that, although I'm really grateful for my experiences as a kid, and I still love that little girl that lives inside of me, I don't need her to be the person who tells me the way that the world sees me anymore."

Thankfully, Missy's self-esteem storyline doesn't end there: Her mom takes her and Jessi (Jessi Klein) to a Korean spa, where they see naked women with a variety of physiques. "Your body is gorgeous, just like all the women in here," her mom assures her. And since Missy deeply internalizes things, she believes her mother and goes walking around the girls' locker room topless, much to Jessi's chagrin.

And while Missy eventually accepts her body as it is right now, her self-esteem issues will likely return, because anything else would be unrealistic. "The fact is that it won't be over," Slate says. "Because whether or not her experience is perfect or pain-free is not the goal. The goal is...to watch her as she navigates it. And not to watch her as she wins, but to watch her while she's in flux."

Another person who accepts her body unconditionally? Nathan Fillion. Missy has several daydreams about the Firefly actor again this season, and in them, he's more than happy with her flat chest. "Oh Missy, I love your bustle," he tells her in Episode 8. "It makes you look ravishingly intelligent."

"I love that she loves Nathan Fillion," Slate says. "And he has a new show out now, and sometimes I drive around, and I see his billboards, and I'm like," — here, the actor shifts into her high-pitched Missy voice — "Oh, Nathan Fillion."

And the actor had her own Nathan Fillion growing up, too. While her early crushes included Michael Dukakis and Red Sox player John Valentin, Leonardo DiCaprio soon took over Slate's life. "I had 27 pictures of him on my wall, and I was obsessed with him," Slate recalls. She even had her own version of Missy's Nathan Fillion daydreams, explaining that her family went on vacation to California, where she pictured herself running into the Titanic actor.

"And I had goggles at 16, and I didn't sunbathe — I swam and dove for rings [in the pool] because I was a dork," she says. "I had this daydream that I would be diving for a ring, and like, two feet would come down." When she came to the surface and took off her goggles, she imagined Leonardo DiCaprio would be standing poolside. "And you imagine him being like, 'Who are you? I've never met a girl from Massachusetts before,'" she laughs.

More like this
Chrishell Stause & G Flip Have “No Rules Or Regulations” In Their Relationship
By Brad Witter
Who Is 'Stranger Things 4' Fan-Favorite Joseph Quinn Dating IRL?
By Grace Wehniainen
Bachelor Nation's Blake Horstmann Is Dating 'Love Is Blind' Star Giannina Gibelli
By Jake Viswanath and Radhika Menon
Sadie Sink Would Escape Vecna From 'Stranger Things' With This Taylor Swift Song
By Grace Wehniainen
Get Even More From Bustle — Sign Up For The Newsletter