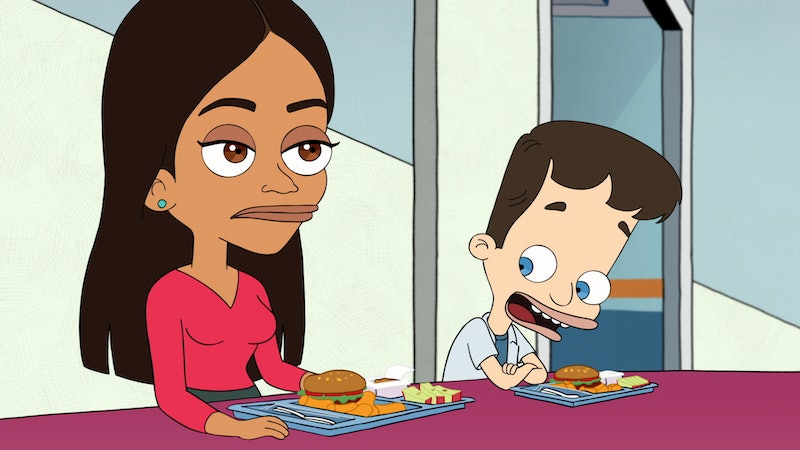 As if she wasn't busy enough stealing people's hearts with her award-winning comedy series, Jane the Virgin, and her slew of other upcoming projects, Gina Rodriguez is also voicing Gina in Big Mouth Season 2. Her character is a girl on Jessi and Missy's soccer team who "shakes up the social dynamics of the school," according to a press release. And her first appearance on the show certainly draws some eyes, to put it mildly.

Made obvious by her other upcoming gigs, this isn't the first time Rodriguez has tried her hand at animation, nor is it her first go-round with adult comedy. However, put the two together, and you do have a first for her — Big Mouth will be her adult cartoon debut, and she seems pretty dang excited about it.

"I couldn’t share it before but now I can! I’m in season 2 of BIG MOUTH and IM IN LOVE WITH THIS SHOW," she wrote on Twitter. "[MARATHON] IT RIGHT MEOW."

If you're not familiar with the premise of the series, it follows a gang of bewildered middle schoolers as they navigate their way through puberty. They're often joined by a crude and unceremonious Hormone Monster who influences their (sometimes questionable) decisions and impulsive feelings. In Season 2, fans will meet The Hormone Monster's mortal enemy: The Shame Wizard, who haunts the kids with guilt after they make mistakes. And that's just the beginning of it.

In the trailer for the show, Nick seems to have a crush on Gina (or her boobs, at least). He has a hard time controlling his wandering thoughts, and fantasizes about kissing her on a cushy bed. But, unfortunately for him, Gina has a boyfriend. Still, we all know how obscure and fragile middle school relationships can be, so there may be a chance for Nick after all. Or, another classic love storyline: He'll end up in the dreaded friend zone.

Speaking of friends, Gina seems to run into trouble with hers on the show. Middle school being a hotbed for juicy gossip, a meme of her is created reading, "Hi, I'm a slut." Naturally, it makes it to the screens of everyone in school. The show is known for its frank, vulgar explorations of early pubescence, including those that are often problematic in real life. This subplot for Gina could open up an intentional conversation about the issue of slut-shaming and how it arises at such a young age. Another reason to love this show — it doesn't just give viewers a good laugh, it sheds light on topics that are too often brushed under the rug.

That's why Rodriguez fits into the cast so perfectly. It's no secret that, in her personal life, she's an advocate and an activist who doesn't stand for unwarranted silence. She's a spokesperson for Always, the feminine hygiene brand, and she uses it as a platform to raise awareness for period poverty — a term used to describe the scarcity of accessible period products and the lack of conversation surrounding it. And that's just one of the causes she stands for.

"We have a barrier happening in this country where young girls are leaving school due to their lack of access," Rodriguez told ABC. "That's something we can fix." Ironically enough, periods are another extremely relevant middle school topic, so maybe Gina will get the chance to bring it up on Big Mouth — as long as the hormone monster doesn't get to her first.