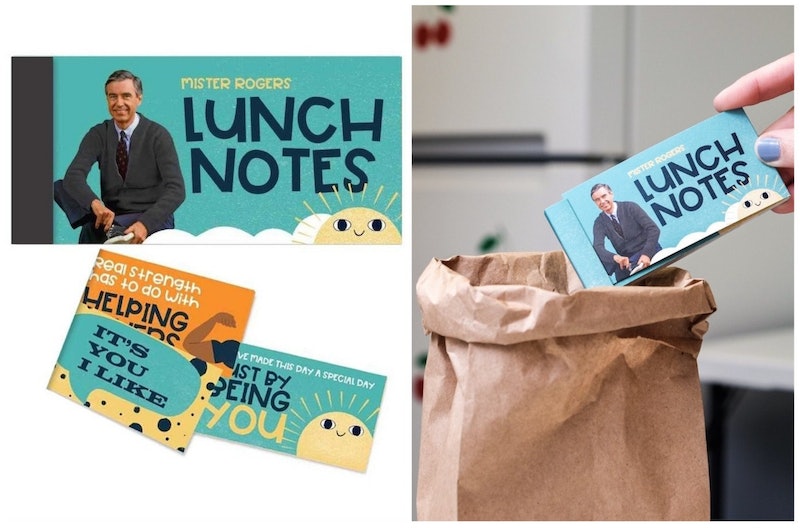 Humans have been putting little notes for the people they love inside lunch bags, boxes, and parcels for… well, pretty much as long as packed lunches have been a thing. And while it’s true that all you need to make one is a piece of paper and something to write with, themed lunch box note sets have recently become A Thing — and honestly, I’m not mad about it. Because those themed sets include these Mister Rogers Encouragement Lunch Notes, and Mister Rogers Encouragement Lunch Notes are quite possibly one of the greatest things I’ve ever seen. They are delightful.

The Mister Rogers lunch notes set is just one of a whole collection of Mister Rogers-themed items made by a company called Papersalt — a division of Seattle-based design and printing company Revolution, which was originally formed in 2003. Papersalt’s wares range from illustrated books to wall decals, all of which carry messages of positivity. In that sense, it absolutely fits that Papersalt would have a Mister Rogers collection; Fred Rogers is maybe one of the most positive people who ever lived, and Mister Rogers’ Neighborhood brought that positivity and kindness into homes across the country for more than three decades.

Available at quirky e-retailer Always Fits, the Mister Rogers Encouragement Lunch Notes book holds 20 tear-out cards, each about four inches by two inches, with one of Mister Rogers’ notable sayings on the front. The backs are left blank for you to fill in your own words of encouragement — like so:

Who wouldn’t love finding a message like that in their lunch? Whether you surprise someone else with one or tuck one in your own lunch to remind yourself that you’re awesome, it’s just the kind of midday pick-me-up that can keep you going when the going gets tough.

I watched Mister Rogers’ Neighborhood as a kid, of course — as child of the ‘80s growing up right in the middle of the show’s 33-year run, I considered it to be a vital fixture of my childhood cultural landscape — but in revisiting both the show and Fred Rogers himself as an adult, I find the lessons they taught to resonate more powerfully than ever before. A lot of that, I think, is because so many adults seem to have forgotten them, if they ever knew them at all.

It’s true that the world adults navigate is infinitely more complex than the one children do; at the same time, though, a lot of the concepts that Mister Rogers’ Neighborhood taught us are applicable no matter what age you are: “Different” doesn’t mean “bad”; you can be kind to someone even if you disagree with them; and you don’t have to be anyone other than who you are — not what other people want you to be, or who they think you should be. And, as Bustle’s Danielle Burgos put it in a piece on the documentary Won’t You Be My Neighbor?, “[Rogers’] lessons in emotional intelligence weren't about blind confidence; they were about how thoughtful questioning and examination can lead to greater compassion.”

Lunch notes might seem like small potatoes in the grand scheme of things. Heck, maybe they are. But sometimes, it’s the little things that matter most — and words of encouragement found in unexpected places can go a long way towards brightening someone’s day.