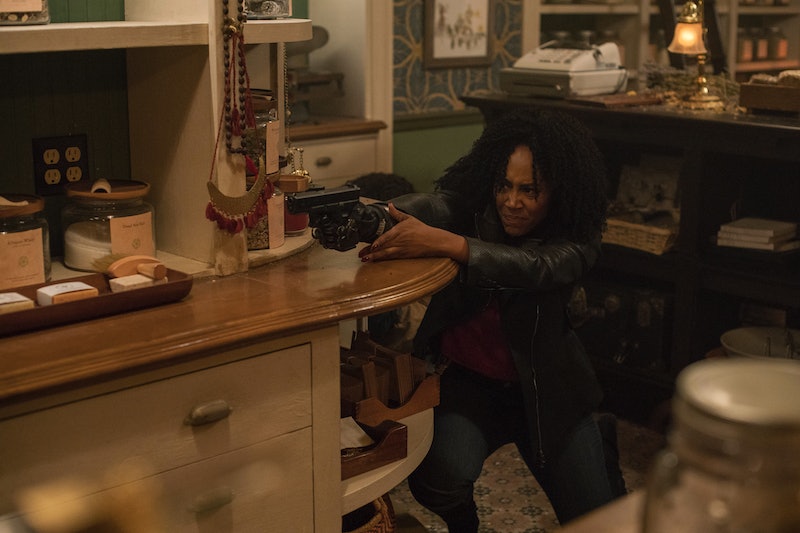 A new hero is rising on Luke Cage — Misty Knight (Simone Missick), who was already accustomed to saving the day in Season 1 but in Season 2 is edging closer and closer to her comic book counter part, bionic arm and all. Her journey is a highlight in the new adventures of Harlem's hero and an affecting one at that. Misty has visions of Scarfe on Luke Cage and it's sad to see her partner's death hurting her so much. There are mild spoilers for Luke Cage Season 2 ahead.

In Episode 5, Misty is alone in her office, and the memory of Rafael Scarfe (Frank Whaley) appears. Her partner died in the middle of Season 1 after attempting to blackmail Cottonmouth (Mahershala Ali), who he had secretly been working for as an enforcer and an informer. When he appears to Misty, they talk about the case. They banter about sports. It's like old times, except that he lowkey convinces her to plant evidence on a suspect — which she almost does. The temptation to go dirty cop is almost more concerning than the vision itself.

Was he really there? Is he a ghost, or does this mean she has powers? As Danny Rand the immortal Iron Fist would love to remind viewers, this universe contains dragons. The paranormal could be next, and Agents of S.H.I.E.L.D. has already dipped into that pool in the MCU.

However, the scenes between Misty and Scarfe are probably nothing more than an imagined conversation and narrative device on the Netflix series. Before losing her partner in Luke Cage Season 2, Misty did that classic television detective thing where she envisions how a crime went down and, on screen, the scene happens around her as she is describing it. This device is used again in the second season. So envisioning things isn't completely out of the ordinary for the character.

This season, Misty is drawn towards the vigilante life. She's not settling back into police work easily. She's alienated from her coworkers after losing her arm. Plus, the power that Luke wields as a hero for hire has got to be equally tempting. While she'll never be anybody's sidekick, Misty is clearly on a path to becoming at least a private detective it not a mask-wearing vigilante herself.

The problem is, and that's what Scarfe's appearance may represent in the show, is that while Luke has made a name for himself as a hired hand, Jessica Jones can be persuaded to moonlight as a hero, and Danny has his burning fist, that's not all that vigilantism means — especially to a police officer. Taking the law into your own hands is also what dirty cops do.

Not only was Scarfe in the wrong for helping Cottonmouth, a villain, but it also got him killed! Scarfe turned to high paying corruption when his son died in an accident. When he tried to make things right, he got shot. Misty seems keenly aware that her own grief and guilt could lean her down a similarly dark path.

The visions don't continue as the season progresses, so no need to worry about Misty developing any paranormal senses. The magic and mystical can stay with Mariah's daughter Tilda (Gabrielle Dennis) on Luke Cage for now. And it is good to see Scarfe again, even if just momentarily. His dynamic with Misty was fun and supportive, despite the eminent betrayal bubbling underneath. Hopefully he'll show up again at some point in the future of this franchise, but just in flashback. Not only would that increase the chances of Ali returning as Cottonmouth, but the fact that Misty is hearing voices and talking to her partner is not good. It may be part of her healing process, but ultimately she has to move on from his death and towards her own heroic destiny.