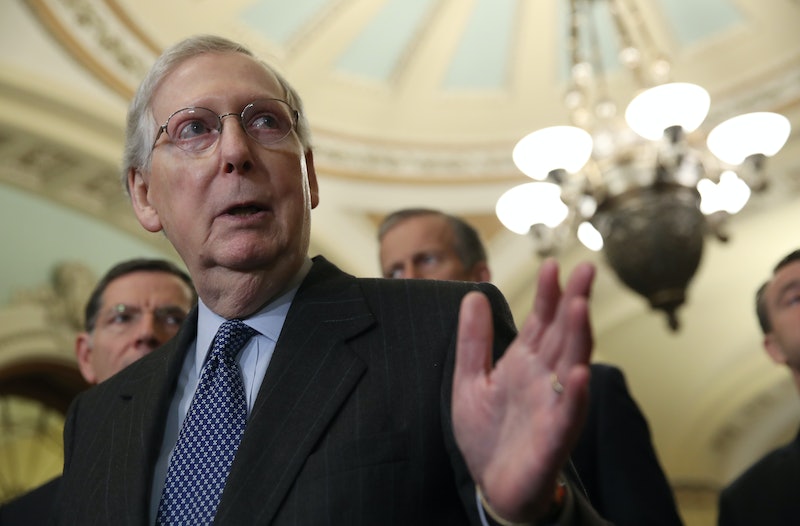 Senate Democrats have introduced a bill that, among many other things, would make Election Day a federal holiday, meaning all federal and many private-sector employees would be given time off of work to vote. But on the Senate floor Wednesday, Majority Leader Mitch McConnell suggested Election Day shouldn't be a holiday because if it were, Republicans would lose elections.

"[Democrats]' bill would make Election Day a new paid holiday for government workers," McConnell said Wednesday, according to the Hill. "Just what America needs — another paid holiday." He went on to call the bill a "political power grab" by Democrats, and said that he won't put it up for a vote in the Senate, effectively killing it.

A week before McConnell denounced paid holidays for federal employees, over 400,000 government employees were working without any pay at all on account of the government shutdown. McConnell played a key role in perpetuating that shutdown, namely by blocking several bills that would have reopened the government and reinstated those workers' paychecks.

Just as noteworthy is McConnell's claim that giving Americans the day off of work to vote constitutes a "power grab" by Democrats. This implies that the Democratic Party would benefit if it were easier to vote, which in turn implies that expanding voting access would hurt Republicans electorally. Bustle has reached out to McConnells' office for clarification of what he meant by this.

The Election Day holiday provision is just one voting-related part of H.R. 1, the sweeping reform legislation that Democrats introduced shortly after winning control of the House of Representatives in the midterms. The bill would also automatically register Americans to vote, bolster election security, place restrictions on voter roll purges and end partisan gerrymandering of Congressional districts.

The bill would also substantially increase federal funding for political campaigns in a manner that would benefit candidates with small-donor support. Under the legislation, the federal government would match every small donation to a candidate — defined as a donation under $200 — by a factor of six. H.R. 1 also includes the DISCLOSE Act, which requires super PACs to reveal the names of their donors, as well as the Honest Ads Act, which would require large digital platforms like Facebook and Twitter to disclose the source and funding of political ads on their networks.

That's not all. H.R. 1 would also increase the number of commissioners on the Federal Election Commission from four to five, to prevent deadlocked votes, require presidential and vice presidential candidates to produce 10 years of tax returns, and prevent members of Congress from using taxpayer funds to settle sexual misconduct lawsuits.

In his comments Wednesday, McConnell claimed that H.R. 1 would result in "a bunch of government workers being paid to go out and work for, I assume...our colleagues on the other side, on their campaigns." The bill does not do this, however, and it's unclear why McConnell has assumed that federal workers would use their one-day holiday to work for Democratic political campaigns.