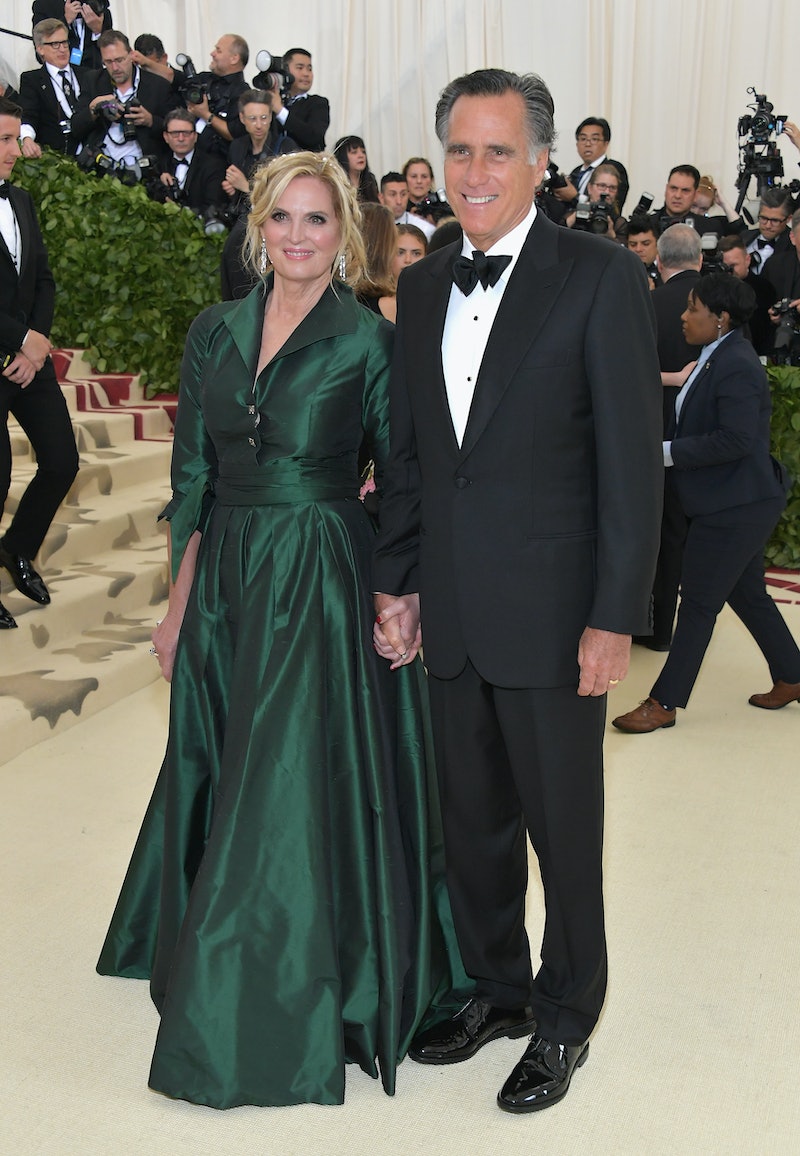 Among the usual assortment of celebrities and fashion icons, a surprising face was spotted at the Met Gala on Thursday: Former Massachusetts Gov. Mitt Romney, who attended the event with his wife Ann. Even more surprising is the fact that, according to the New York Times, Romney bought his Met Gala tuxedo on Amazon.

The Times reports that Romney was wearing a size 40 Brioni tuxedo at the event. He told the paper that he bought it at a significant discount on Amazon; according to the Times, Ann interrupted him and said "don't you dare!" as he was about to reveal where he bought the tux. Although its unclear precisely which suit he bought, a quick search reveals that Brioni tuxedos generally go for around $2,000 on Amazon. That is quite the discount from the $5,000-plus prices Brioni charges for tuxes on its website.

Romney told the Times that he wasn't "entirely aware" of the gala itself prior to attending, but had been invited by his friend and business associate Stephen Schwarzman, an honorary chair of this year's event.

The news of Romney's discount tux comes on the heels of his controversial statement that hot dogs are his favorite type of meat — and believe it or not, these two things might actually be related.

Romney announced in February that he's running for the U.S. Senate seat currently held by Orrin Hatch, who's retiring at the end of his term. His comments about buying discount suits and preferring hot dogs to steaks both paint him as an average, relatable guy — which is potentially helpful for a politician who's often perceived as stilted and out-of-touch with regular voters.

However, Romney probably doesn’t have anything to worry about, as the limited polling that’s available suggests he’ll have little trouble becoming the next junior senator from Utah. A February poll from UtahPolicy — the most recent survey of that state that's been released — shows him with 46-point lead over his Democratic opponent in the deep red, heavily Mormon state. What's more, 18 percent of Democrats in the state said they'd vote for Romney in the upcoming Senate race, according to a January poll from the Salt Lake Tribune and the University of Utah, so he already has good reasons to be optimistic about his chances.

It's a significant turnaround for Romney, who's seen more failures than successes in his political career. Though he did serve one term as Massachusetts governor, he's lost most of his previous campaigns for office, including a Senate run in 1994, a bid for the Republican presidential nomination in 2008, and the general presidential election four years later. Romney was also passed up, very publicly, for a position as President Trump's Secretary of State, leading many to suspect that his political career was essentially over.

But all of that changed in January, when Hatch announced his retirement from the Senate. Romney had reportedly been rumored to be eyeing a Senate run for months before that, and in fact moved to Utah shortly after losing the 2012 election. He had reason to be optimistic, given that Utah went for Romney by a 48-point margin in 2012, and with Hatch out of the way, he immediately became the frontrunner for the newly-open Senate seat.

Though it's not clear yet what kind of role Romney will assume if he becomes Utah's next senator, his frequent criticisms of Trump suggest that he may serve, along with Lisa Murkowski and Susan Collins, as one of the few counterbalances to the president within the Republican Senate caucus. Until then, he's in a comfortable enough position in Utah that he can afford to spend some time hobnobbing with the stars at the Met Gala.