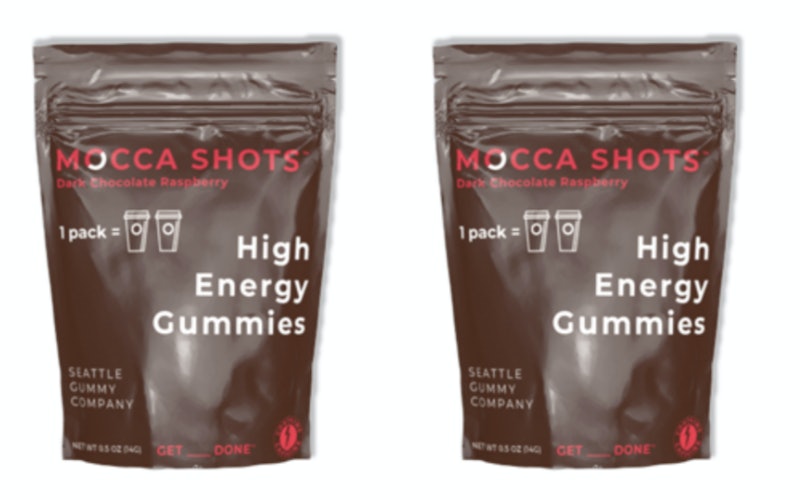 In news that alone will give jitters to the caffeine sensitive amongst us (hello!), new caffeine gummies have been released by the Seattle Gummy Company, and they pack a serious punch. According to Foodbeast, each gummy contains slightly more caffeine than the average 8 oz. cup of coffee. So, yeah, don't eat these by accident.

The gummies are called Mocca Shots High Energy Gummies, and according to the Seattle Gummy Company's website "work 5x faster than coffee" because of the way they're absorbed into the body. The Mocca Shots come in two flavors: chocolate raspberry and chocolate orange. The Seattle Gummy Company claims that combining chocolate with the caffeine reduces the jittery side effect associated with caffeine. (For more information on this idea, here is information on one study of how a caffeine and cocoa combo affected participants; it was sponsored by the Hershey Company.) According to FoodBev Media, the company claims their gummies have the highest caffeine concentration currently available on the market.

The Mocca Shots are going for $33 for a box of 12 pouches, with each pouch containing two gummies. Each gummy contains 100mg of caffeine, while an average 8 oz. cup of coffee has 95mg. There is also an option to buy a "sample pack", which is a four-pack of gummies (two of each flavor) for $9.99. According to FoodBev, the CEO of the Seattle Gummy Company, Dr. Connie Wan, said that "Next to an IV, Mocca Shots are the fastest way to deliver caffeine directly into the bloodstream."

The Seattle Gummy Company is not a candy company that is selling caffeine infused gummies, but rather a company that specifically makes gummies with active ingredients and bioactive compounds. They also sell products including, "pre-workout gummies", multivitamins, and prenatal vitamins.

Of course, Mocca Shots aren't the only caffeine gummies or candies that exist. Go Cubes are "chewable coffee" that come in packs of four cubes, with each cube containing 50mg of caffeine. They are available in four flavors: latte, mocha, and pure drip. Like the Mocca Shots, Go Cubes also claim to reduce jitteriness.

There are also Dry Brew coffee chews that have 65mg of caffeine per chew. According to the Dry Brew site, they are made from real coffee, non-dairy creamer, and a zero calorie sweetener.

And switching things up from the chewy consistency, a brand called Awake makes caffeinated chocolate and granola bars, with each bar said to have the same amount of caffeine as a cup of coffee.

While these gummies, chews, and bars clearly appeal to some caffeine consumers, they're definitely not for everyone. For one, anyone interested should be sure to check out the ingredients and nutrition facts for each products in order to decide if the product might suit them. But also, a lot (like, a whole lot) of people just like having coffee. Whether it's making it yourself or going to your favorite shop, there's a ritual to it — boiling the water, pouring the milk, asking Starbucks for a shot of espresso in a grande cup — that you just can't get from chewing a gummy. When it comes to coffee, to each their own.