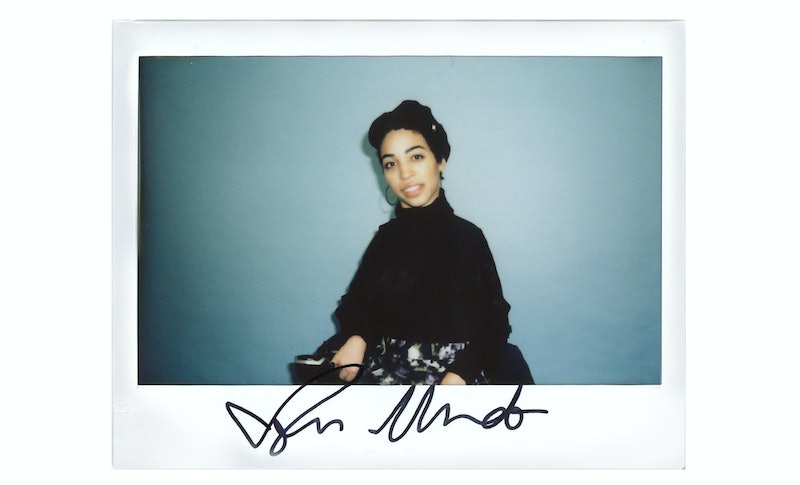 When celebrities hang out with Bustle writers, we want to give them the chance to leave their mark. Literally. So we hand them a pen, a piece of paper, a few questions, and ask them to get creative. The rest is up to them. This time, model and activist Jillian Mercado is leaving her mark in the Bustle Booth.

When Jillian Mercado tells me she’s an alien, I don’t question her. In fact, the revelation makes a lot of sense. As a Latinx model with a visible disability, Mercado says she is used to being othered simply by existing in a room, hence always feeling otherworldly.

Mercado was born with muscular dystrophy, a disability characterized by muscle spasms and weakness. Ever since she can remember, Mercado has used a wheelchair to get around. Because of this, her disability experience can often precede her introduction, leaving Mercado on the outskirts of a society that can be anything but welcoming.

“It’s like I am an actual alien from another universe and I’m studying the human experience,” Mercado tells Bustle. “That’s what it feels like to live as someone who has a visible disability. [Non-disabled people] make you feel as if you’re not part of their world.”

Although it can be frustrating to live life as an “alien,” Mercado says it has also informed her views of beauty. As a Latinx model with a disability who breaks beauty standards in several ways, Mercado says she notices beauty more than the average person, seeing it in nooks and crevasses others can’t due to her unique position.

“Growing up, the only reference to beauty was this white girl with blue eyes and blonde hair, and that was considered beautiful,” she says. “Your whole self-esteem is based on, ‘Well if that’s beautiful, and I’m looking in the mirror and I’m not even remotely close to that one, then that means that I’m not beautiful. So, now what? Now I’m here with a really ugly face, apparently, and entertainment and fashion and beauty all say the same thing.’”

"I not only embrace all my communities, I fight for them to the death."

Mercado is proud of her “alien” identities, but she admits it took her a long time to get to that point. Part of the reason is that image of the “perfect model” with white skin, blonde hair, and blue eyes. With caramel skin, brown eyes, and hair that is often changing hues, Mercado exists in opposition to this poster girl. And that’s not even to mention her disability status, which is relatively unheard of in the modeling industry.

“I started off kind of being mad, like I had so much responsibility,” Mercado says. “I’m a female and that’s already a whole deal. I’m Latina and that’s another deal. I have a disability and that’s another deal. [And that's] not even hitting the way those communities intersect. It’s almost overwhelming. Five years ago, I had to sit with myself and go ‘Well, this might be the most badass thing ever…’

“Now, I not only embrace all my communities, I fight for them to the death,” Mercado adds.

"Just be you, and know how beautiful and how much of a privilege it is to have that moment where you can just be yourself and not have any judgment from anybody else."

With the beauty industry opening up in recent years to include more faces like Mercado’s in major campaigns, more and more people are beginning to see themselves represented in advertisements, magazines, and runway shows. (Mercado has appeared in campaigns for Diesel, Target, Olay, and more.) The same qualities that have made Mercado “alien” to some are now making her familiar to others who have never seen themselves reflected in media. And to those people, Mercado hopes to represent a new type of beauty.

“I just hope that [underrepresented people] see themselves in me, in any way possible,” she says. “Even if it’s our similarities in music or the fact that we both like 16 Handles, hopefully people take away that it’s OK to be your authentic self. Just be you, and know how beautiful and how much of a privilege it is to have that moment where you can just be yourself and not have any judgment from anybody else.”

Check out Mercado's answers to our Bustle Booth questionnaire below.