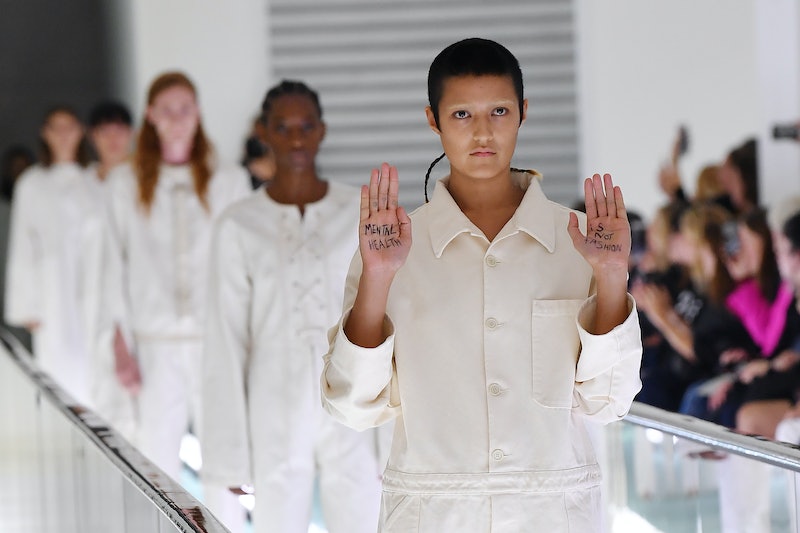 The Milan runway just got political with one model's protest against the exact show they were walking in. Model Ayesha Tan-Jones' Gucci Runway protest made a statement against the luxury brand using straitjackets on the runway. With a simple "Mental health is not fashion" scrawled across their palms during the show, Tan-Jones is starting a conversation about the brand's reference to mental illness during its presentation.

Gucci's runway show during Milan Fashion Week featured a variety of colorful and vibrant new designs for the Spring/Summer 2020 season. Those creations were shown alongside white utilitarian uniforms, including straitjackets. The uniforms were not part of the new collection and are not being sold, according to Gucci's Instagram page. But Tan-Jones, who walked Gucci's runway in a white utility suit alongside models in the straitjacket version of the look, felt the jackets were not in good taste. They wrote on their Instagram account following the show that they believed mental health was being used as a fashion statement by the designer, leading to their silent protest.

Prior to walking in the show, the model took a marker and wrote in bold lettering, "Mental health is not fashion" on their palms. Tan-Jones then held up their hands as they went down the runway, wearing one of the white uniforms. Bustle has reached out to both Ayesha Tan-Jones and Gucci for comment.

Tan-Jones explained their decision to stage the protest in their Instagram post, stating the message was a way to express that mental health stigma has to end. The model gave multiple statistics regarding the rate of mental illness and suicidal ideations among LGBTQ individuals, stating that black, brown, Indigenous, and Asian populations have higher rates of mental illness.

Tan-Jones wrote on Instagram, "It is in bad taste for Gucci to use the imagery of straightjackets and outfits alluding to mental patients, while being rolled out on a conveyor belt as if a piece of factory meat. Presenting these struggles as props for selling clothes in today's capitalist climate is vulgar, unimaginative, and offensive to the millions of people around the world affected by these issues."

Since Tan-Jones' protest, Gucci has released a statement on Instagram explaining what they call Creative Director Alessandro Michele's "utilitarian designs." According to the fashion house, the pieces were rooted in the idea that fashion can be used to both stifle and embrace self-expression. The juxtaposition of the uniforms and the Spring/Summer 2020 pieces were meant to "convey[s] fashion as a way to allow people to walk through fields of possibilities, cultivate beauty, make diversity sacrosanct and celebrate the self in expression and identity."

Michele also released a statement to The New York Times regarding the show. The creative director said, "I wanted to show how society today can have the ability to confine individuality and that Gucci can be the antidote. For me, the show was the journey from conformity to freedom and creativity. Uniforms, utilitarian clothes, such straitjackets, were included in the fashion show as the most extreme version of restriction imposed by society and those who control it. These clothes were a statement for the fashion show and part of a performance."

Tan-Jones' Gucci protest isn't the first time that the luxury fashion brand has come under criticism this year. In February, the label released a wool sweater that some alleged resembled black face imagery. The brand issued a statement apologizing for the piece, and pulled it from sales explaining that "diversity is fundamental" to the fashion house.

As for Tan-Jones, alongside fellow models, they have decided to donate a portion of their earnings from walking on the Gucci runway in Milan to mental health charities.