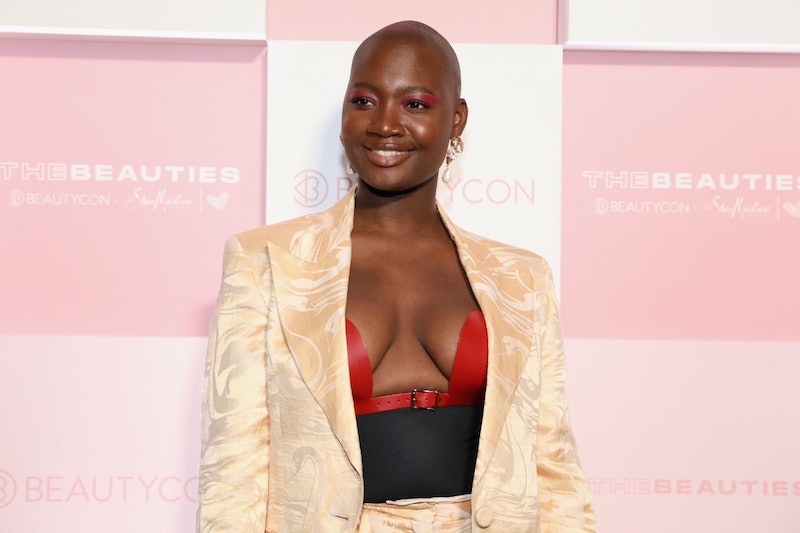 Between modeling for houses like Chromat and Savage x Fenty and her prolific Instagram presence, blogger and model Mama Cax has made a name for herself in the fashion world. After undergoing a leg amputation following her diagnosis of an aggressive bone cancer at age 14, Cax has also been a major advocate for representation and accessibility in fashion. Now, Cax, 29, is going after the next stage of her goals: she's training to hand cycle the New York City Marathon this November.

"I've always dreamed of doing a marathon because I just think it's so important to keep challenging myself," Cax tells Bustle. Developed in the 1980s, hand cycling makes many competitive sports and recreational activities accessible to people with physical disabilities. Around 50-70 people hand cycle the TCS New York City Marathon each year, and the sport requires a major amount of cardiovascular efficiency and upper body strength to hand cycle for 26.2 miles.

The marathon, which Cax is running as part of New York Road Runner's Team #MovedMe, won't be her first major athletic event, though. Before her cancer diagnosis, Cax tells Bustle, she played basketball and ran track as one of the fastest people in her class. But after chemo and her amputation, Cax says, "I didn’t think there was a space for me anymore in sports." Even when she tried swimming, it became too much for her system, emotionally and physically. "Everyone was staring at me, making comments," Cax says, which made the already difficult task of relearning a sport even more challenging. "I was already in a state that swimming didn’t feel very welcoming."

But around 18 years old, Cax started to research the broad variety of adaptive sports, which are sports and athletics for people with physical disabilities. And after teaching herself how to swim again and building stamina from that, Cax went on to start playing wheelchair basketball. And while adaptive surfing and rock climbing are what she's into more recently, she's now turned her sights to the marathon.

Cax started her marathon training during a chaotic period of traveling for business (which included New York Fashion Week and walking in Rihanna's Savage x Fenty show), so she had to figure out how to train while on the go. Push-ups, pull-ups, and core work were key parts of her training while traveling. And while some of her workouts were adapted to her body's needs, Cax tells Bustle that "some of these workouts are not adapted in any way."

This is particularly important, because Cax's knowledge of exercise and expertise about her own body became the most important factors in her training programming. "I know how to do an unadapted exercise, but sometimes it doesn't translate well when I do it, or it doesn't benefit me as if someone else was doing it" And adaptations that make exercises work for others do not necessary work for Cax. "Laying on the floor to do certain exercise can get very painful, or it's not working out the muscles that it’s supposed to, or it’s doing me a disservice as opposed to working the way it’s supposed to."

To ensure that she knows which exercises are going to be beneficial to her and which are not, she listens to the number-one expert on what she needs: herself. "I think it comes down to carefully watching your body and listening to it," she tells Bustle. Because even if a stretch, as conventionally taught, is said to stretch one muscle while relaxing others, Cax says that her body just doesn't work like that with different movements. When she pays attention to her body, it helps her customize her workouts to be most beneficial to her. "I think sometimes there’s no specific workout that I can get in based on how my body is," she says, "so oftentimes I just have to experiment with different workouts."

This agency and choice over the way that she trains is very important to Cax's perception of being an athlete, she tells Bustle. "I’ve always seen how people with disabilities in sport have always turned into some inspirational story," she says. The culture of depicting people with disabilities as one-dimensionally "inspirational" is "toxic to the person in the spotlight, because then it diminishes the hard work that they're put in. And it's also toxic to anyone who's seeing who will feel bad because they haven't trained for one or they're not working out, where the reality is, some people don't want do a marathon or don't want to work out, and some people cannot."

And while Cax is excited about her marathon, she wants to remind other people with disabilities that they don't owe it to anyone to be "inspirational" and run marathons themselves. But if you want to get into athletics as a person with a disability, Cax wants you to know that it is possible even when society tells you otherwise. "No matter what sort of sports you want to get into," Cax says, "there's always a way to do it."

More like this
10 Primal Movement Exercises That'll Improve Your Mobility
By Carolyn Steber
How Many Burpees Should You Do Per Day? Here’s What Fitness Trainers Say
By Carolyn Steber
The 11 Benefits Of Aerial Yoga, According To Trainers
By Carolyn Steber
Paul Rudd’s Secret To Eternal Youth Is Something You Can Try At Home
By Darshita Goyal
Get Even More From Bustle — Sign Up For The Newsletter
From hair trends to relationship advice, our daily newsletter has everything you need to sound like a person who’s on TikTok, even if you aren’t.