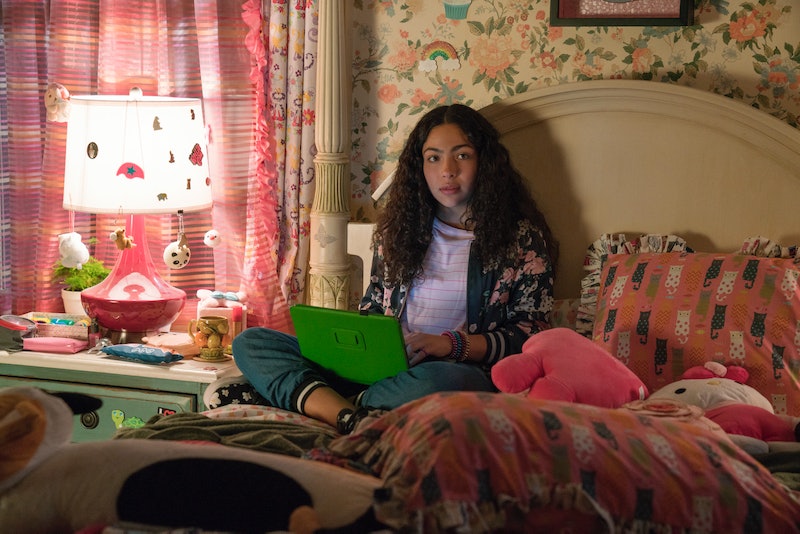 Molly Hernandez is destined to be underestimated. Amongst her friends, she is the youngest and physically the smallest. Chances are, anyone fighting the group would be least scared of the Runaways' Molly, played by Allegra Acosta, at least at the start. They'd also be dead wrong. This powerful character is a testament to the fact that, while the world continues to deride and underestimate young women, they continue to get things done.

"[Young women] have more to offer than what people see of us," the 14-year-old actor tells Bustle, sitting in a lounge at New York Comic-Con. "We’re badasses. And I think we can take over the world."

As Molly's adoptive parents believe she's just going through the universal changes of puberty, she also goes through a few that are unique to her. Namely, Molly displays explosive bouts of super-strength that leave her in a deep slumber afterwards.

Acosta wasn't familiar with the original comics until she secured the role, and even then, wasn't fully aware of how much fans looked up to Molly. The actor recalls her shock at castmate Ariela Barer, who plays Molly's adoptive sister Gert, telling her that she's "playing a girl who’s Top 4 on the Marvel’s Strongest Females" list. But while Molly can punch harder and lift more weight than anyone else in the Runaways (and probably most other characters in the Marvel Universe), her true strength comes from making the most of bizarre and challenging situation.

Since the rest of her fellow Runaways are trying to cope with their parents possibly being a part of an evil murder cult, no one is willing to listen to Molly as she tries to tell them about her feats of sudden strength. As the physically dominant member of the group, she's still barely respected or listened to. However, Acosta finds something wonderful in how Molly never gives up on herself.

"What I love about Molly most is that she’s also strong and mature and observant and aware," she says. "And she’s very determined. And vulnerable, still human."

In fact, Acosta sees Molly as not just a character to play but an opportunity to inspire. Runaways is adding some much-needed diversity to the world of superheroes. While the Marvel Cinematic Universe is mostly populated by white men, the TV show was cast to represent the varied demographics of the characters in the comics. And Acosta says she's "so happy to be a part of a show where I get to be a Latina superhero."

Acosta is the same age as her character, and since Runaways deals with real-life teen issues in addition to saving-the-world-type stuff, the actor is easily able to see herself in Molly. "Molly and I have a lot of things in common," she says, "So when I was working with her, I wanted to put a lot of myself in her." And Acosta hopes that other teenage girls — and those who underestimate those girls — will get the empowerment message right away.

"I’m going to get to broadcast to the world of people watching [Runways] and girls my age just that they can be whatever they want to be and have fun with themselves and enjoy life not being worried about [fitting a] standard type," she explains. "What’s wrong with society is that so many women [of all ages], they all run into one stereotype, into one body type, or into one personality type that we have to fill... which I think is total BS."

As institutions that young people are meant to trust in are letting them down, from government to law enforcement to higher education, the Runaways represent the necessity of questioning authority and fighting back against oppression. And this young performer believes that there couldn't be a better time for these kind of crusaders. Without parents they can trust or any other adults to turn to, the Runaways would be shining examples of justice-seekers, even if they didn't have magical staffs or psychic dinosaurs.

"[Runaways] represents that we can be our own heroes. And what do superheroes do? They fight for things; they protest for things that they really believe in," Acosta says. "I think it’s amazing that I get to portray such a strong character at my age, because kids can do anything. And I think people belittle us and have preconceived notions about kids. It’s really important for us that we can also be the higher power and the change."

It's seems that Allegra Acosta and Molly Hernandez are even better at smashing stereotypes than they are at smashing cars.