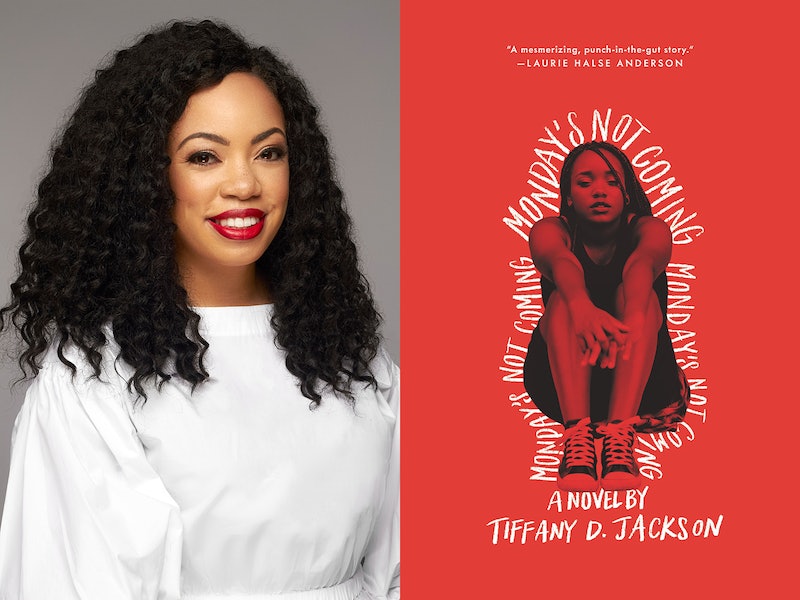 In her YA thriller Monday's Not Coming, author Tiffany D. Jackson spins a tale of murder, neglect, and systemic racism, all told through the lens of a middle school aged girl. When Claudia's best friend, Monday, goes missing, it feels like she's the only one who's noticed she's gone. Everyone tells her to mind her own business, to stop snooping around. But she knows something is wrong. When she finally finds someone to help her investigate Monday's disappearance, she unearths some painful, shocking secrets about her best friend's life.

Monday's story is fictional. Unfortunately, it's inspired by very real events: When black girls go missing throughout the country, they're disappearances are often ignored by police, the media, and even their own communities. This epidemic led to the creation of the hashtag #MissingDCGirls in 2017.

Tiffany D. Jackson knew she wanted to address this injustice in her new thriller — and she succeeded in drawing attention to the problem through the wrenching, painful story of Monday and Claudia's desperate search for her. I asked Jackson about what cases specifically inspired Monday's Not Coming and how she ensured that her writing did justice to the victims of these crimes and injustices — black girls.

Bustle: Can you tell us about the true story that inspired Monday's Not Coming?

Monday's Not Coming is based on two real cases of missing children­ — one that took place in Washington, D.C and one that took place in Detroit. Hard to point to the cases without ruining the ending of the book but both cases involved children who had been missing for up to two years, yet no one noticed [they were missing] until their bodies were found.

What elements from the real story (or stories) did you incorporate into your novel?

I incorporated the way kids slip through the cracks in the system, the way there is no immediate sense of urgency when black teen girls go missing, and lifted parts of their tragic end. I also focused on the media bias when it comes to reporting about missing white children vs. missing children of color. Coincidentally, when I turned in the book to my editor, the hashtag #missinggirlsDC had just gone viral.

"I incorporated the way kids slip through the cracks in the system, the way there is no immediate sense of urgency when black teen girls go missing..."

It’s crucial for authors to not only respect the victims but also respect the families by doing solid research and making their stories appropriately different. Additionally, in all of my school talks and book chats, I make it a point to teach kids the difference between ‘based on’ vs. ‘inspired by’ so that readers are fully aware my books are not the carbon copy of someone’s tragedy.

At first, I honestly thought the conversation was a bit over-reaching. But then a friend referenced the way Hae Min Lee was treated in the Serial podcast, how it focused solely on proving Adnan Syed innocence and not on a beautiful life violently taken too soon. I realized, more often more than not, girls become nothing more props in a story. They’re not the elephant in the room, they’re merely pieces of living room furniture you can easily overlook, subsequently taking away their humanity and detaching us emotionally. Also, we never think about the victim’s family or friends or the way their catastrophic loss plagues them, almost daily.

"I realized, more often more than not, girls become nothing more props in a story. They’re not the elephant in the room, they’re merely pieces of living room furniture you can easily overlook..."

I prefer to give my victims an unforgettably strong voice, either through their own words or through the people who loved them, allowing readers to know them inside and out, so they’re not just a body on a page. In Monday's Not Coming, I used flashbacks to reveal how Monday and Claudia’s friendship developed over time, so that when Monday is missing, you truly feel Claudia’s loss more than you would have if you never knew Monday.

What are some books, movies, or podcasts based on a true story that you always recommend to friends?

Atlanta Monster is an in-depth look into the infamous Atlanta Child Murders, which occurred between 1979 and 1981 with over 25 victims. The podcasts speaks to the racial bias happening in Atlanta around that time and how it affected the community. Also Criminal and Sword and Scale. (Hint: Episode 67 of Sword and Scale is the Detroit case my book is based on.)

This interview has been edited for clarity.