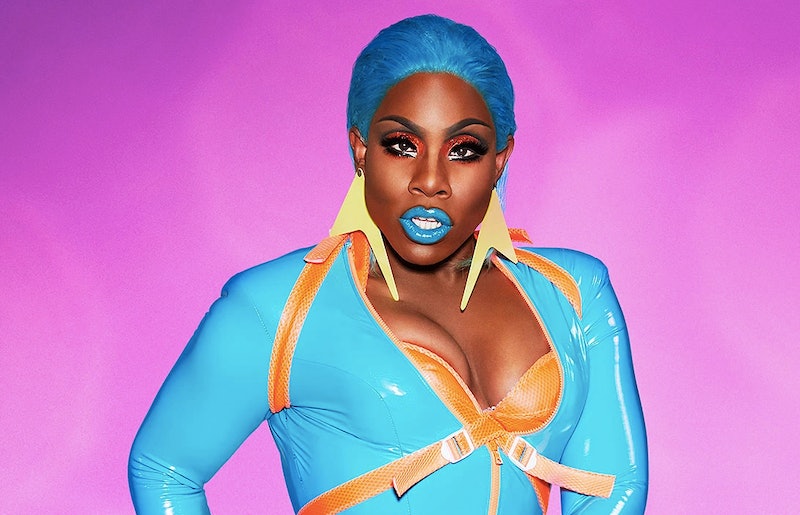 Season 10 has been a tough ride for Monèt X Change on RuPaul's Drag Race. Since finding herself in the bottom two and being forced to lip sync for her life in Episodes 4 and 5 (to the point of ruining one of her garments) she's been faced with an uphill battle to plant her feet in the competition. The good news is, after nearly being eliminated, she has proven herself worthy of staying, and has continued to impress the judges week after week. The bad news? She's always a hair away from winning the maxi-challenge, and gah, it's so hard to watch. Her extreme thirst for a win is so palpable fans can taste it. And this week, once again, she was robbed of a well-deserved tall glass of water.

She has said from the start with her Season 10 entrance that she "just came here to sweep up the competition," and there's still a chance that she will. After all, she's an experienced New York City queen, and her recent performances and runway looks on Drag Race are just too flawless to go unnoticed. She has truly stepped up her game.

In Episode 6, she mastered "Team Body" during RuPaul's DragCon Panel challenge, coining the term "Proportionizing!" and preaching body positivity. She stepped onto the runway for "Hats Incredible" wearing a southern Sunday church-inspired look with a loud twist, and the judges felt the Lord's presence for sure.

The infamous "Snatch Game" took place in Episode 7, and Monét clinched her portrayal of Maya Angelou with hilarity. Even the judges praised her for it, but yet, didn't give her a win. They even said that compared to queens who have attempted Maya for "Snatch Game" in the past, Monét had it in the bag. She delivered a soliloquy for Ru as Maya that deserved a win in itself, and it went a little something like this:

"If these hoes try to come for me, I surely will cut thee. I will not hesitate to put thou in a ditch, because Maya Angelou ain't no punk b*tch."

And neither is Monét X Change. Last week, she proceeded to blow away the judges again in "Cher: The Unauthorized Rusical" where all seven queens were tasked with impersonating a version of pop culture legend, Cher. Monèt portrayed '70s variety show Cher, and satirized all her Native American clothing controversies with ease. Not to mention her degree in opera (!!!) came through in the slaying of those vocals.

Once again, the judges praised her for her performance and her getup for Cher, but her all-black bodysuit runway look for "Glitteriffic" fell short. Because the number of queens are dwindling, she still earned a spot in the top three. So. Close.

This week, in an acting challenge dubbed "Breastworld," Monét took the stage with more confidence, grace, and humor than any other queen. The judges overtly expressed their awe of her ability to comfortably ad-lib and improvise on camera. And for their runway looks, the queens were asked to embody an older version of themselves, appropriately named "Silver Foxy." While most of the other queens went for pin-curled wigs, drawn-on wrinkles, and oversized glasses, Monét stayed true to herself. In an attempt to gag at her poor self-care practices ("I do not take care of myself, I don't have health insurance!"), she hobbled down the runway in a hospital gown attached to a liquor-filled IV bag, fake breasts sagging below her knees. Instead of opting for glamour, she chose the character she related to and stuck to it, which is admirable, and hell, it was funny.

Like a broken record, the judges were once again, unimpressed by her runway look and were hoping to see more glitz and glam. What they're failing to see is she is marrying her love of comedy, drag, and transformation in all of her looks, and that is uniquely Monét. Hopefully they understand that soon enough, and when they do, the other queens better watch out, because she will be dangerous.

More like this
Kim Kardashian’s “Gym Time” Video Features A Bikini & Thigh-High Boots
By Grace Wehniainen
All Saints Didn’t Make Melanie Blatt “As Rich As People Think”
By El Hunt
Every 'RuPaul's Secret Celebrity Drag Race' Contestant Revealed So Far
By Brad Witter
Everything To Know About 'Sweet Life: Los Angeles' Season 3
By Kadin Burnett
Get Even More From Bustle — Sign Up For The Newsletter