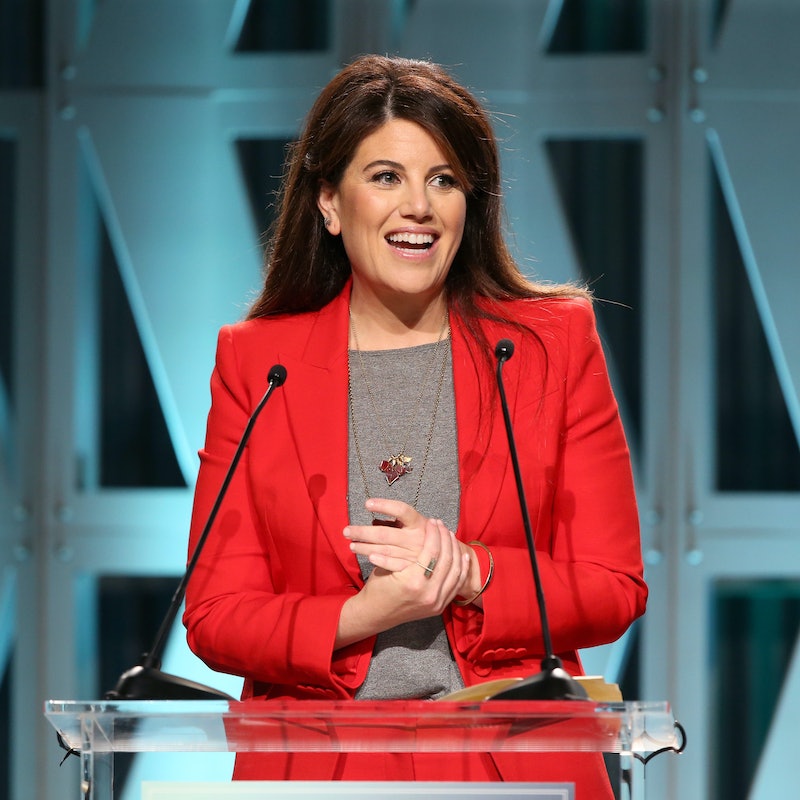 When it comes to unlikely pairings, HBO Max is preparing to deliver a collaboration for the ages. Monica Lewinsky and former Catfish co-host Max Joseph are teaming up for a new documentary on the streaming platform called 15 Minutes of Shaming. According to a press release obtained by Bustle the project will "take an in-depth look at the public shaming epidemic in our culture and explore our collective need to destroy one another."

15 Minutes of Shaming will feature individuals from all over the world who have firsthand experience with being public shamed and, as per the press release, explore "the bullies, the bystanders, the media, psychologists, politicians and experts in between."

Of course, Lewinsky herself is no stranger to facing public scrutiny and shame. In the wake of her affair with former president Bill Clinton, which ultimately contributed to Clinton's impeachment in 1998, Lewinsky faced years of public shaming. And the criticism was so persistent, it prompted her to become an advocate against bullying. Meanwhile, Joseph made a name for himself as one of the co-hosts of MTV's popular show Catfish, which attempted to expose scammers in the world of online dating. He left the reality show last year, and will be executive producing this project alongside Lewinsky as well as directing.

“Monica Lewinsky is an anti-bullying activist with unparalleled authority, making her the perfect partner for this project,” Sarah Aubrey, head of original content at HBO Max, said in a statement about the upcoming project. “And Max’s strong advocacy for social justice and distinctive storytelling make him particularly well-suited to explore this complex modern phenomenon.”

This isn't the only TV project Lewinsky has in the works right now, though. She also serves as a producer for Ryan Murphy's upcoming season of American Crime Story based on the 1998 Clinton scandal, titled, Impeachment: American Crime Story, which is set to premiere on Sept. 27, 2020. Booksmart star Beanie Feldstein will play Lewinsky while Sarah Paulson is set to portray Lewinsky’s confidante Linda Tripp.

"People have been co-opting and telling my part in this story for decades. In fact, it wasn't until the past few years that I've been able to fully reclaim my narrative; almost 20 years later," Lewinsky shared with Vanity Fair back in August, regarding why she jumped at the chance to work with Murphy on the project. "I'm so grateful for the growth we've made as a society that allows people like me who have been historically silenced to finally reintroduce my voice to the conversation."

With her new projects, Lewinsky is clearly committed to owning her own narrative, and allowing others who have fallen prey to public scrutiny to do the same.