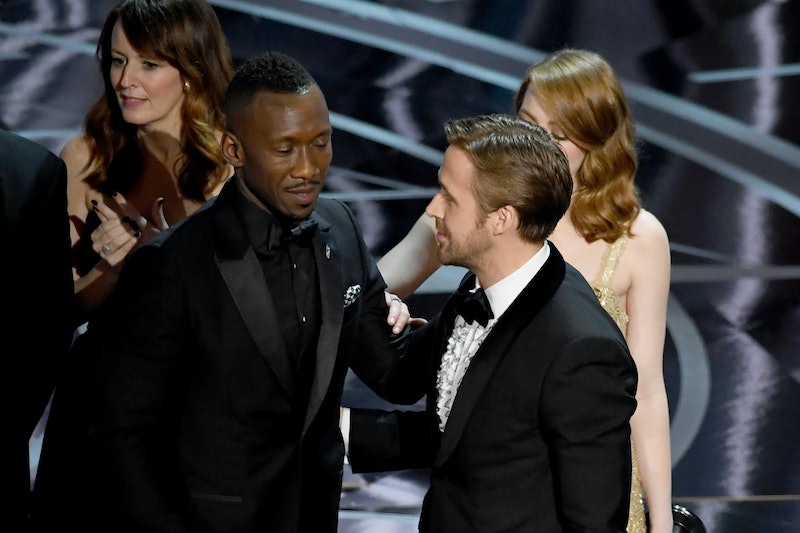 Well, the 2017 Oscars ended on one hell of an awkward moment. The Best Picture winner was mixed up when La La Land was announced as the victor even though Moonlight had actually won the award. The mistake was corrected soon enough, but not before the entire crew of La La Land had already taken the stage and begun giving a speech. In fact, the audience had to be reassured that this was not a joke or a gag, that there had been an honest mistake, and that Moonlight really had won before the Moonlight cast, bewildered, came to the stage. So while Moonlight may have ultimately won best picture, it was robbed of its chance to celebrate people of color and LGBTQ individuals having their stories told and work affirmed.

Imagine it: the Academy Awards have already gone beyond its stated end time, meaning that everyone still watching wants to go to bed. Then, the biggest award of the night goes to La La Land, and their victory lap begins. By the time the Moonlight team realized that that moment was supposed to be theirs, they had to shove a befuddled speech in among the chuckles and good-natured apologies of their colleagues. And the content of the speech will barely matter at all, because tomorrow no one's going to be talking about it. Instead, they'll be talking about how badly the Oscars screwed things up.

I had stopped paying attention to the ceremony except to roll my eyes when La La Land predictably won, and only tuned back in when Moonlight's actual victory was confirmed. As the Moonlight team spoke, I, and probably thousands of other viewers, was too consumed with frantically Googling "how could this happen?" to pay attention to their words. Others were tweeting to chime in on the ridiculousness and offensiveness of the moment, rather than paying attention to it either.

We shouldn't have been laughing. We should have been applauding, and then holding the Academy to the responsibility of maintaining or exceeding this standard next year. Instead, people will make snide remarks. They'll talk about this mix-up like it's a joke, a goof, or a clear embarrassment on the part of everyone there. They'll talk about how offensive it was that Moonlight's moment was shut down. They'll talk about how relieved they are that La La Land didn't really win. Or how upset they are that La La Land didn't really win. Maybe they'll talk about how Lion or Hidden Figures should have won. But what they won't be talking about is the Best Picture acceptance speech, or this groundbreaking moment, or what it means for people of color and LGBTQ individuals and for actors and filmmakers who belong to those communities. Why would they? It will forever be overshadowed by the five minutes that came before it.