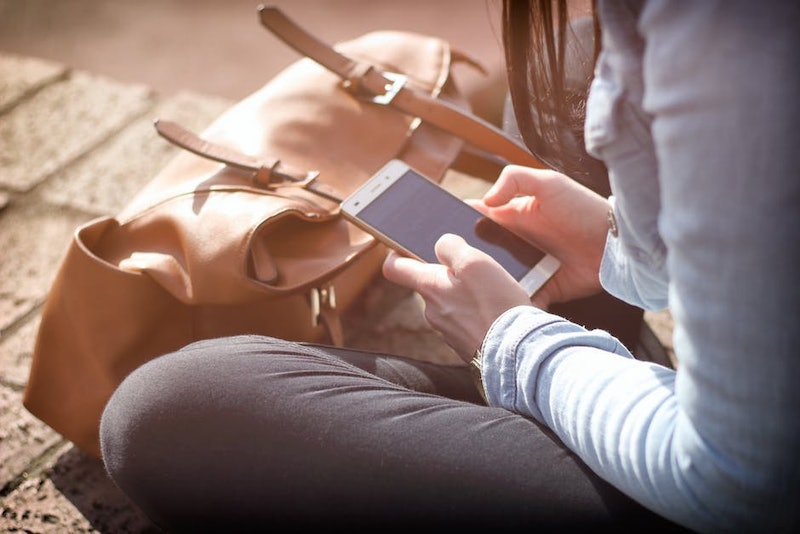 If you’ve ever wondered, “What is phubbing and why won’t everyone shut up about it?” then you probably haven’t had it happen to you. And consider yourself lucky. Because so many of us have, and research confirms — for about the billionth time — that it’s messing with our relationships. Basically, phubbing is snubbing someone (often a romantic partner) for, you guessed it, a phone. You’ve almost certainly been there. You’re in the middle of a story or talking about something really important to you — and suddenly your friend or SO is just scrolling through Twitter. Suddenly they’re answering you in monosyllables and nodding along with their eyes glazed over. It's. So. Effing. Annoying.

And it's actually more than annoying — it's worrying. "Mobile phones can have a negative impact on our attention span, as well as our ability to open up and communicate with others,” David Brudö, co-founder and CEO at mental wellbeing and personal development app Remente, tells Bustle. And, to be honest, that’s scary enough. But now research from the Hankamer School of Business of Baylor University confirms that it may be having a huge effect on our relationships with our loved ones. They surveyed 450 people and found that a whopping 46 percent had been a victim of phubbing from their partner. But that wasn’t the really shocking part.

I know, it’s easier said than done. We’re all so used to having our phones at the end of our couches, our beds, our hands. But is it really worth fighting with your partner just because you’re stuck in an aimless scrolling cycle? I don’t think so. So it’s time to cut back, but you might want to start with baby steps. “Try to cut back on using your phone gradually," Brudö tells Bustle. "Try simply not checking it unless you actually need to use it. Or, leave your phone at home when you go out for dinner or grocery shopping. This way it will help you to change your habits in small dosages."

Seriously, once you get used to not having, it won’t seem like such a big deal. If you’re really brave, you could even try going cold turkey— and to be afraid to call in backup. "Team up with friends who wish to join the challenge of a digital detox,” Brudö says. “It may be easier to do it with close friends than by yourself and you can keep each other on track!" I’m sure your partner will be more than happy to join you.

It’s easy to get complacent about our phone use. Sure, we know it’s bad— but everyone does it. And when everyone around you is doing it, it’s really easy to let yourself off the hook. But before you do, make sure it’s not impacting your relationship. It’s just not worth it.