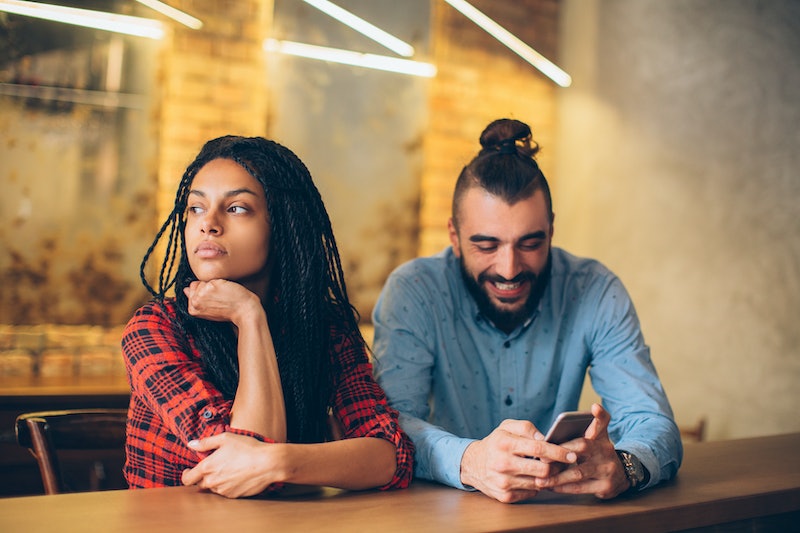 Smartphone addiction is no joke. I can hardly force myself to crawl out of bed until I've thoroughly checked all my social media apps (and taken a few #WokeUpLikeThis selfies for good measure). Whether you embrace the digitization whole-heartedly or roll your eyes at people whose phones are practically glued to their hands, it's fascinating to learn about the digital habits of Millennials compared to other generations.

A new survey by mobile intelligence developer Delvv asked 355 Americans, ages 18 and up, about their connection to their phone, family, friends, and more. The most shocking finding? Nearly one in three Americans would rather give up all forms of sex for three months than trade in their smartphone for a 'dumb phone' for one week.

It might sound crazy, but think about how much you use your phone's 'smart' functions. You'd get lost without Google Maps, starve without Seamless, and get bored AF on your commute sans podcasts. And in the grand scheme of life, three months without sex is only a small dry spell, so it's actually a pretty decent tradeoff, IMO. But it's not just our apps that cause our addiction — there are tons of social factors at play that influence our smartphone attachment.

"Young adults have grown up immersed in a culture of instant gratification," Felice Gabriel, founder at Delvv, tells Bustle. "It is both the fear of missing out on new information and of being bored that explain why this age group relies so heavily on their smartphones. Smartphones deliver information instantaneously across the many social channels, providing a sense of constant connectedness and validation from being the first to know someone’s news and/or receive positive feedback and approval about their updates."

Think of how out of the loop you'd feel if you were the last one to learn about Kim Kardashian exposing Taylor Swift on Snapchat, or how isolated you'd feel if you went days without any notifications lighting up your home screen. While there's certainly nothing wrong with those feelings, it's also important to balance online connections with IRL connections. "It’s important to recognize what is truly a priority from items that are less urgent and can wait," Gabriel says. "Sometimes anticipating the next ping from your phone, or waiting for the latest Instagram upload can detract from being present/living your actual life."

If you've ever tried to Instagram brunch before it got cold, that probably hits a little too close to home. Still, it's nothing to be ashamed of, because you're certainly not alone. Here are seven revelations about Americans' relationships with our smartphones, via the Delvv Digital Habits Survey 2016.

1. 29 Percent Of Americans Would Give Up Sex For Their Smartphones

When choosing between a week without a smartphone and three months sans sex, almost a third of people would choose the latter. Not just intercourse either — all kinds of sexual interactions. In addition to sex, 79 percent of people (and 84 percent of Millennials, aka those between 18-29) would rather give up alcohol for one month than their smartphone for a week.

2. Millennials Feel They Should Spend Less Time On Their Phones

Compared to Gen Xers (those aged 30-59) and Baby Boomers (60+ folks), Millennials feel guiltier about how much time they spend on their phones. 61 percent of Millennials thought they should be on their smartphones less often, compared to only 40 percent of Gen Xers and 14 percent of Baby Boomers. It turns out we're not totally blind to the detrimental effects of smartphone addiction (or maybe we just miss the days of the flip phone).

3. 'Phone Snubbing' In Relationships Is A Real Thing

Phone snubbing, or 'phubbing', may sound rude, but really it's all about being courteous to those you're with IRL. 68 percent of people surveyed said that if they text someone who's at dinner with company, they should wait until after dinner to check their phone.

6. Millennials Text Instead Of Returning Calls

Unless you're my mom or my best friend, I'm definitely guilty of this, and I'm not alone: 23 percent of Millennials said they'd text someone asking why they called rather than returning the call. On the flipside, only 10 percent of Gen Xers and 4 percent of Baby Boomers do the same.

7. If You're Busy, It's OK Not To Answer The Phone

Apparently we're not all as selfish as we probably assumed. 69 percent of people surveyed said they believe if a person receives a phone call while busy, it's OK to not answer and just call back when it's convenient. How thoughtful of us!